In year just past, we experienced many things-a prelude to a Presidential election, a renewal of terrorist concerns,

a trip to Pluto-but in the investment markets, we will look back and yawn.  Despite some entertaining ups and downs, particularly in the third quarter of the year, the markets ended pretty much where they began, eking out small gains and losses pretty much across the board.

The final three months of the year provided investors with gains that were tantalizingly close to wiping out the losses of the previous three. The Wilshire 5000--the broadest measure of U.S. stocks-gained 5.89% in the fourth quarter of 2015, ending the year down a mere 0.25%.  The comparable Russell 3000 index was also essentially flat, gaining 0.48% for the year.

This was a year to forget for investors in small company stocks.  As measured by the Wilshire U.S. Small-Cap index, investors posted a small 2.62% gain over the last three months of the year, but in the end the index had lost 4.86% over the entire 12 months, dragging many diversified portfolios into negative territory.  The comparable Russell 2000 Small-Cap Index finished the forgettable year down 4.41%, while the technology-heavy Nasdaq Composite Index rose 8.38% in the fourth quarter, to finish the year up 5.73%.

International investments contributed a slight decline to overall portfolio returns.   The broad-based EAFE index of companies in developed foreign economies gained 4.37% in the fourth quarter of the year, but finished the year down 3.30% in dollar terms.  In aggregate, European stocks lost 6.06% for the year, while EAFE's Far East Index was up 4.72%.  Emerging markets stocks of less developed countries, as represented by the EAFE EM index, lost 16.96% for the year.

Looking over the other investment categories, real estate investments, as measured by the Wilshire U.S. REIT index, gained 7.47% during the year's final quarter, wiping out previous losses to finish up 4.23% for calendar 2015.

Many investors will look at their statements and see lower returns than the indices indicate, in part because a portion of their portfolio was invested in commodities-by far the biggest loser of 2015.  Commodity investments are considered an excellent diversifier, and nobody can tell when they're going to add significantly to a portfolio's value, but in the last 12 months, they continued a longstanding losing streak, with the Standard & Poor's GSCI falling 16.63% in the fourth quarter.  Some have speculated that the largest contributor, a surprising continuation of the decline in oil prices, may have been accelerated by a Saudi Arabian attempt to flood the oil markets as a failed strategy to put American frackers out of business.

By the end of the year, investors in the commodity index were sitting on a whopping 32.86% loss.  Don't look for a return to high oil prices in the near future, as oil production from post-sanctions Iran will soon hit the market, adding to what economists are already describing as an oil and gas glut.

Meanwhile, gold prices were off 10% in 2015, and gold investments actually outperformed silver, copper, platinum and palladium-the latter losing more than 30% in the past 12 months.

As always, there were many unpredictable anomalies in the investment world.  In the currency markets, anyone lucky enough to have speculated on the Somali shilling would have experienced a nice 20% return for the year.  A bet on the Azerbaijani manta, however, would have lost you 50%.   In international stock markets, the Johannesburg (South Africa) market index gained more than 80%, while the Ukrainian Equities Index dropped the farthest, falling almost 60%.

Meanwhile, bond investors started the year, as in years past, expecting that 2015 would finally see interest rates rise across the board.  Many professionals have been holding very low-yielding short-term instruments or cash in their bond portfolio allocations as a defensive measure, and had to endure almost zero returns without the satisfaction of having ducked the long-anticipated nasty downturn in bond values.

What's going to happen in 2016?  Of course, nobody knows with any degree of certainty.  But many professional investors are approaching the New Year with an unusual degree of caution.  By most metrics, U.S. stocks are pricier than their historical averages.  That doesn't mean they can't get more so, but it seems unlikely that people will pay a lot more for a dollar of earnings in the coming year than they will today.

And, yes, there are some warning signs on the horizon.  Nobody seems to know exactly what to make of the high-yield bond market.  Is the recent downturn is a sign of some long-term problems or a blip on the screen?  One could make the argument that emerging market governments and companies with low credit ratings have gotten away with giving their lenders extremely low (by historical standards) interest rates.  If rates rise, investors may want to sell those bonds, and there could be a sudden rush for the exits, potentially causing liquidity problems for the funds that are holding them.  But one would expect those funds to be preparing for this possibility, and similar dour forecasts have, in the past, had a habit of not showing up in the real world.

Another possible warning sign is China, which is becoming the 800 pound gorilla of the global markets.  The Shanghai Composite Index lost 43% of its value during a frightening summer sell-off, and China's economic growth has clearly slowed from the pell-mell double-digit growth rates of the past 20 years.  But lost in the hand-wringing is the fact that China's primary index finished the year with a 9% gain overall.  The selloff simply wiped out most of an enormous bull run in the first three months of the year.  More troubling than the losses is the government's willingness to try to manipulate its equity markets, which means it's hard to discern the fair value of individual Chinese stocks.

Finally, we've finally seen the Federal Reserve Board's first tentative effort to let the short-term fixed income markets find their natural level, which has already led to higher mortgage rates.  Nobody knows if or when the Fed will raise rates again in the New Year, or what the impact would be, but the fact that it's an election year, and the economy is still not exactly robust, suggests that the central bank's policymakers will proceed very cautiously.

None of this is a traditional recipe for a powerful bull run in 2016, but the truth is, we have no idea what returns will be in the coming year.  We do, however, have confidence that any future bear market will be followed by a subsequent recovery, and eventually (who knows when?) the U.S. and European markets will again be testing and surpassing their previous record highs.

Will that happen in the next 12 months?   All we can say is that the markets often punish those who try to outsmart them.  If the market goes down in the coming year, it will mean that we all will be able to buy stocks at cheaper prices in anticipation of the next rise-whenever and however it arrives. 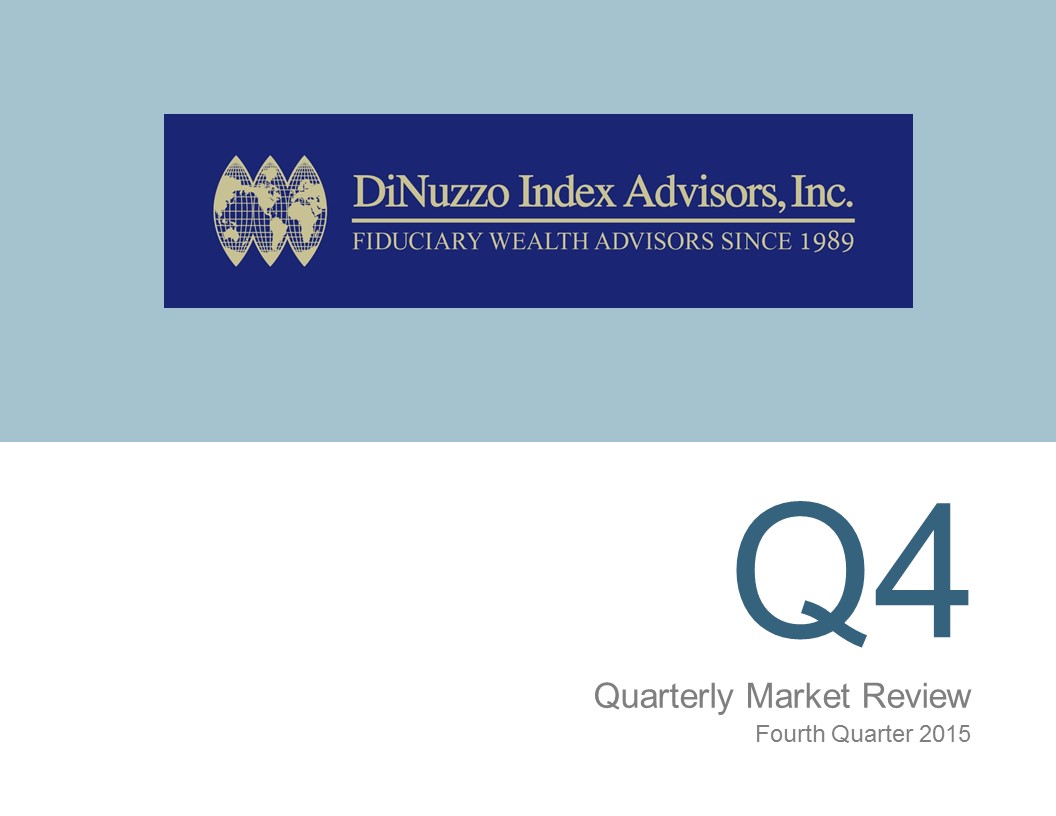 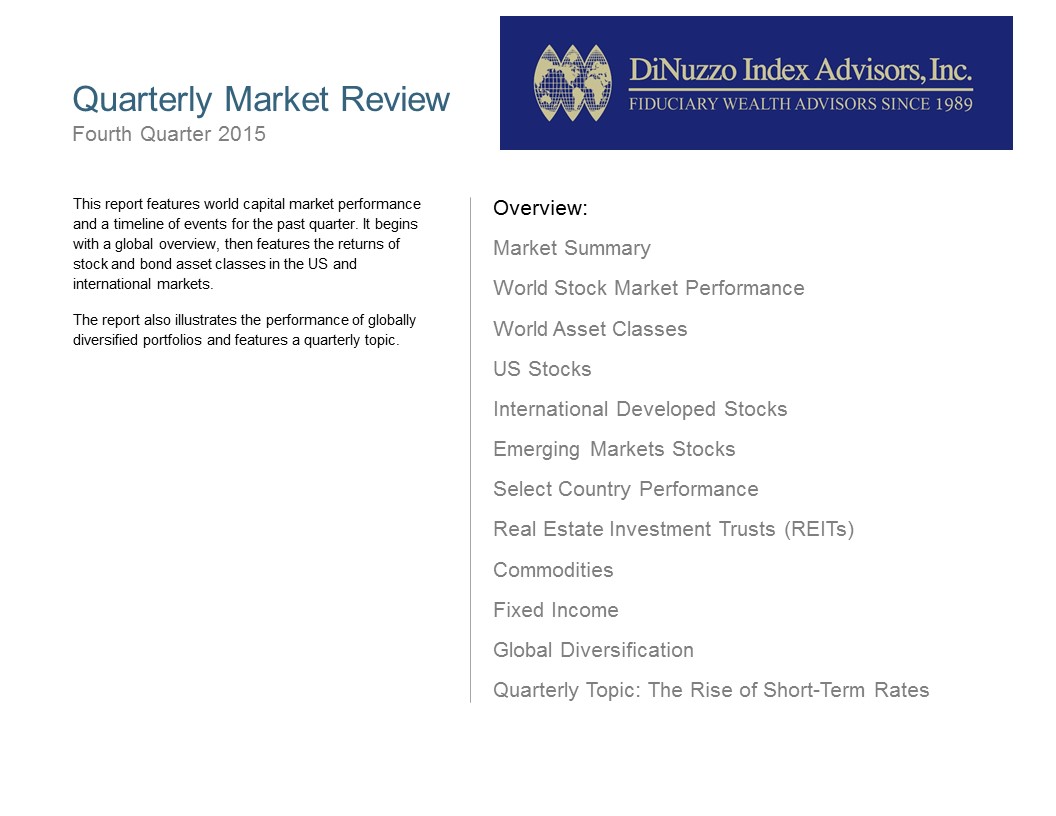 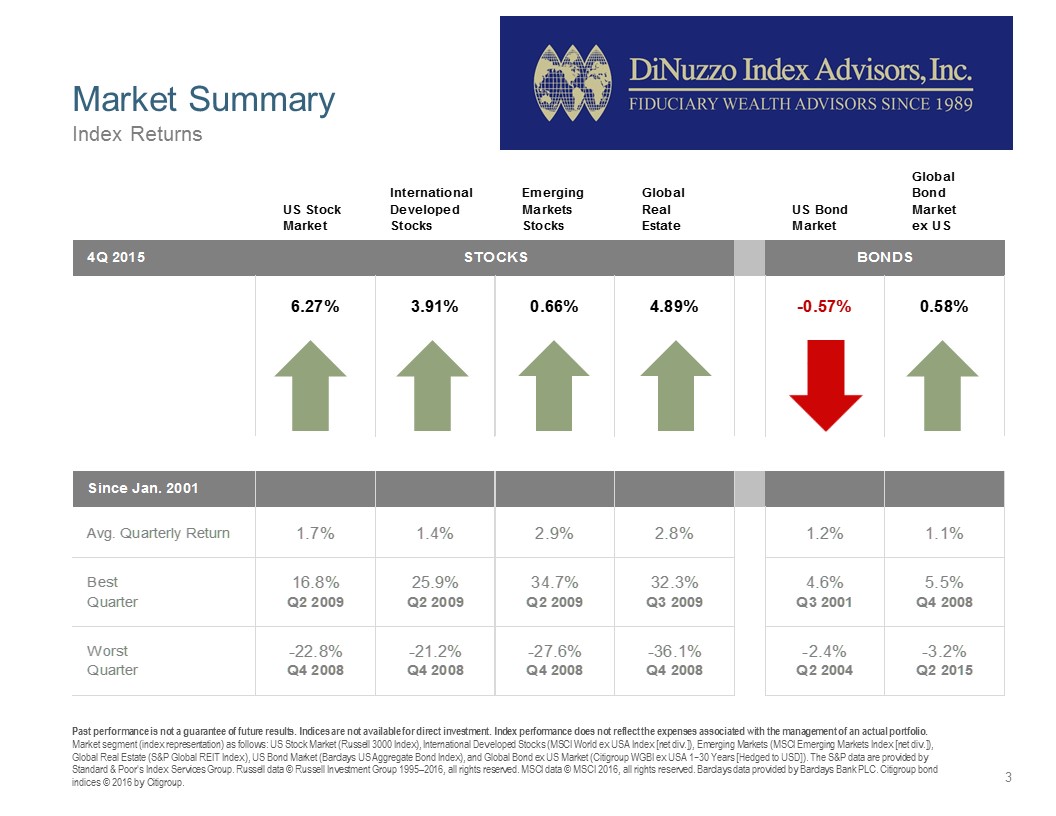 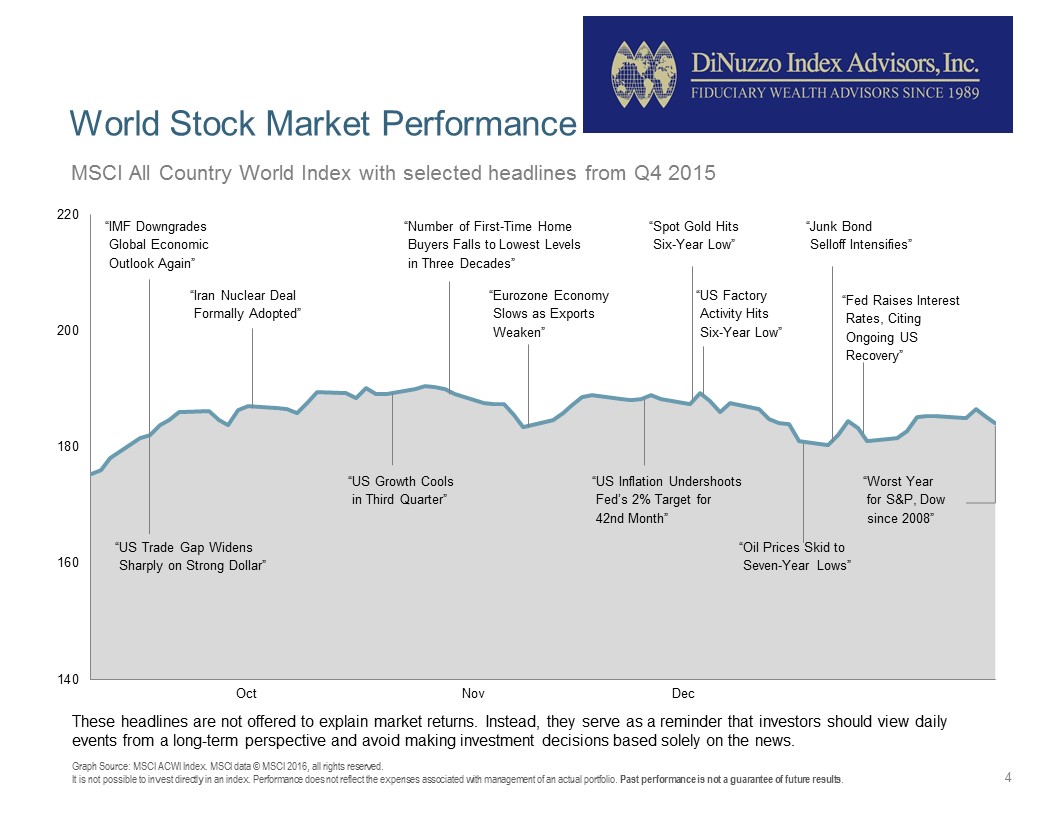 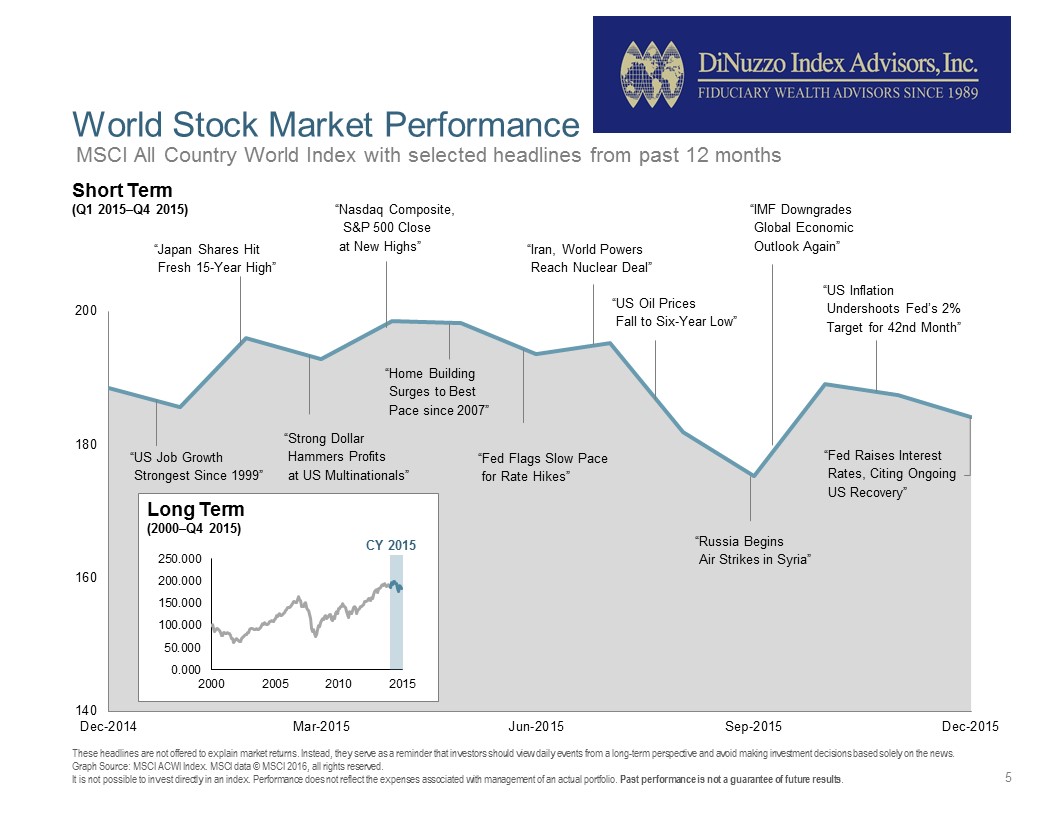 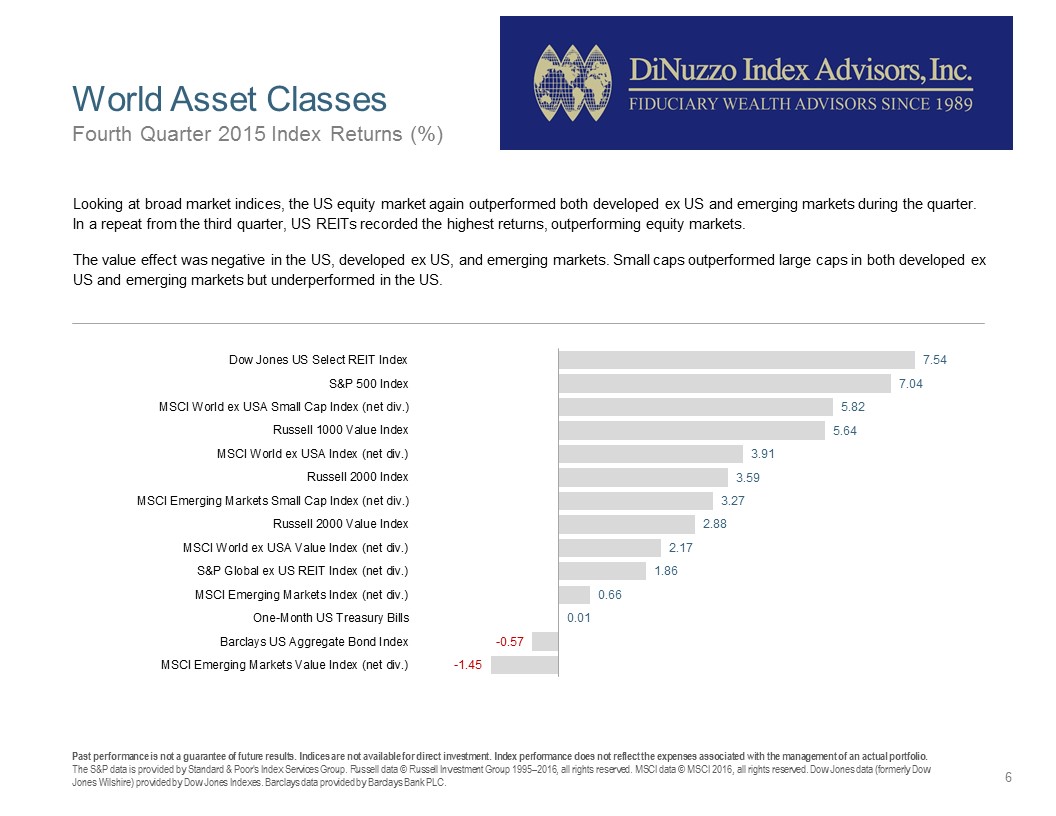 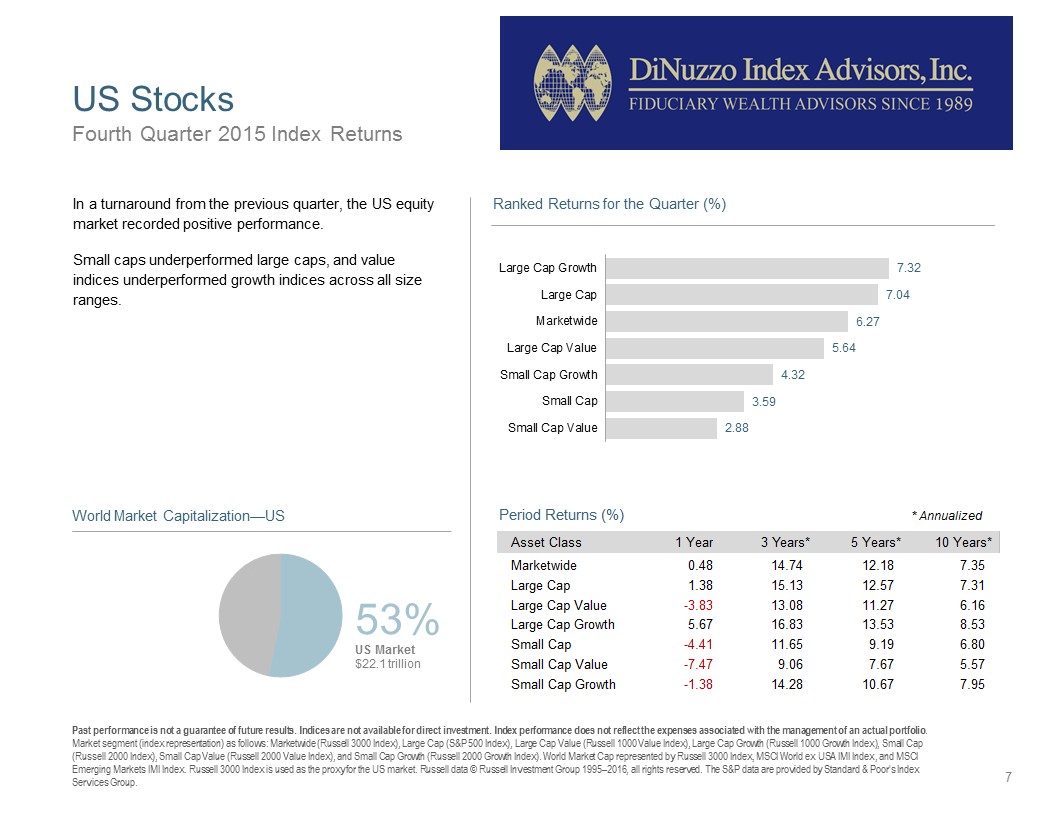 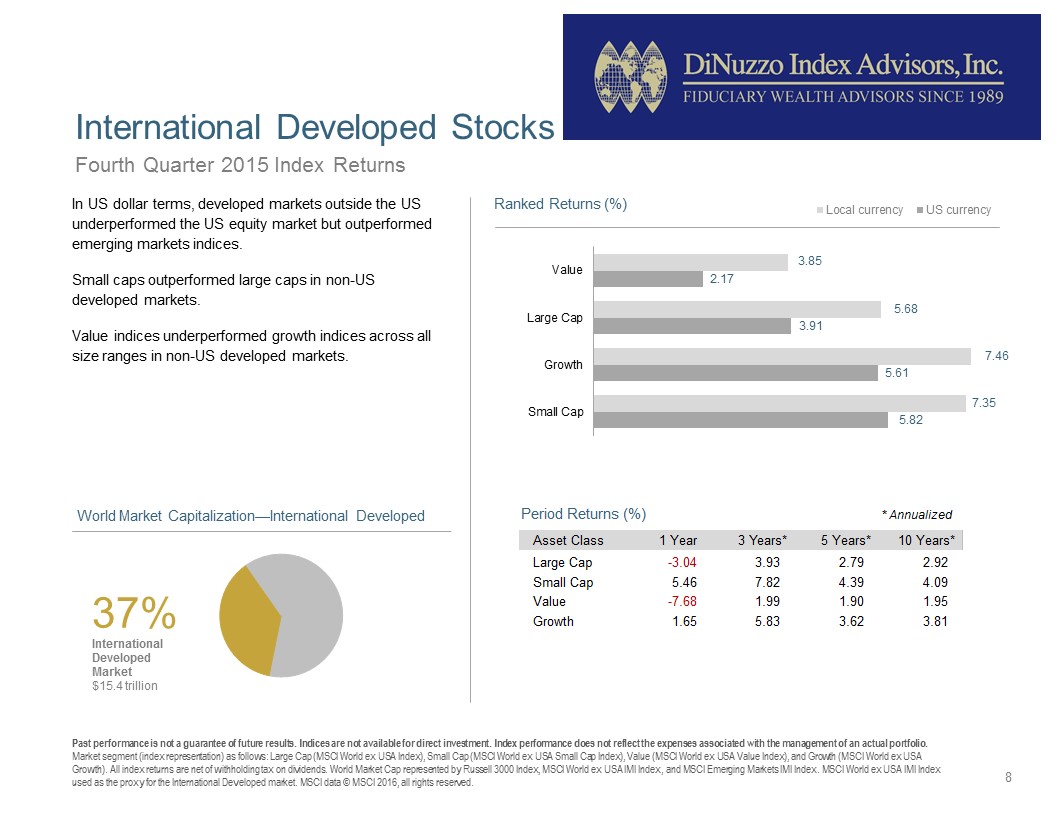 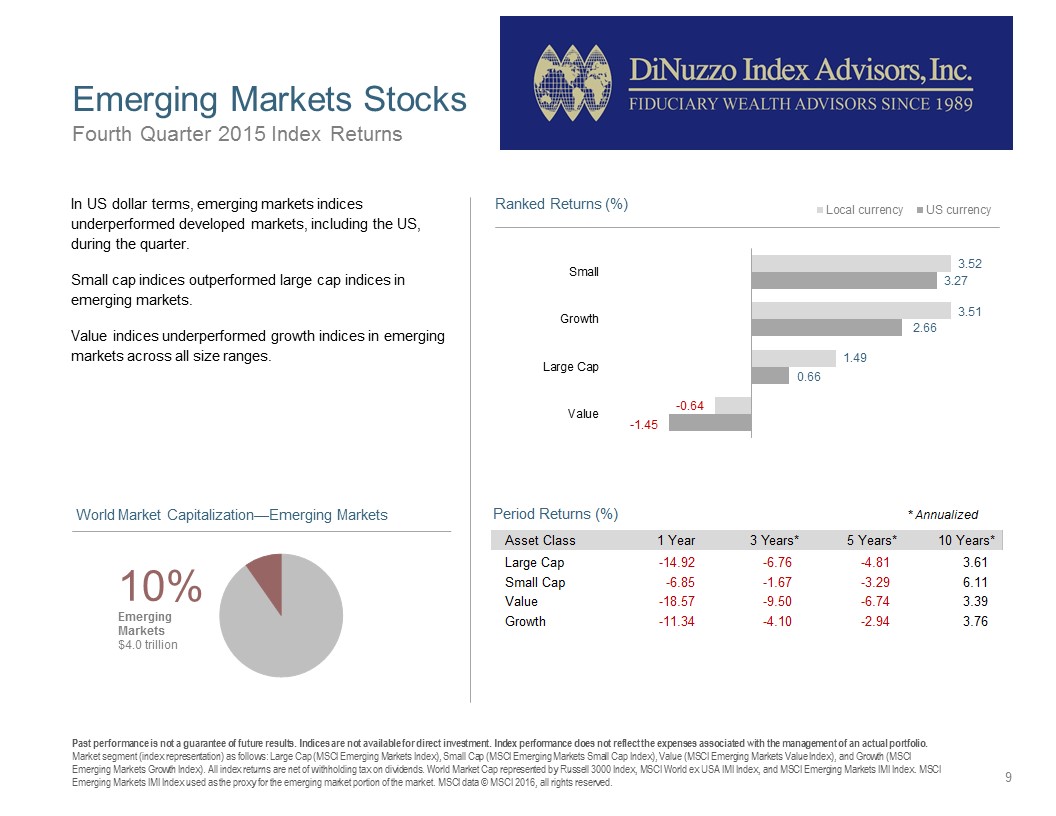 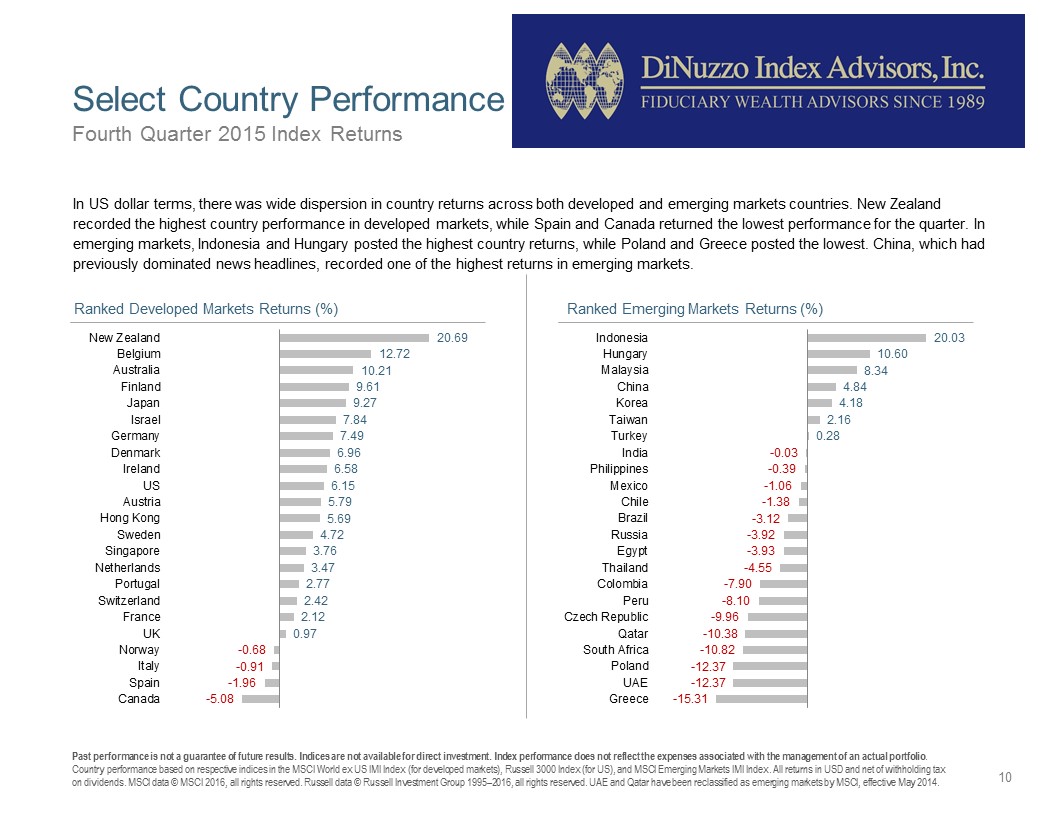 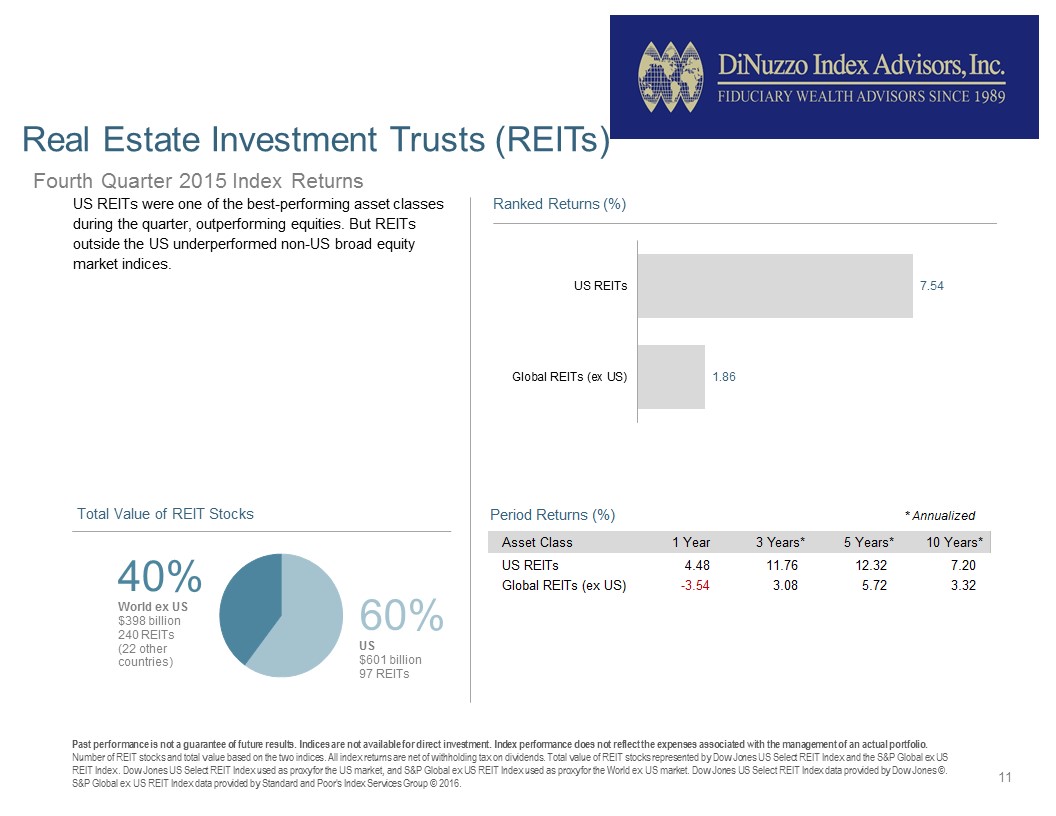 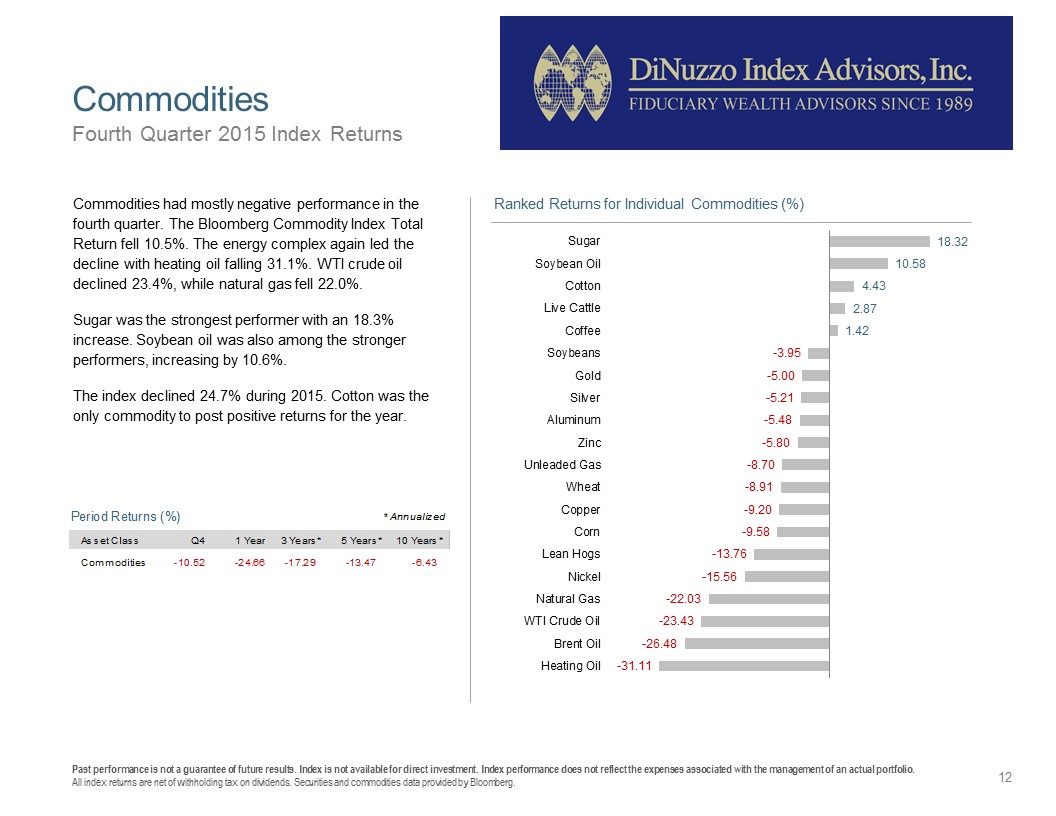 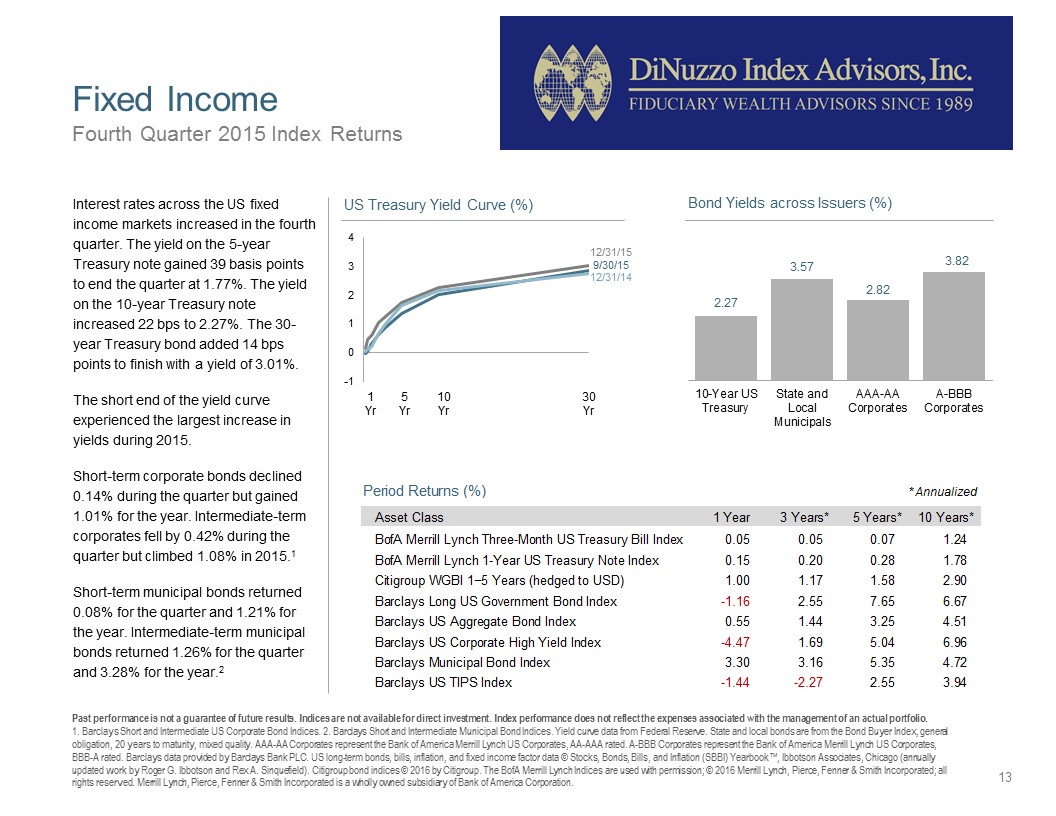 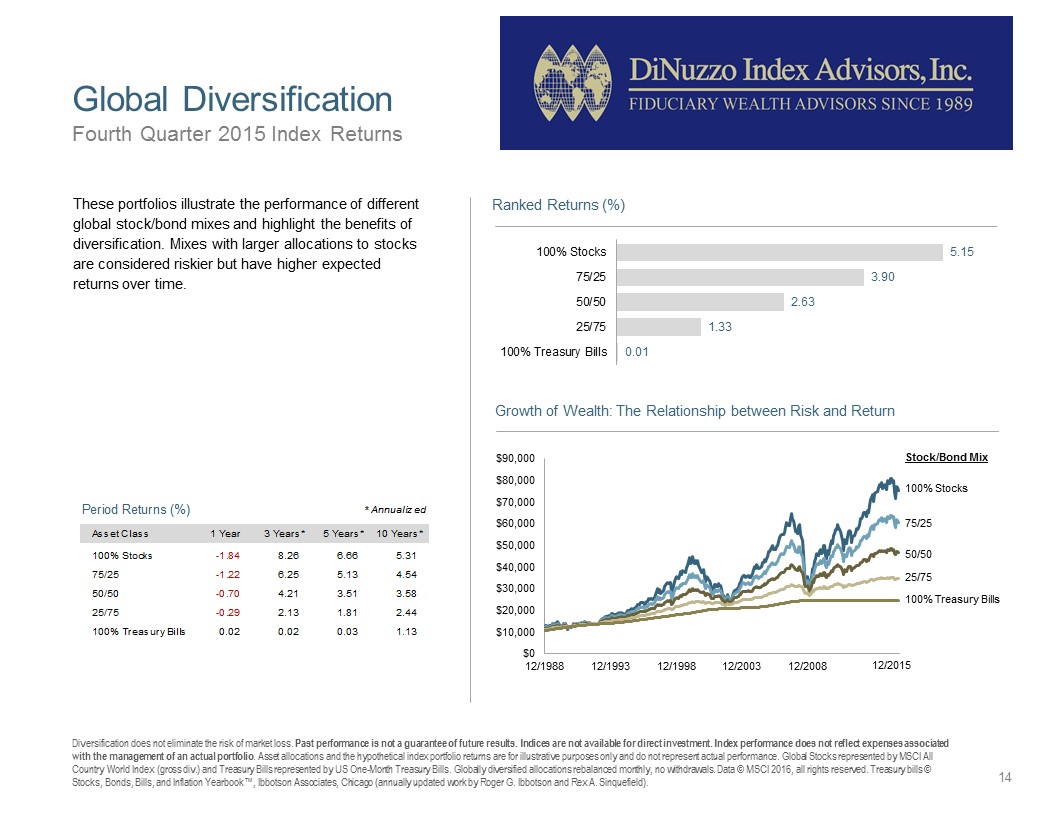 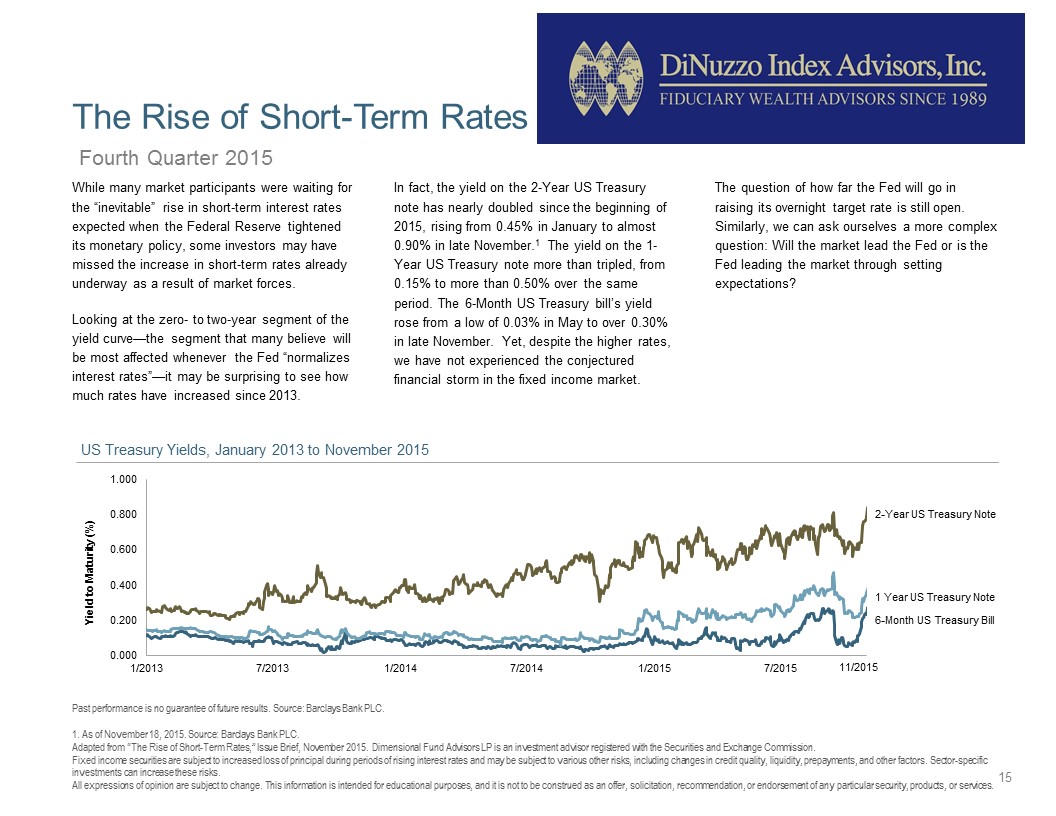