to overhaul our health care system, but professional advisors are studying the newly-released nine-page proposal closely nonetheless.  We only have the bare outlines of what the initial plan might look like before it goes through the Congressional sausage grinder:

We would see the current seven tax brackets for individuals reduced to three - a 12%, rate for lower-income people (up from 10% currently), 25% in the middle and a top bracket of 35%.  The proposal doesn't include the income cutoffs for the three brackets, but if they end up as suggested in President Trump's tax plan from the campaign, the 25% rate would start at $75,000 (for married couples), and joint filers would start paying 35% at $225,000 of income.

The dreaded alternative minimum tax, which was created to ensure that upper-income Americans would not be able to finesse away their tax obligations altogether, would be eliminated under the proposal.  But there is a mysterious notation that Congress might impose an additional rate for the highest-income taxpayers, to ensure that wealthier Americans don't contribute a lower share than they pay today.

The initial proposal would nearly double the standard deduction to $12,000 for individuals and $24,000 for married couples, and increase the child tax credit, now set at $1,000 per child under age 17.  (No actual figure was given.)

At the same time, the new tax plan promises to eliminate many itemized deductions, without telling us which ones other than a promise to keep deductions for home mortgage interest and charitable contributions.  The plan mentions tax benefits that would encourage work, higher education and retirement savings, but gives no details of what might change in these areas.

The most interesting part of the proposal is a full repeal of the estate tax and generation-skipping estate tax, which affects only a small percentage of the population but results in an enormous amount of planning and calculations for those who ARE affected.

The plan would also limit the maximum tax rate for pass-through business entities like partnerships and LLCs to 25%, which might allow high-income business owners to take their gains through the entity rather than as income and avoid the highest personal brackets.

Finally, the tax plan would lower America's maximum corporate (C-Corp) tax rate from the current 35% to 20%.  To encourage companies to repatriate profits held overseas, the proposal would introduce a 100% exemption for dividends from foreign subsidiaries in which the U.S. parent owns at least a 10% stake, and imposes a one-time "low" (not specified) tax rate on wealth already accumulated overseas.

What are the implications of this bare-bones proposal?  The most obvious, and most remarked-upon, is the drop that many high-income taxpayers would experience, from the current 39.6% top tax rate to 35%.  That, plus the elimination of the estate tax, plus the lowering of the corporate tax (leading to higher dividends) has been described as a huge relief for upper-income American investors, which could fuel the notion that the entire exercise is a big giveaway to large donors.  But the mysterious "surcharge" on wealthier taxpayers might take away what the rest of the plan giveth.

But many Americans with S corporations, LLCs or partnership entities would potentially receive a much greater windfall, if they could choose to pay taxes on their corporate earnings at 25% rather than nearly 40%.  (Note: The Trump organization is a pass-through entity.)

A huge unknown is which deductions would be eliminated in return for the higher standard deduction.  Would the plan eliminate the deduction for state and local taxes, which is especially valuable to people in high-tax states such as New York, New Jersey and California, and in general to higher-income taxpayers who pay state taxes at the highest rate?

Currently, about one-third of the 145 million households filing a tax return - or roughly 48 million filers - claim this deduction.  Among households with income of $100,000 or more, the average deduction for state and local taxes is around $12,300.  Some economists have speculated that people earning between $100,000 and around $300,000 might wind up paying more in taxes under the proposal than they do now.  Taxpayers with incomes above $730,000 would hypothetically see their after-tax income increase an average of 8.5 percent.

Big picture, economists are in the early stages of debating how much the plan might add to America's soaring $20 trillion national debt.  One back-of-the-envelope estimate by a Washington budget watchdog estimated that the tax cuts might add $5.8 trillion to the debt load over the next 10 years.  According to the Committee for a Responsible Federal Budget analysis, Republican economists has identified about $3.6 trillion in offsetting revenues (mostly an assumption of increased economic growth), so by the most conservative calculation the tax plan would cost the federal deficit somewhere in the $2.2 trillion range over the next decade. 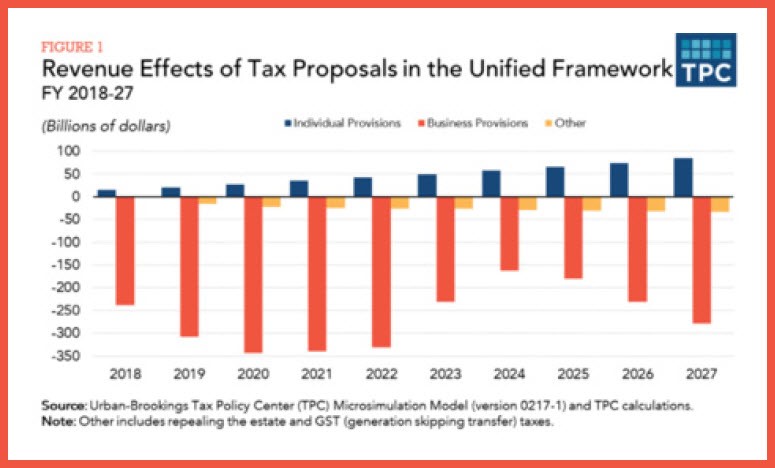 These cost estimates have huge political implications for whether a tax bill will ever be passed.  Under a prior agreement, the Senate can pass tax cuts with a simple majority of 51 votes - avoiding a filibuster that might sink the effort - only if the bill adds no more than $1.5 trillion to the national debt during the next decade.

That means compromise.  To get the impact on the national debt below $1.5 trillion, Congressional Republicans might decide on a smaller cut to the corporate rate, to something closer to 25-28%, while giving typical families a smaller 1-percentage point tax cut.  Under that scenario, multi-national corporations might be able to bring back $1 trillion or more in profit at unusually low tax rates, and most families might see a modest tax cut that will put a few hundred extra bucks in their pockets.

Alternatively, Congress could pass tax cuts of more than $1.5 trillion if the Republicans could flip enough Democratic Senators to get to 60 votes.  The Democrats would almost certainly demand large tax cuts for lower and middle earners, potentially lower taxes on corporations and higher taxes on the wealthy.  Would you bet on that sort of compromise?