For all the drama we’ve experienced in the past few months, the second quarter of the New Year has brought us slightly positive

returns in many of the U.S. and global indices, and disturbing but ultimately not harmful news in Europe, China and Puerto Rico.

The Wilshire U.S. Large Cap index gained 0.11% for the quarter, and is now up 1.38% for 2015.  The Russell 1000 large-cap index has gained 1.71% for the first half, while the widely-quoted S&P 500 index of large company stocks posted a loss of 0.01% in the second quarter, and now stands up a sliver at 0.20% after the first half of the year.  However, the month of June is notable because the index declined more than 2%--the worst performance since January, and the quarterly loss snaps a nine-quarter winning streak.

The Wilshire U.S. Mid-Cap index lost 1.20% for the quarter, but is still up a comfortable 4.50% as we head into the third quarter.  The Russell Midcap Index has gained 2.35% so far this year.

Small company stocks, as measured by the Wilshire U.S. Small-Cap index, gave investors a 0.46% loss during the latest three months, but the index is up 4.03% so far in 2015.  The comparable Russell 2000 Small-Cap Index is up 4.75% in the first half of the year, while the technology-heavy Nasdaq Composite Index gained 1.37% for the quarter, and stands at a 4.70% gain for the first half of the year.

Meanwhile, in the global markets, the broad-based EAFE index of companies in developed foreign economies lost 0.37% in dollar terms in the second quarter of the year, but has posted a 3.81% gain for the year.  In aggregate, European stocks lost 0.91%, although they are still up 1.91% for the year.  Emerging markets stocks of less developed countries, as represented by the EAFE EM index, were down 0.24% for the quarter, but are up 1.67% for the year.

For the second consecutive quarter, investors experienced a mild roller coaster of up and down days in the U.S. and global markets, small panics and surprising rallies that ultimately canceled each other out in what trading professionals refer to as a sideways market. For the second consecutive quarter, investors are looking over their shoulders at interest rates, waiting for the Federal Reserve Board to finally take its foot off of interest rates, for bond yields to jump higher, making bonds more competitive with stocks and triggering an outflow from the stock market that could (so the reasoning goes) cause a bear market in U.S. equities.

But of course investors have been waiting for this shoe to drop for the better part of three years, and meanwhile, interest rates have remained at historically low levels.  The Bloomberg U.S. Corporate Bond Index now has an effective yield of 3.34%.  30-year Treasuries are yielding 3.13%, up from 2.90% in July 2014, and 10-year Treasuries currently yield 2.36%, down from 2.54% at this time last year.  This looks remarkably low until you realize that of all the European nations, only Greece on the verge of default (with 14.56% effective yields on bonds sold on the secondary market) and Portugal (2.96% and shaky) are more generous.  German 10-year bonds are paying 0.76% and Swiss bonds just 0.06%, making the (arguably) safer U.S. Treasuries look like a high-yield bargain.

At the low end, you need a microscope to see the yield on 3-month U.S. T-bills, at 0.01%.   6-month bills are only slightly more generous, at 0.11%. Your money earns almost as much when it sits under your mattress.  Interestingly, 30-year municipal bonds are yielding 3.36% even though they’re federally tax-exempt.

There is widespread speculation that the Fed will raise the Fed funds rate by 0.25% in September, which is sure to cause a mild panic among ordinary investors and quick-twitch traders, despite the fact that Federal Reserve chairperson Janet Yellen has all but tattooed on her forehead her intention to raise rates sometime this year—and finally put the nightmare of 2008 behind us.  Behind that, you can expect a continuing churn in the markets caused by the uncertainty over whether Greece will leave the Eurozone and default on its debt—and wild (and almost certainly specious) speculation that maybe Spain, Portugal, Ireland, and even Italy will decide to follow suit.  They won’t, but the fact that some people will believe it’s possible will send markets reeling for essentially no reason.

A potentially bigger problem for the U.S. investment markets is flying under the radar.  The U.S. island territory of Puerto Rico, which has taken full advantage of its ability to issue municipal bonds that are federally tax-exempt in all 50 states, is dangerously close to defaulting on roughly $72 billion in bond debt – much of it held  in broker-sold mutual funds that have paid higher-than-average interest rates over the past year or two.  In aggregate, U.S. banks only hold about $14 billion of sovereign Greek debt, which is about 19% of what they and mutual funds own of Puerto Rican debt.  This is yet another example of tempting interest rates coming at very high risk; some kind of a default is likely.

Why?  Puerto Rico now owes its muni investors the equivalent of $20,000 for every man, woman and child living on the island.  The debt is almost exactly equal to the entire GDP of the island territory.

Another worry is China, whose Shanghai Composite Index has fallen 22% over a ten day period after a torrid 32% climb for much of the first half of the year.  Analysts were visibly scratching their heads during the short, quick Bull Run, noting that corporate profits are actually lower than a year ago.  The rally appears to have been fueled by an explosion in margin buying, which reached a record 8% of total market capitalization—a situation which often precedes a dramatic price collapse.

All of these interesting excesses and potential catastrophes are unlikely to affect the average person’s diversified portfolio; only broker-sold funds are high investors in Puerto Rico, and some of them are now being sued.  The Greek situation will lead to uncertainty and volatility, but not to long-term declines in the value of U.S. or even European stocks generally.  China’s market fall will be temporary, and seems only to be giving back speculative gains—which are probably a good thing for the underlying fundamentals.

Meanwhile, the jobs picture in the U.S. seems to be improving by the day, oil prices are still low, and America is on a path to energy independence, which would have seemed unthinkable just a few years ago.  Yes, the U.S. stock markets are long overdue for a 10% correction, but if you know when that will happen—or even what year—then you have a better handle on the future than most senior economists.

It bears repeating: investors lose far more money in opportunity costs by trying to avoid future market downturns while the markets are still going up, than by holding their ground during actual downturns in anticipation of a recovery.  In every case so far, including world wars, the threat of nuclear war, Presidential assassinations and terrorist attacks on U.S. soil, the U.S. market has eventually made up the ground it lost in every bear market we’ve experienced.

The scary news today is, in the long run, nothing more than white noise, a lot of sound and fury signifying nothing important to the long, slow process of companies and their employees building value with their daily work activities.  People who listen to the alarmists tend to lose out on solid returns.  You listen to the alarmists, or believe that your portfolio is at risk because of this or that scary headline, at your peril. 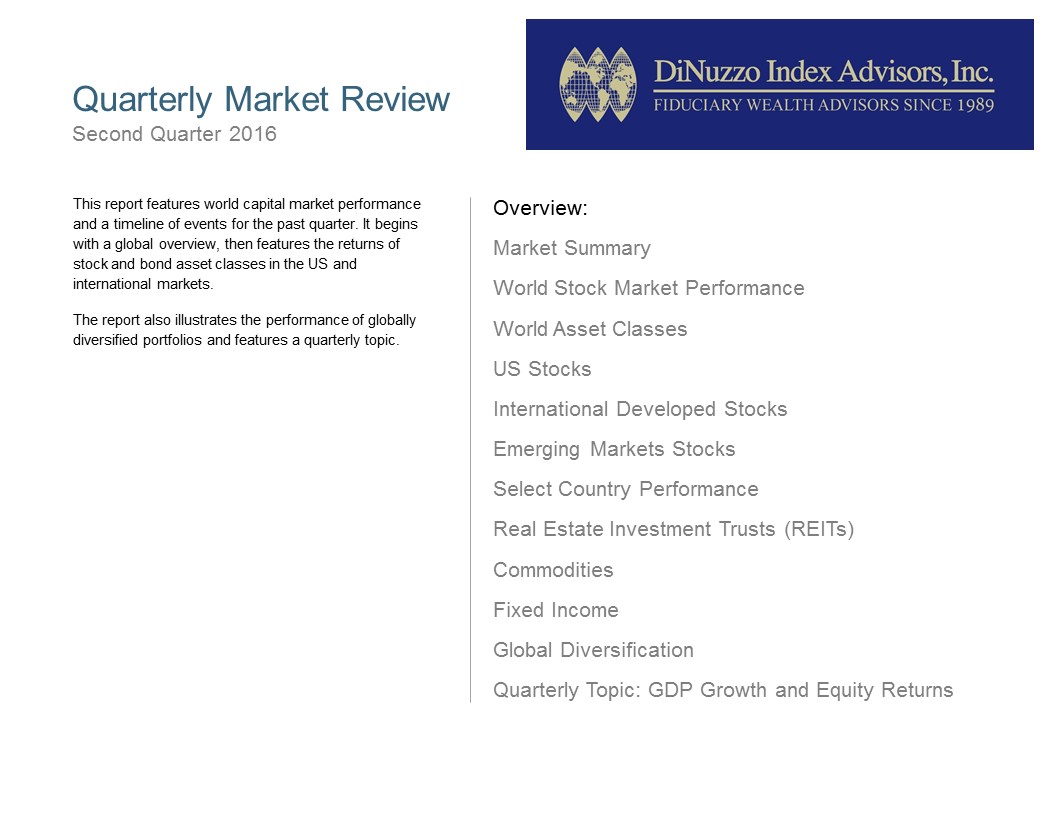 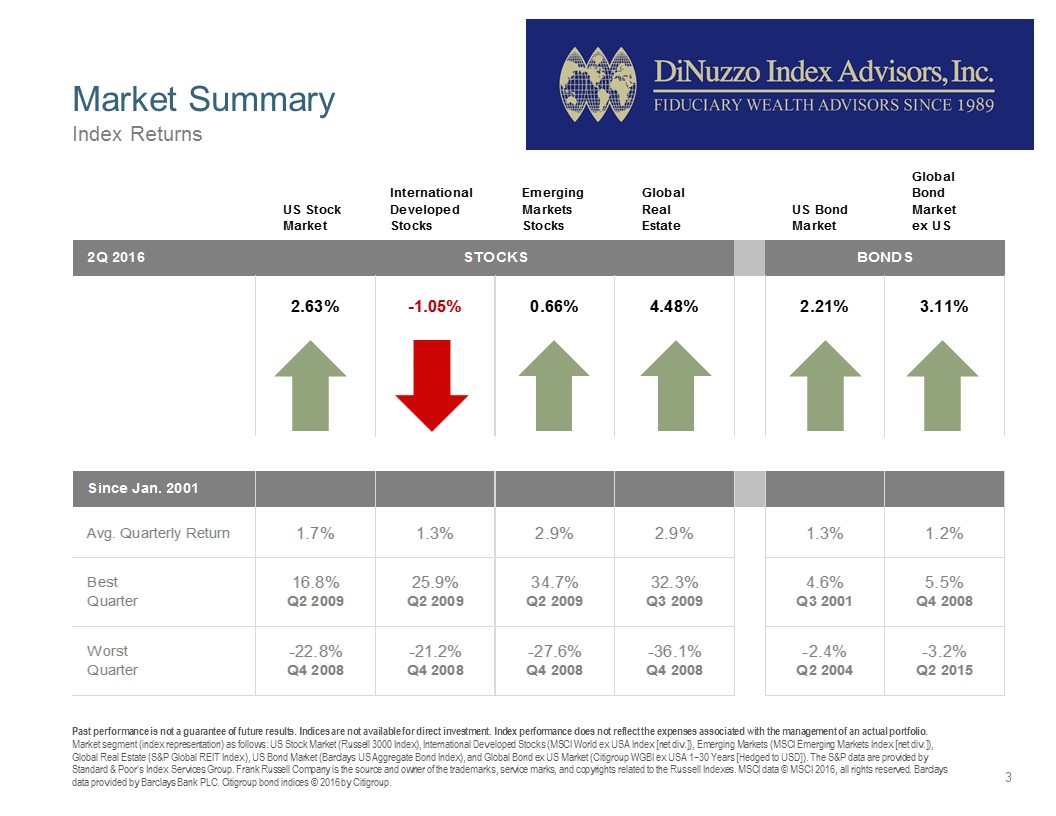 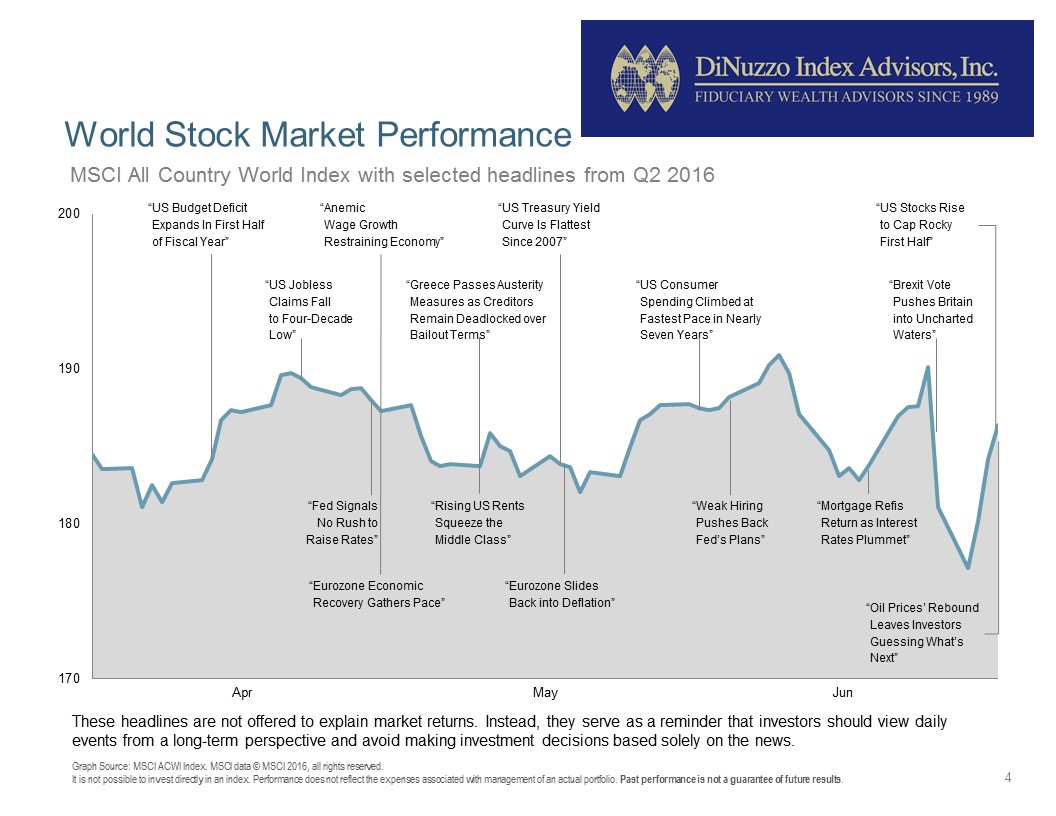 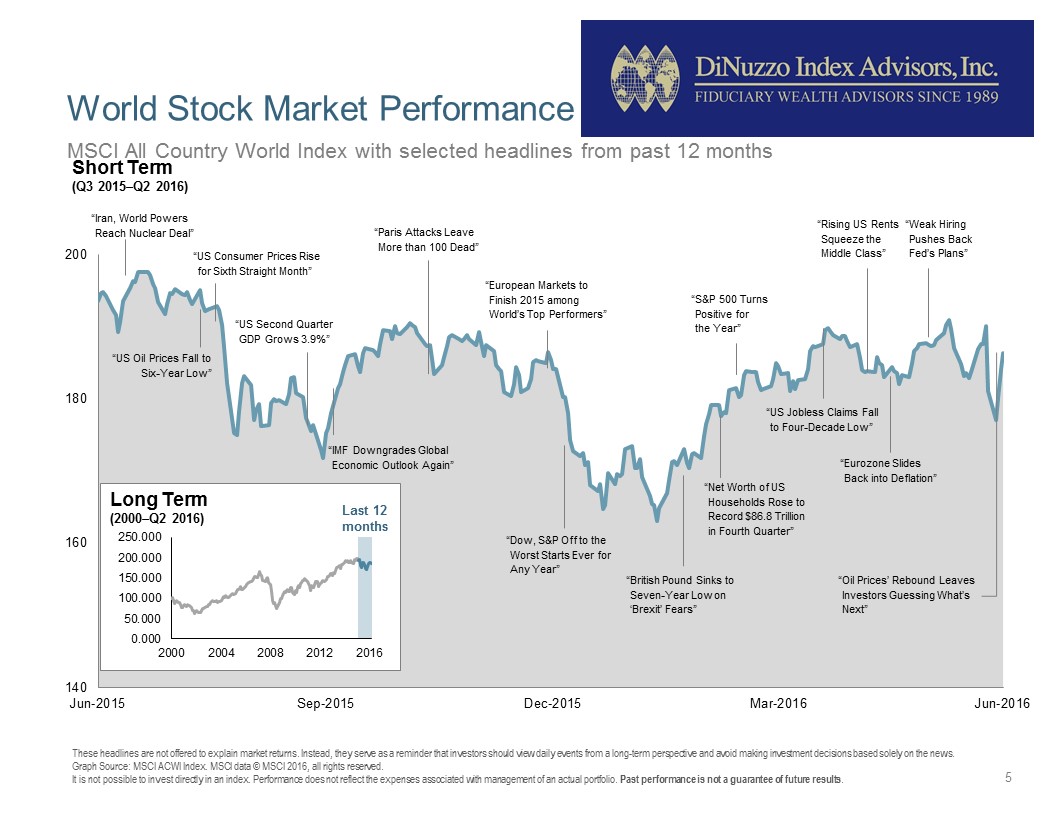 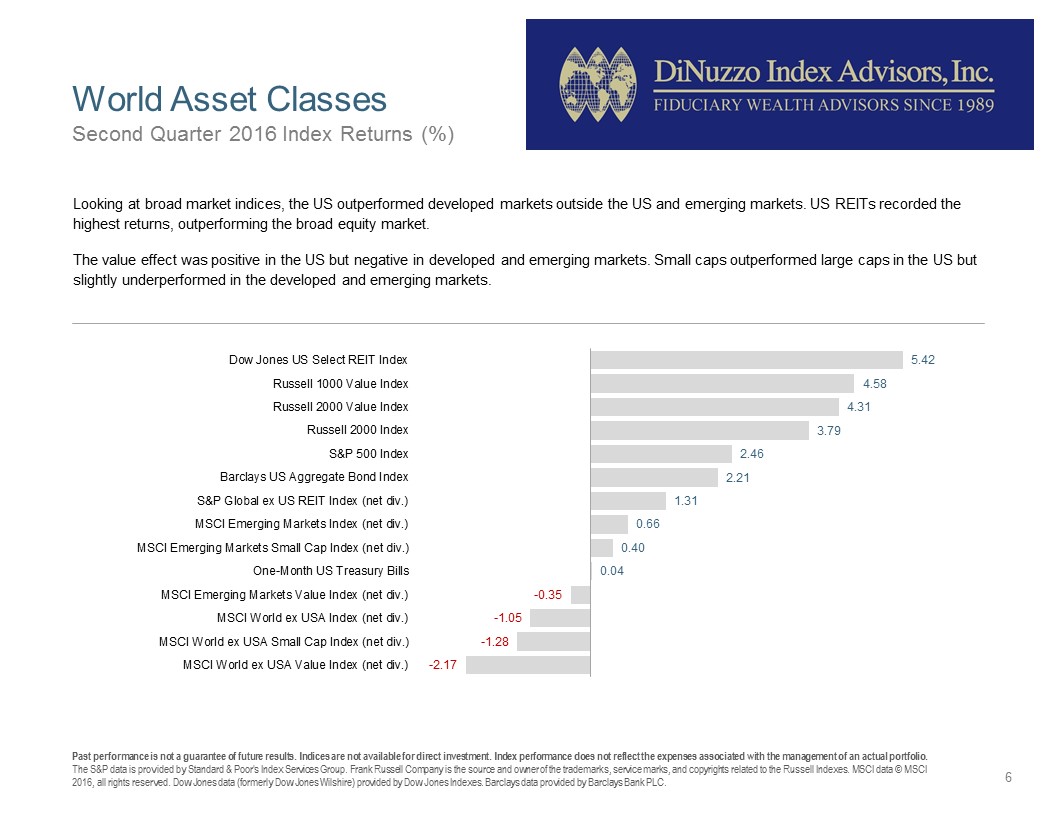 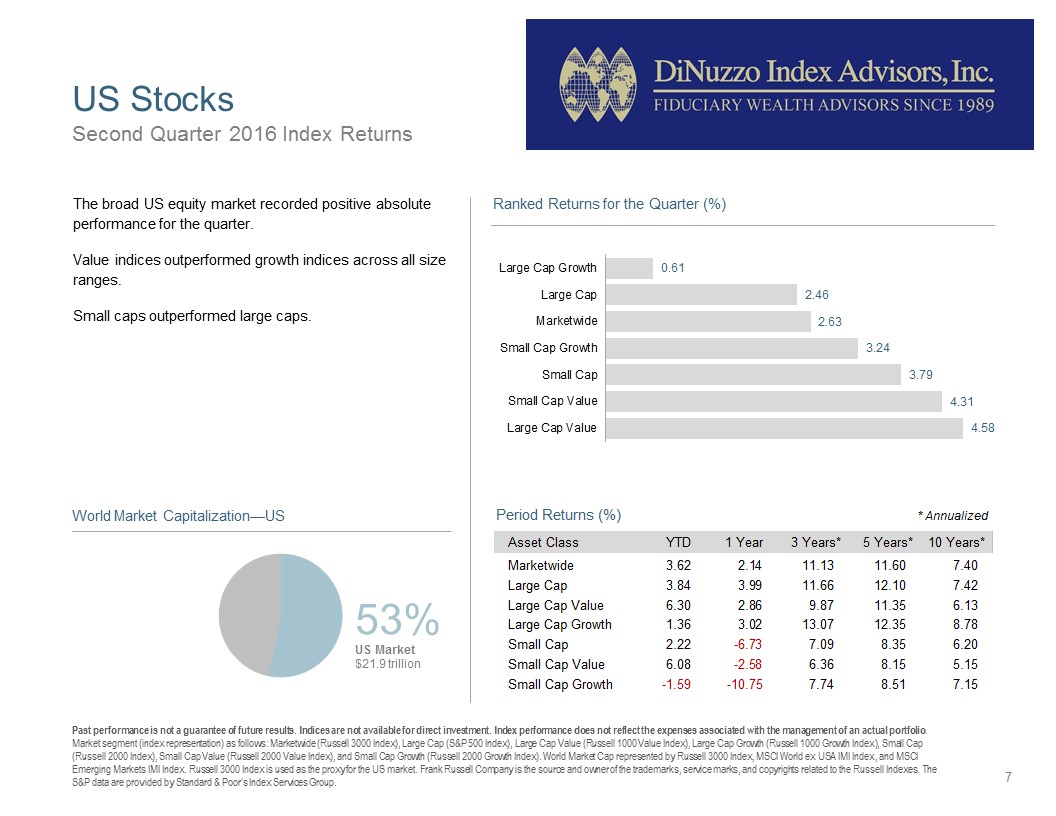 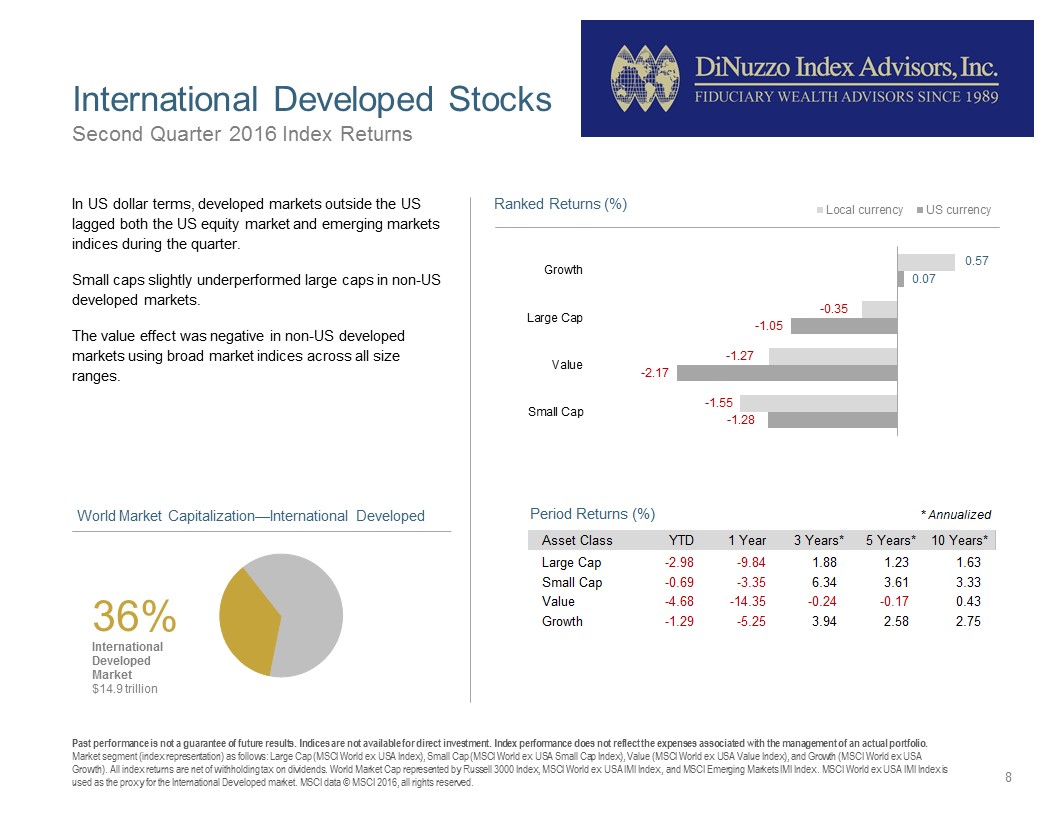 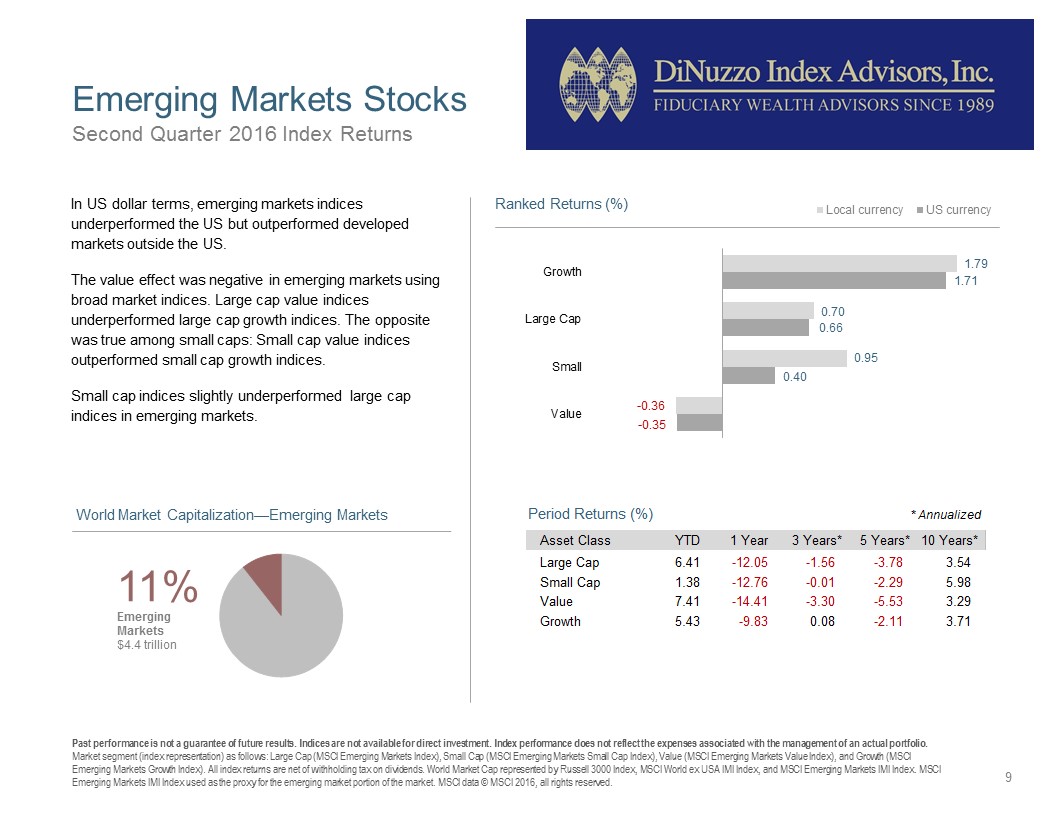 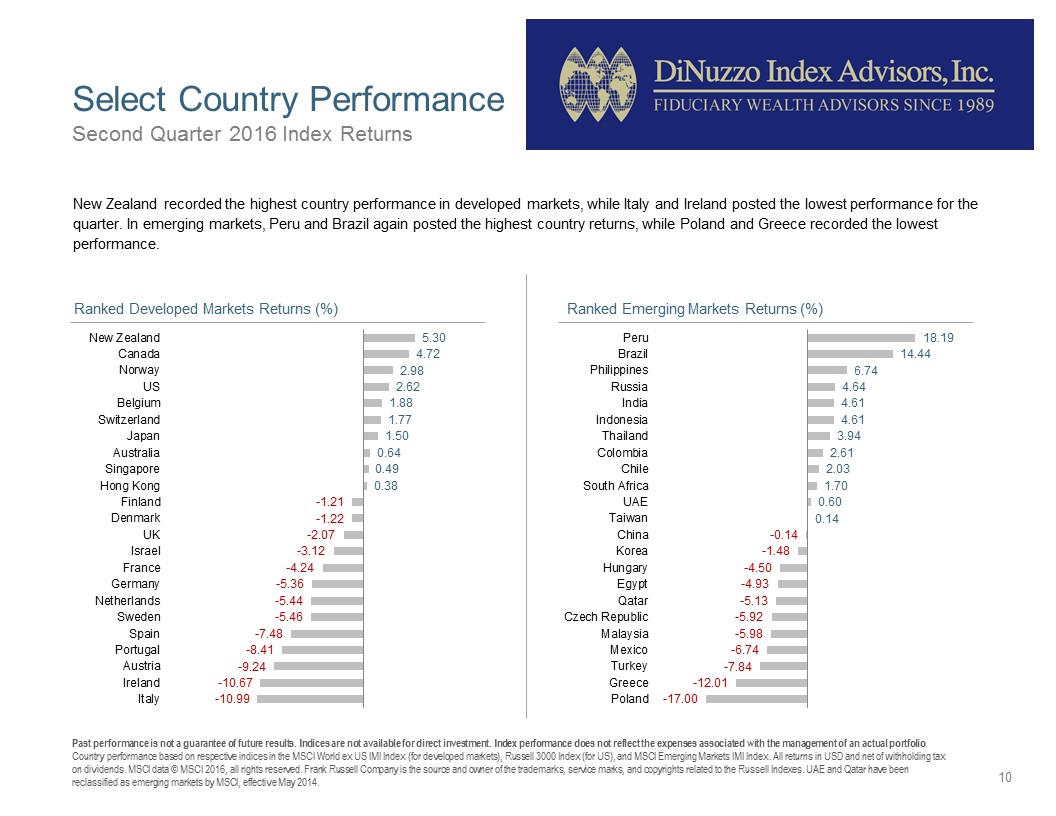 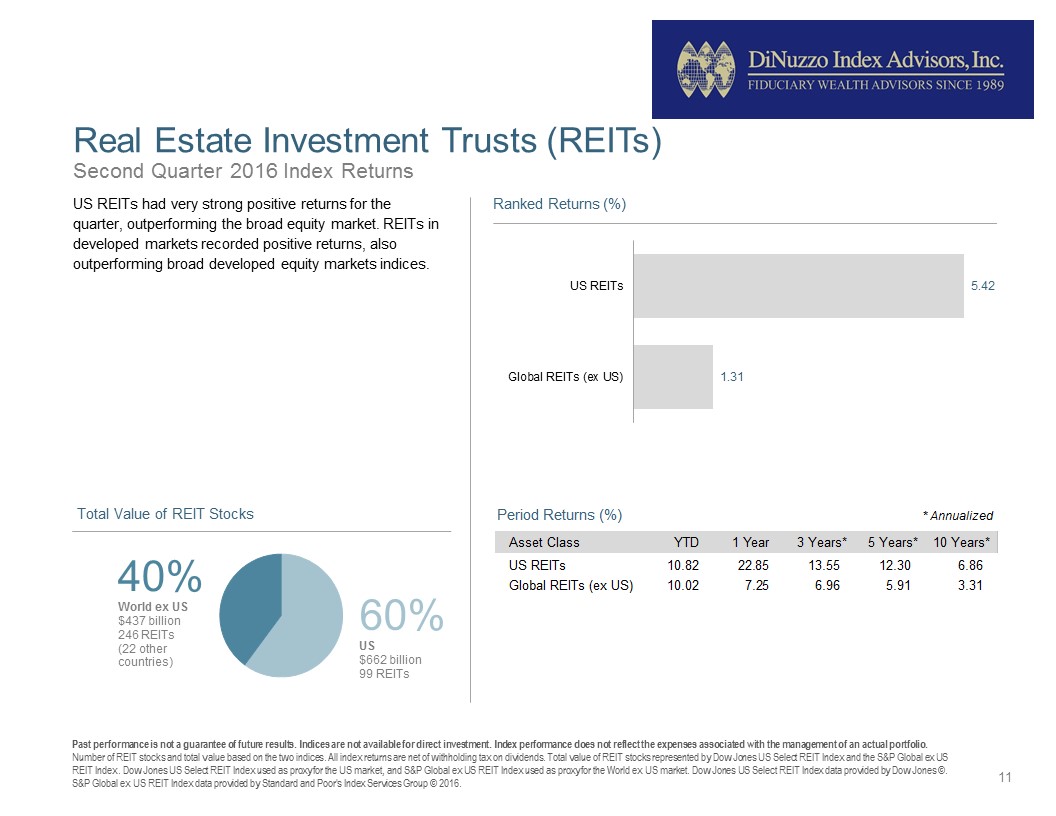 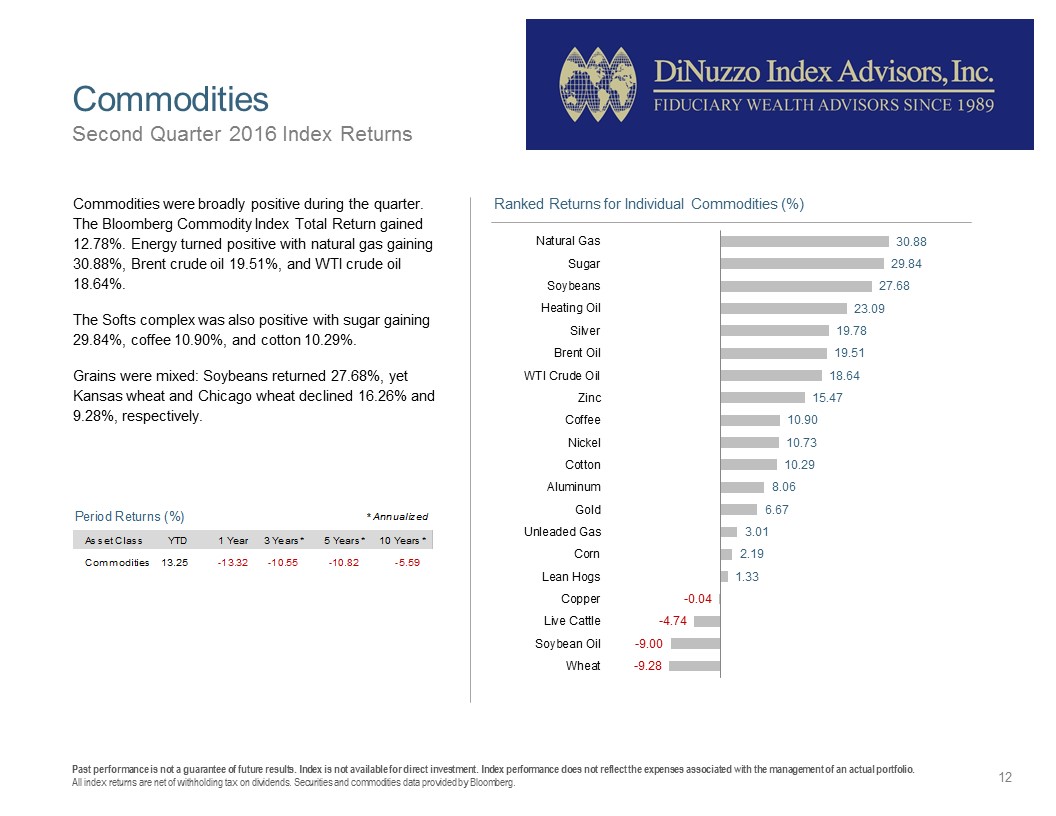 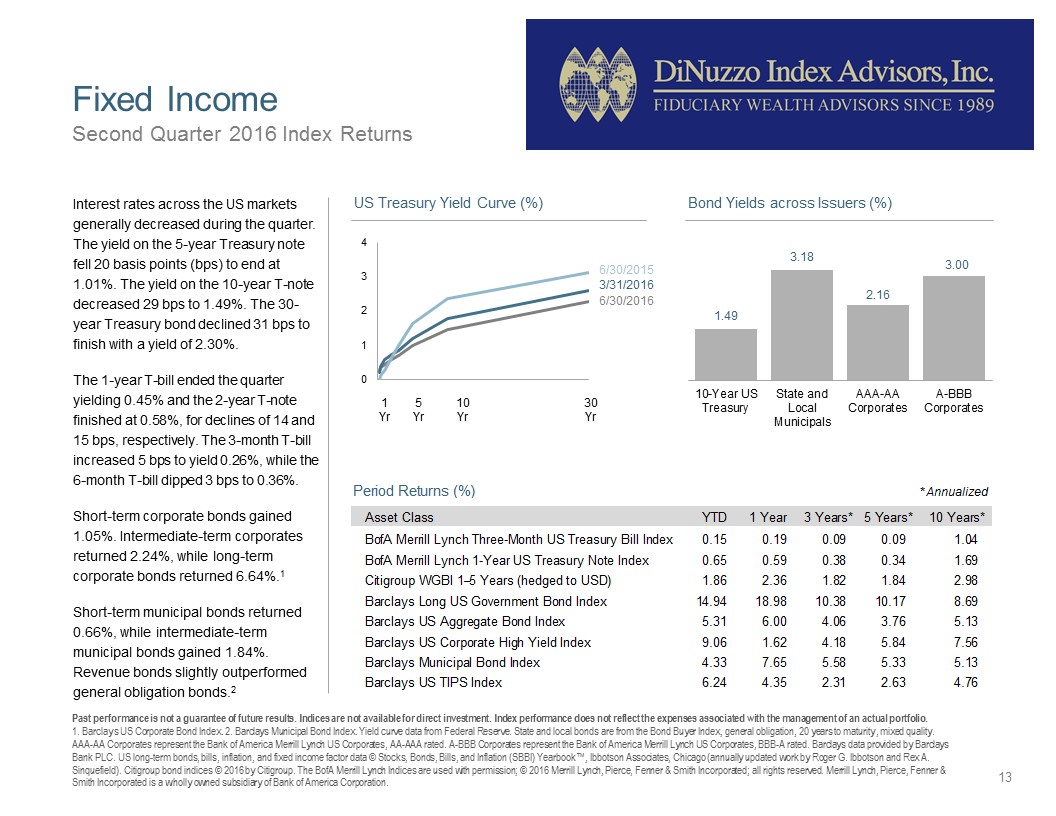 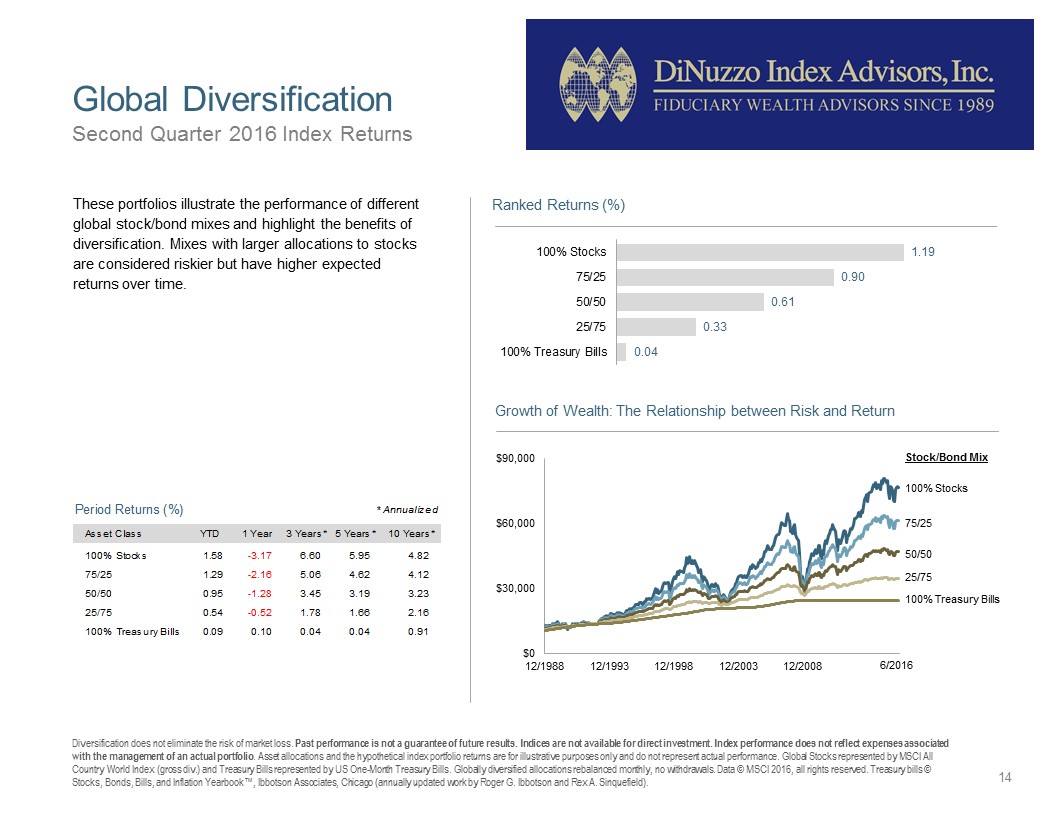