You don't hear much about America's personal savings rate these days, and the reason may be because the news is discouraging: collectively, the percentage of our income that we save is trending downward again, and may be about to hit record lows.  The Federal Reserve Bank of St. Louis tracks the U.S. personal savings rate, going back to the late 1950s, when  people were setting aside a thrifty 11% of what they made.  Americans achieved a record 17% savings rate in the mid-1970s (see chart) before a long decline set in.  In 2013, the rate briefly spiked again above 10%, but as you can see from the chart, Americans have become less thrifty since then.  The most recent data point shows Americans saving just 3.6% of their income.

How does this compare to the rest of the world?  A chart on the Trading Economics website shows that most countries fall in the 4.5% to 10% range, but with considerable fluctuation.  For instance, Spain experienced a negative savings rate just last quarter, but this quarter reports a rate of more than 14%.  Japan and Mexico seem to be consistently the thriftiest of the reporting nations, each with savings rates above 20%.  (India's rate on the chart appears to be in error.) 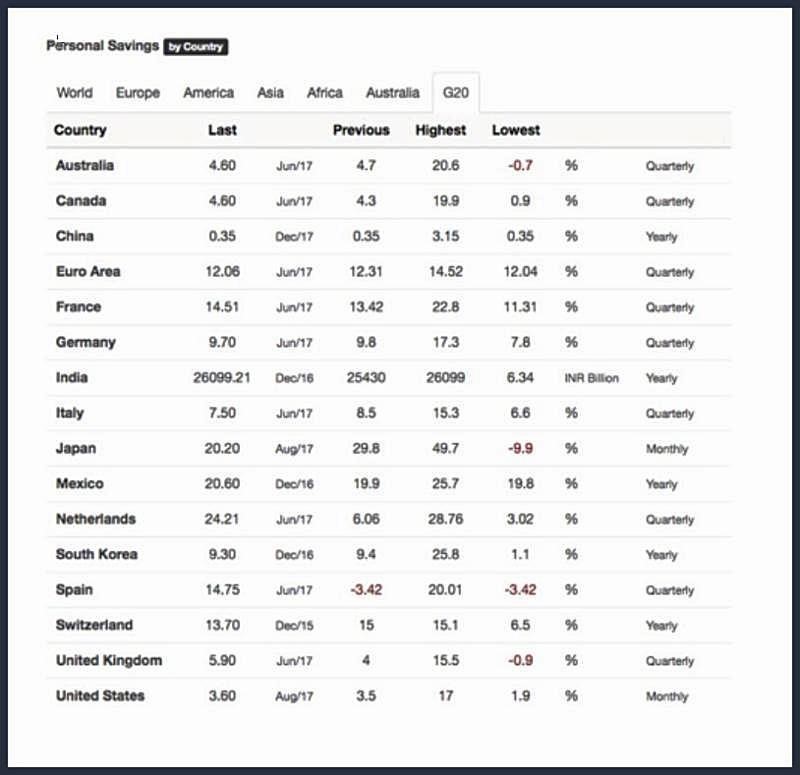 Does any of this matter?  Economists will tell you that when the savings rate is high, it cuts into consumption, which lowers economic activity.  But at the same time, countries with high savings rates have more capital to invest in their future, and their citizens tend to be less vulnerable to economic downturns.  On the whole, we should probably prefer more savings to less.