You might have read that the U.S. investment markets are jittery on the news that Japan has experienced two consecutive

quarters of economic decline—the official definition of a recession.  But if you turn the news around, it offers us a reminder that, however much we complain about slow-growth recovery from 2008, Americans are actually part of one of the most robust economies in the world.

The statistics tell an interesting story.  The U.S. economy is growing at a rate of about 2.95% for the year, which is (as the complainers correctly point out) slightly below its long-term pace.  But this doesn’t look so bad compared to the 2.16% average growth average for the G7 nations in aggregate, and our growth numbers are well ahead of the European Union, whose economies are expanding at an anemic 1.28% rate this year.

Look deeper and our story looks even better.  The current recession is Japan’s fourth in six years, despite long-term stimulus efforts that make the Fed’s QE program look like a purchase at the candy store.  Europe is rumored to be teetering on the edge of recession, which would be its second since the 2008 meltdown.  The published GDP figures coming out of China (which are very unreliable due to heavy government editing) could drop to about half the long-term rate this year, and Brazil entered recession territory last Summer.

But what about the 5.8% unemployment rate?  That’s better than the 10% rate at the end of 2008, but it’s not good—right?  Compared with the rest of the world, America’s jobs picture looks downright rosy.  The list, below, shows that only 13 countries have lower jobless rates than the American economy, and some of those (Malaysia, Russia, Saudi Arabia) may be giving out numbers that their leaders want to hear.  Yes, it would be nice if the long, sustained GDP growth we’ve enjoyed these last six years were faster, and we all hope that the unemployment rate continues dropping.  But compared with just about everywhere else, life in the U.S.—on the economic front, at least—is pretty good 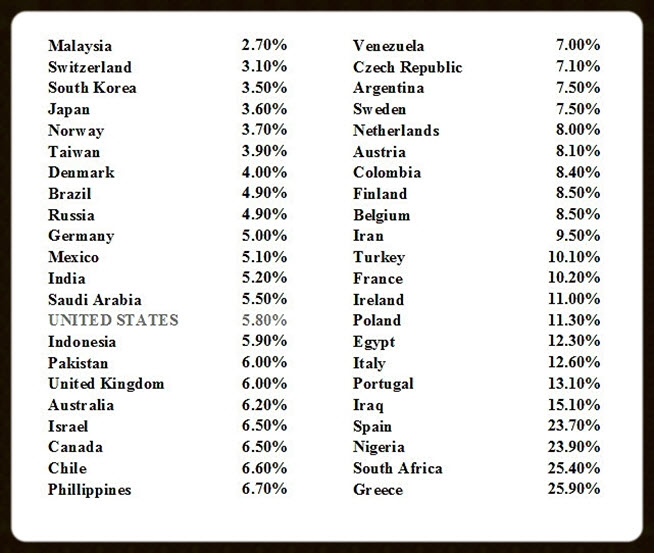