Investors may be tempted to extrapolate recent returns into the future, which can lead them to abandon their investment philosophy at potentially inopportune times. While negative outcomes are disappointing, investors should view them with the proper perspective and stay the course.

When you leave your server a tip, do you round it to a whole-dollar amount and often in multiples of $5?  Does a 60th birthday seem more significant than a 59th?  If you answer yes to these questions, you're not alone.  Most of us prefer round numbers.

This preference leads many investors to review results by calendar year and to consider 10-year periods when evaluating long-term returns. People tend to place greater emphasis on the latest period due to recency bias and to extrapolate recent results into the future.  For these reasons, we should put recent performance into the proper perspective.

During the most recent 10 years, equity investors have generally fared well, with the MSCI All Country World Index (IMI) earning an annualized return of 10.32% through 2018. Within equities, small cap stocks and higher profitability stocks have generally delivered outperformance relative to the market, but the underperformance of value stocks has garnered a lot of attention. Value investors may feel somewhat disappointed, as the MSCI All Country World Value Index (IMI) underperformed the market, delivering an annualized 9.23% over the same period.

We expect positive market, size, value, and profitability premiums1 but also recognize that realized premiums are volatile and can sometimes be negative. Although a negative premium can be disappointing, it is not unprecedented-and we can look at historical data to gauge how often each premium has been negative.  For example, Exhibit 1 shows the frequency of experiencing a negative premium in the US over rolling 1-, 5-, and 10-year periods as far back as the data are available. As you can see, negative premiums occur from time to time. 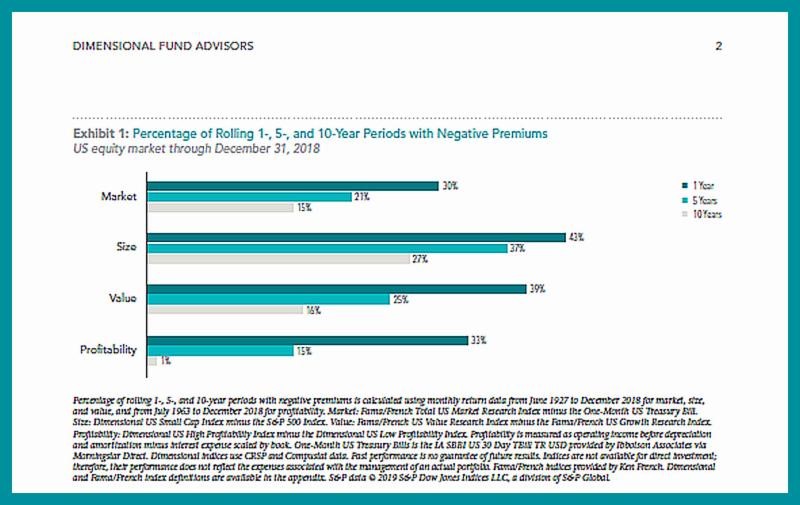 While the odds of realizing a positive premium are never guaranteed, they are decidedly in your favor and increase the longer you stay invested.

This analysis looks at each premium individually. What if you integrate all four premiums in pursuit of higher expected returns? A different approach is to calculate the frequency that one, two, three, or all four of the premiums were negative over rolling 10-year periods from July 1963 to December 2018. As shown in Exhibit 2, periods when one of the four premiums was negative-like the most recent decade-occurred in almost half of the rolling 10-year periods. However, the premiums do not move in lockstep, so there were relatively few instances of two negative premiums and virtually no instances of three or four negative premiums.

In all likelihood, any premium that doesn't materialize will get called into question. Plenty of ink will be spilled over scrutinizing the one that had the bad draw, even if that's all it was. The US value premium has been under the microscope lately, but the other premiums have had their turn historically.

From an empirical perspective, a negative 10-year premium is not so far outside the range of outcomes to suggest that the premium no longer exists. More importantly, we have a sensible framework for expecting positive size, value, and profitability premiums. That framework is valuation theory, which posits that a stock's price reflects the company's expected future cash flows discounted to present value. The discount rate equals an investor's expected return. Therefore, as long as stocks have different expected returns, those with lower prices and higher expected cash flows should have higher expected returns. This framework holds regardless of whether realized premiums have been positive or negative in the recent past.

Exhibit 3 confirms that premiums have, on average, been positive after periods of underperformance, although the data show a wide range of outcomes.  In this analysis, we identify the rolling 10-year periods when a premium was negative and then observe how the premium behaved over the following 10 years.  Profitability is excluded because there are only two data points.

Despite compelling theoretical and empirical evidence supporting the premiums, investors may be tempted to extrapolate the recent past into the distant future, which can lead them to abandon their investment philosophy at potentially inopportune times. Maintaining discipline and sticking to the plan are vital. The performance of premiums in the recent past doesn't tell you much about future premiums. So, if your goals haven't changed, then your asset allocation likely doesn't need to change.

Furthermore, premiums can materialize quickly, and you want to be properly positioned to capture the returns when they show up. The period leading up to and shortly after the start of the 21st century provides an extreme, albeit anecdotal, example. Exhibit 4 shows the performance of the Russell 1000 Growth and Value indices. Growth beat value over every trailing period from 1 to 20 years ending March 31, 2000. Consequently, many investors found themselves questioning a value strategy, meaning they wondered if expected returns were still related to the price paid for a stock in the so-called "new economy." 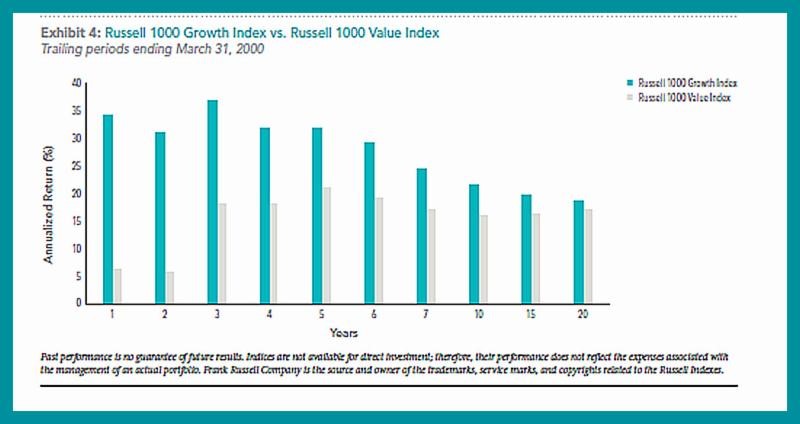 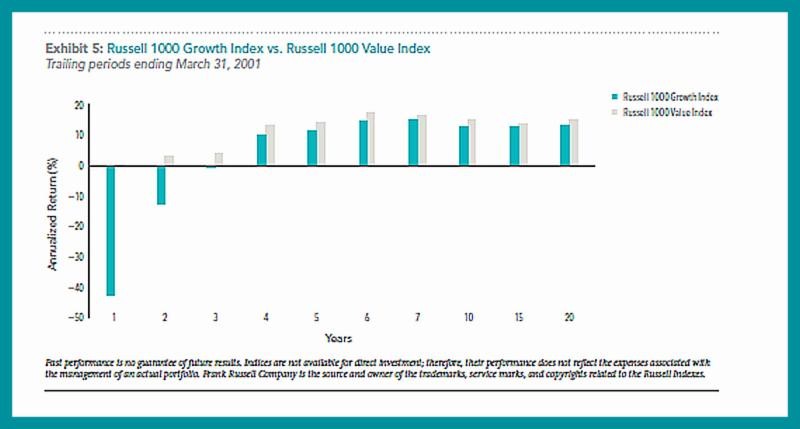 Investors who capitulated to this line of reasoning may have regretted their decision a mere 12 months later because the value index strongly outperformed the growth index, as illustrated in Exhibit 5, over every trailing period from 1 to 20 years, ending March 31, 2001. The moral of the story? Negative outcomes are disappointing, but investors should view them with the proper perspective and stay the course!