The Optimistic Data You Never See

The Optimistic Data You Never See

If you want to feel depressed about the economy and the outlook for the investment markets, there are always pundits and media

outlets to oblige you.  I'm sure you're still seeing sober forecasts that the world is running out of oil and food, the U.S. economy was still mired in a painful hangover from the recession that manufacturing jobs are fleeing America in droves and the federal government is on a fast track to a Greece-like fiscal bankruptcy.

What sane person would invest in a world that is rapidly going to hell in a hand basket?

Before you buy your gun and cabin in the woods, you might consider some of the facts and figures that we aren't hearing about from the doomsayers.

Let's start with oil--specifically, the oft-quoted prediction that the world has experienced "peak oil," that we are using up our oil reserves, which will trigger a collapse of the global energy economy.  Google "peak oil" and you can still read the doom saying reports.  But according to Wikipedia's latest entries, the OPEC countries actually have dramatically MORE reserves today than they did in 1980, and the numbers have been going up year-by-year.  In 1980, Saudi Arabia reported 168 billion barrels of reserves, and the assumption was that most of its oil had been found and would be used up within 20 years.  After 30 years of pumping oil and selling it to the world, Saudi Arabia is now estimated to have more than 264 billion barrels of oil in the ground.  In 1980, Kuwait had an estimated 68 billion barrels of reserves.  After thirty years of diligently pumping oil out of the ground, the country now has an estimated 101.5 billion barrels in the ground.  Iraq's reserves have grown from 30 billion to 143 billion, the biggest jump of any OPEC nation except Venezuela, which had 19.5 billion barrels of proven reserves in the ground in 1980, and now is estimated to have more than 296 billion. 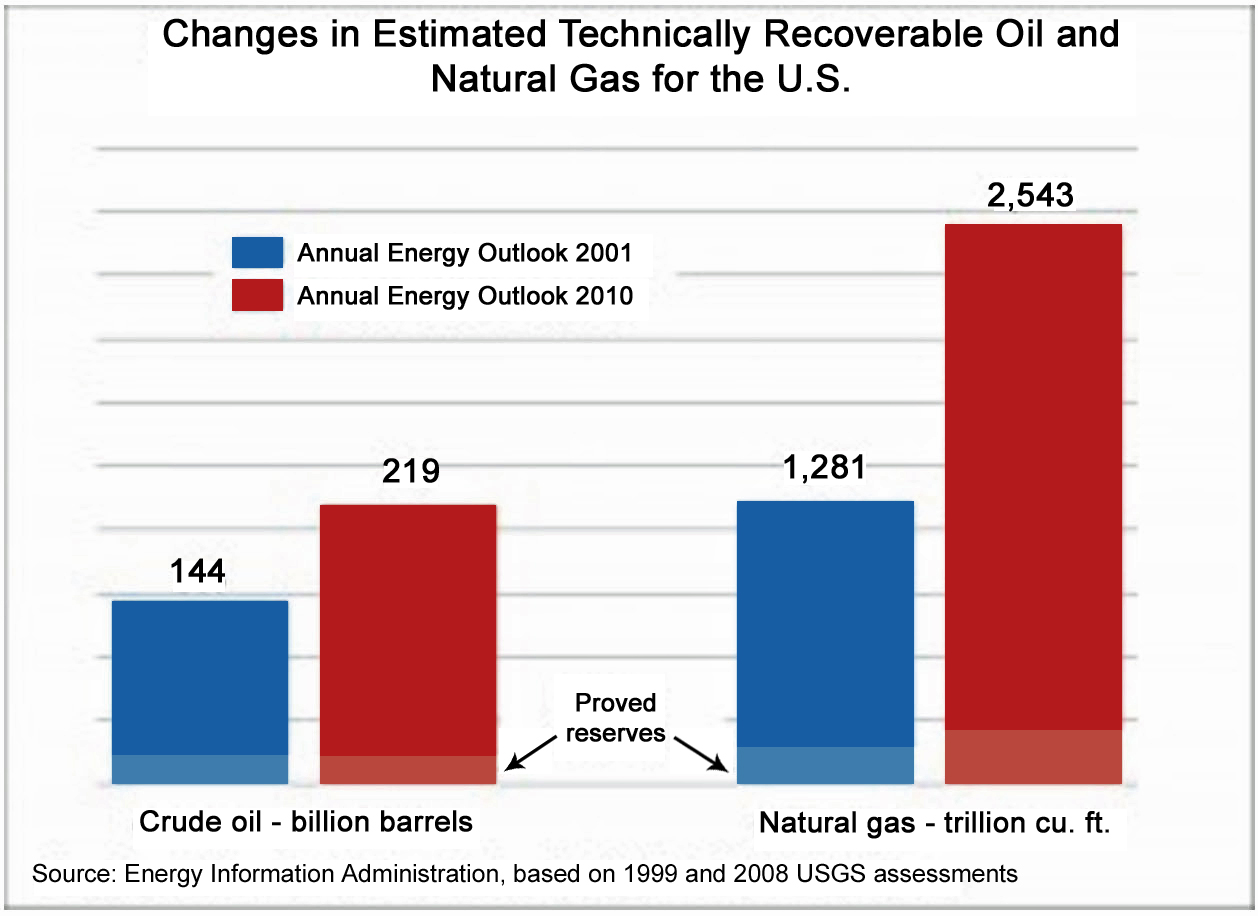 But the biggest oil and gas story in the world, by far, is the U.S.  In the ten years between 2001 and 2010, recoverable crude oil in the ground has risen from 144 billion barrels in the U.S. to 219 billion, and recoverable natural gas has risen from 1.28 trillion cubic feet to 2.54 trillion.

This impacts the economy in several ways.  First, it provides American manufacturers and consumers with a steady supply of reliable, cheap energy.  Second, it reduces imports of foreign oil, helping our economy balance its trade deficit.  In fact, the U.S. has become one of the world's largest exporters of natural gas.

This leads to another gloom and doom issue: the alleged decline of America's manufacturing industry.  One of the untold stories is that the combination of wage increases in China and elsewhere, plus the availability of cheap energy, has made it more attractive for American companies to bring their manufacturing plants back home--and for foreign-based companies to relocate their plants here, convenient to a huge market for the things they manufacture.  Economists have even coined a new term for this trend.  They call it "reshoring."

Some recent examples: General Electric moved the manufacturing of washing machines, refrigerators and heaters from a China factory to a Kentucky factory that had been rumored to be on the verge of closing.  Apple has recently moved the production of its existing Macintosh lines from China to the U.S.

According to the Boston Consulting Group, December 2013 marked the 53rd consecutive month of expansion for U.S. manufacturers--a statistic you will never see in the newspapers.  To find out what was going on, the organization surveyed decision makers at larger companies, and found that 48% were either strongly considering relocating manufacturing jobs back to the U.S or had actually done it.

So why is the U.S. still mired in a recessionary economy?  Because it isn't.  If you were to look at a graph of the monthly percent changes in the American gross domestic product, you would see frightening declines in 2008 and 2009--a drop of 8.3% in the fourth quarter of 2008 alone, when (as you may remember) Wall Street nearly wrecked the global economy.  From 2010 forward, however, growth has been steady quarter over quarter, with only a brief decline in 2011.  Last year's growth rate was positive even though the two-week government shutdown cost the economy some $55 billion in lost productivity.

But what does all this matter if the government is on the fast track to bankruptcy?

This may be the most underreported story of all.  According to the Congressional Budget Office, our nation's federal deficit shrank 37% in 2013, in part because revenues are up as the economy expands, in part because of the drawdown of U.S. military involvement in Afghanistan, in part because of the automatic spending cuts known as the sequester.  Total U.S. government revenue exceeded spending by $53.2 billion last December, compared with a $1.19 trillion deficit in December 2012.  In the past two fiscal years, government outlays have dropped from 22% of GDP to 20.8%, and some respected economists are now actually expressing concerns that the deficit is falling too quickly.

If you add all these trends up, our total economic picture is not nearly as gloomy as most people seem to believe.  That doesn't, of course, mean that there are no challenges ahead; there are always challenges ahead.  It doesn't mean that investments are going to go up; the short-term swings of the investment markets are largely determined by emotions, and few investors have access to the information that you have just read.

But the positive trends might give us hope that, despite all the negative reporting and self-serving forecasts of doom, the American economy is actually moving forward with some confidence.