We hear all the time that medical costs are too high in the U.S., and that Medicare is going to go bankrupt in the future.

The President-Elect recently told us in a press conference that drug companies are "getting away with murder."  So how high are drug prices, and are those prices contributing at all to the high medical costs in the U.S.?

A Public Citizen Research report looked at the prices that older citizens pay for their medications under the Medicare Part D plan, the largest federal drug program, which now covers more than 39 million people.  You might be surprised to know that when the plan was passed by Congress under the Bush Administration, Medicare was specifically not allowed to "interfere" with the negotiations between drug manufacturers and pharmacies.  The program was prohibited from leveraging its purchasing power to create economies of scale.  And that would have been plenty of scale; currently, Medicare recipients account for 28% of all medical drug purchases in the U.S. marketplace.

But surely the marketplace itself would have resulted in reasonable drug costs.  Right?  The researchers compared the total expenditure per capita on pharmaceuticals across 33 large nations around the world, and found that not only did the U.S. spend the most-just over $1,000 a year per U.S. consumer, but the U.S. was a huge outlier over the rest of the world.  Canada, whose socialized medical system is widely derided in political debates, came in second, at $750 per capita, and Belgium, Japan, Germany, Ireland, France and Greece are all near or above $600.  At the other end of the scale, countries like Chile ($200), Israel ($300) and Denmark ($300) have managed to control drug costs without sabotaging the quality of their citizens' health care. 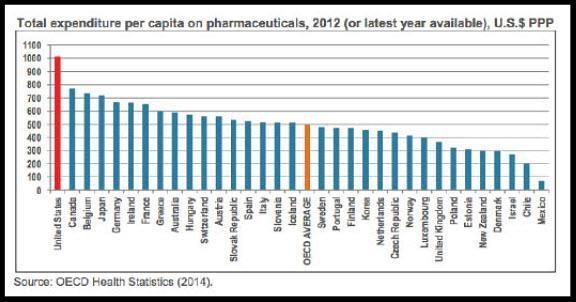 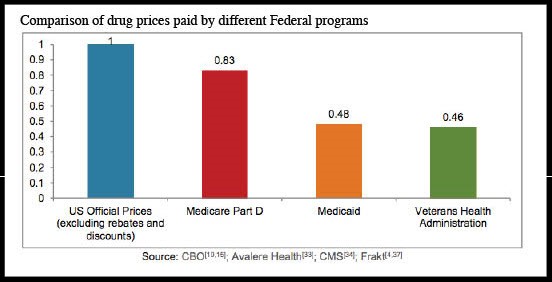 A separate analysis in the same paper found that Americans pay much higher prices for patented drugs than any country in the world-by a nearly 2:1 ratio.  In fact, Medicare Part D pays nearly twice as much for the same medications as the Veterans Health Administration (VHA), due to the VHA's ability to negotiate prices with its own purchasing power.