Every year since 1975, the Social Security Administration has automatically adjusted its benefit payments upward to account for inflation; the goal is for the payments to keep pace with the cost of living that recipients are experiencing. For the past decade, these inflation adjustments have been pretty modest, as you can see in the chart. In 2009, 2010 and 2015, there was no increase, and many of the other raises were 2% or less.

That could change in the coming year, as a result of higher inflation. In June, the Consumer Price Index rose 5.4% from a year earlier—the largest gain since 2008. Extrapolating from the first six months of inflation data, the Senior Citizens League has estimated that the Social Security cost-of-living adjustment for 2022 would be at or about 6.1%—which would be the largest one-year increase since the bad old high-inflation days of 1983.

Social Security increases are tied to the CPI-W, the Consumer Price Index for Urban Wage Earners and Clerical Workers. Some economists believe that the CPI-W tends to undercount the cost of living increases that many people experience, and that is especially true for seniors, whose budget is more closely tied to housing and health care costs, and less to food, apparel, transportation and recreation.

A new bill in Congress, the Fair COLA for Seniors Act of 2021, proposes to change Social Security’s measure of inflation from CPI-W to CPI-E, the Consumer Price Index for the Elderly, which the Bureau of Labor Statistics has been calculating since 1985. This shift, endorsed by the Biden Administration, would have resulted in a 1.4% upward adjustment last year (vs. the 1.3% figure used by the Social Security Administration), a 1.9% increase in 2020 (vs. 1.6%), 2.8% in 2019 (vs. 2.6%), 2.1% in 2018 (vs. 2.0%), and a much bigger increase in 2017, from 0.3% up to 1.5%. Comparing the two measures of inflation over time, economists estimate that over 25 years, the CPI-E cost adjustments would push benefits 5% higher than the existing CPI-W index increase calculation that we use today.

The Social Security Administration has published a lengthy analysis of the differences in the various inflation measures, and its analysis suggests that, even though healthcare costs are weighted more heavily in the elderly CPI statistics, the prices actually paid by the elderly for health care, medications and hospital costs may be different from the general population calculations of inflation that are embedded in CPI-E. Also, as the homes owned by the elderly increase in value, their out-of-pocket payments for property taxes and insurance premiums may be more volatile than they are for their younger peers. Beyond all that, every one of us is different, with different lifestyles, so our individual CPI—whatever index is used—is likely to be different from whatever number is published month to month, year to year. 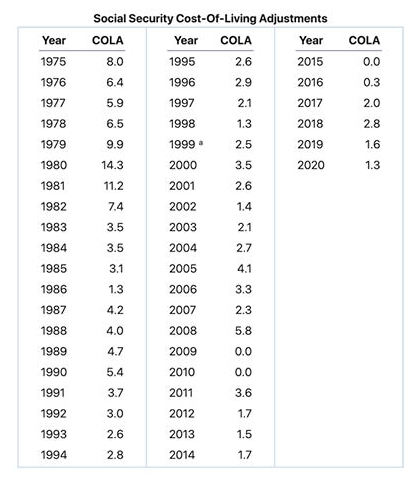