You probably know that the U.S. President makes $400,000 a year in salary.  But do you know how that stacks

up with elected leaders in the rest of the world?

The chart shows that one leader outpaces everybody, however.  Former Singapore Prime Minister lee Hsien Loong earns more than the combined annual wage of the leaders of France, Germany, Italy, Japan and the United Kingdom combined. 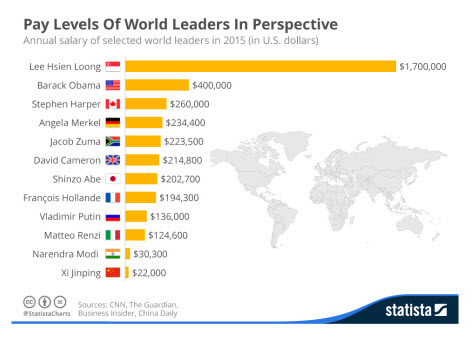 But to put all of this into perspective, the average Wall Street salary came to $356,000 last year, plus bonuses averaging $175,000.  Morgan Stanley’s top executive, James Gorman, took home $22.5 million.