Another Tariff, Another Downturn

Another Tariff, Another Downturn

Last weeks, stocks went on sale again, but there didn't seem to be a lot of bargain hunters stepping in to take advantage.  The S&P 500 dropped 5.9% over five days, its worst week since January 2016. 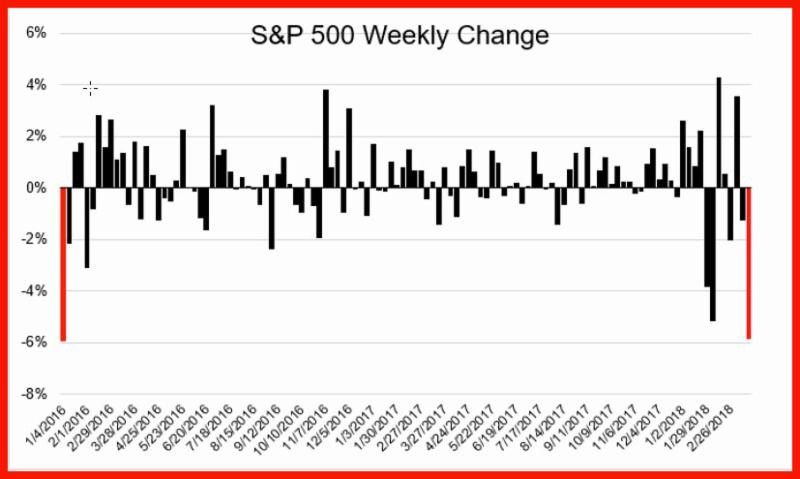 This follows a by-now-familiar pattern: the Trump Administration announces tariffs-this time on Chinese imports with an estimated value of $60 billion a year-but is not specific on the details.  Traders fear that there will be retaliation against American products sold abroad, and put a lower value on the large multinational companies that account for most exports and make up most of the major indexes.

The last time this happened, the tariffs involved steel and aluminum, and the panicked sellers  later discovered that the impact on global trade was actually quite small, due to negotiated exemptions for major steel producing nations like Canada and South Korea-plus the Eurozone and Mexico.  This time around, the U.S. trade representative has 15 days to develop a list of specific Chinese products to slap the additional taxes onto, and there will be a public comment period before the threatened tariffs go into effect.  China has announced that it is developing its own list, and as companies (and farmers) become aware of what is included in its reported $3 billion tariff package, they will lobby for exemptions which may turn this announcement into another tempest in a teapot.

Meanwhile, in the wake of the Cambridge Analytica scandal, admissions that private information on 50 million people had been pilfered, and up to 126 million Americans had seen posts by a Russian troll farm on its site, Facebook shares fell almost 10%, from 176.83 down to 159.39.  This took the social media giant down from the 5th largest-capitalization company in the S&P 500 index to the 6th (behind Berkshire Hathaway)-dragging the index down even further.

What's remarkable about the selloff over things that might or might not happen is that it came amid some very good news about the U.S. economy.  Durable-goods orders jumped 3.1% in February, sales of newly-constructed homes were solid, and Atlanta Fed president Raphael Bostic announced that there were "upside risks" in GDP and employment.  Translated, that means that the economy is looking too good to keep interest rates as lows they have been-which means this is a curious time to be selling out and heading for the investment sidelines.