What is the Jobs Report Telling Us?

What is the Jobs Report Telling Us?

You've probably heard that the Bureau of Labor Statistics (BLS) Employment Report for the month of May was disappointing.  Economists who follow job growth in the U.S. economy were expecting 123,000 new jobs to be created.  The actual number, according to the BLS, was 38,000-the smallest gain since September of 2010. 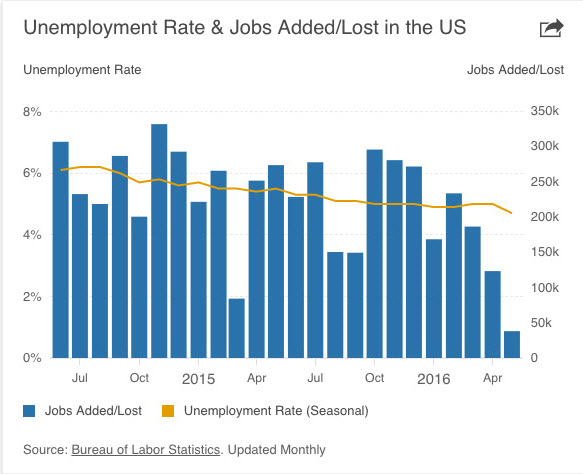 What's going on?  On a scale of 1 to Lehman, how worried should we be?  Is an 85,000 shortfall in job growth, in a single month, telling us that the U.S. economy is about to plunge into a deep recession?

As it turns out, the investment markets largely shrugged off the surprising number-for a variety of reasons.  First of all, a strike affecting 35,000 Verizon employees was somehow factored into the data, so unless all the striking workers are never coming back to work, a real count would have put the job-adding number at around 73,000. Second, the employment data comes with a huge asterisk: these are estimates with a margin of error of 100,000 jobs.  That means we won't actually know how many jobs were created until sometime in the future.

Third: despite the low job creation figure, the Bureau of Labor Statistics also told us that the unemployment rate is dropping, currently to 4.7%, the lowest rate since November 2007.  How can that be?  BLS statistics say that people are leaving the workforce at a faster rate than previously, but the economy has also been adding 180,000 to 200,000 jobs almost every month for the past five years.  Is it possible that it has finally given a job to most of the people who want one?

As evidence, the BLS has reported that hourly earnings by workers are up 3.2% for the first five months of 2016, which suggests that workers have a bit more pricing power than they did, say, last year.  That suggests that we are experiencing a tighter labor market, not one where jobs are falling off the table and many people are too discouraged to apply for a job.

Finally, the uncertainty over jobs has almost certainly delayed the rise in interest rates that had, before the report, been widely expected from the U.S. Federal Reserve Board in June or July.  You can expect the Fed to be more cautious about adding any costs to the economy until its economists can get a handle on what that odd job statistic means for the overall health of U.S. businesses.  That would give the economy a slight boost, and might lead to higher jobs growth figures in the future.