People living in New Jersey, New York city and surrounding areas are digging out from under the worst storm ever to hit the U.S. north

of the Carolinas.  The rest of the country has been looking at terrible pictures of the flooding and property damage caused by Hurricane Sandy, and continuing power outages for more than 8 million homes are still disrupting the recovery.  New York City and northern New Jersey have been all-but closed off by car, train and air, and the city's waterfront and financial district are dealing with the aftermath of flooding.

As the news continues, investors might be forgiven if they ask the obvious question: How will Hurricane Sandy impact the U.S. economy?  Did the storm destroy the recent GDP growth momentum?

A recent article in The Atlantic notes that, since we've been keeping records (in other words, since around 1950), the U.S. economy has averaged just under $10 billion a year in hurricane-related property damage.  Interestingly, that comes to just 0.062% of total GDP.  By far the worst hurricane bills came due in 2005, when Katrina slammed into new Orleans, causing nearly $108 billion in damage.  Katrina represents the spike in the chart below, which shows actual hurricane damage costs per year, calculated as a percentage of America's total GDP, up to the end of 2005.

However, the article goes on to say that the actual impact on GDP is more complicated.  As the storm approaches, people stock up on food and supplies, which registers as a small spike in economic activity.  All the rebuilding in the aftermath stimulates construction activity.  Some economists believe that when you factor in seven years of repair, Katrina actually stimulated the Gulf Coast economy.  Property damage unquestionably reduces wealth, but the way we calculate economic activity, the overall impact tends to be recorded as a positive.

So what can we expect from Sandy when the economic numbers are finally published?  Start with the fact that every workday, the greater New York City economy (which includes northern New Jersey) produces $3.5 billion in gross metropolitan product.   Early assessments say that the flooding of the subway system has caused the most impact, keeping millions of people from coming to work.  If the subway system is down for more than a month, that would create an estimated $55 billion in lost productivity.   However, more realistic estimates suggest that the subway system will be functional again within ten days, and some parts were never down.  In New Jersey, some 80% of gas stations were out of commission as late as Sunday night, further crippling peoples' ability to get to work throughout the metro area.

Meanwhile, the best early estimates put property damage at $20 billion, but more recently, the insurance industry has pegged the final bill at closer to $30 billion for the NY/NJ region, which could be matched dollar-for-dollar by the contribution to growth by reconstruction and repairs.  What will not be matched are the losses of business activities at stores, restaurants and rental units.  In New Jersey, there is talk that the beaches that Sandy swept away may not be restored before the 2013 vacation season.

Add it all up, and the total short-term impact is likely to be somewhere around 0.6 percentage points taken from U.S. economic growth in the October-December quarter, and something similar added on gradually over the three or four following fiscal quarters, as New York installs raised subway entrances and flood gates, as the New Jersey shore rebuilds its historic homes, beaches, boardwalks and vacation attractions.  If you want to follow the reconstruction efforts, the federal agency known as FEMA may be the best source: http://www.fema.gov/sandy. 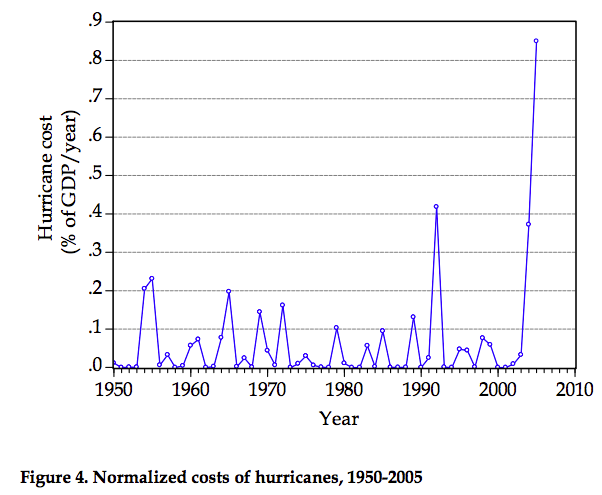