The Other Dimension of Risk

The Other Dimension of Risk

When it comes to investing in the stock market, the risk that everybody talks about is the ups and particularly the downs,

the bearish periods when the market falls dramatically and keeps falling for months or even years.  (Think: 2000-2002 or 2008)

Recently, professional advisors have begun talking about a different dimension of risk, which is just as insidious, just as potentially damaging to the wealth of their clients, but much-less-widely discussed.  It’s called “frame-of-reference” risk.

Frame-of-reference risk can be defined as the risk that people will look at the performance statement of their diversified investment portfolio and notice that its return is falling short (sometimes far short) of the market index they’re most familiar with—typically the Dow or the S&P 500.  They abandon the diversified investment approach and concentrate their holdings in the local market right as the other investments they sold are about to take the performance lead.

To see why this is a risk at all, consider the bull market in tech stocks in the late 1990s.  Figure 1 shows the rate of return in the late 1990s and early 2000s of U.S. stocks compared with an ABCD portfolio consisting of equal parts U.S. stocks, foreign stocks, commodity-linked equities and real estate investment trusts—a diversified mix of risk assets, rebalanced each year. 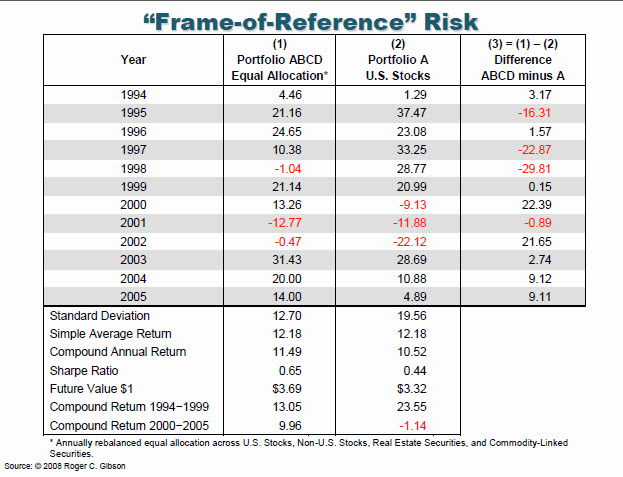 Notice that in 1995, the diversified portfolio got walloped by the U.S. markets—a difference of more than 16 percentage points.  In 1997 and 1998, the differences were even more pronounced: almost 23% and just under 30%.  This was a time when many investors were telling their advisors that the rules of investing had changed, that technology, clicks and eyeballs were the new standard by which stock values should be measured.

The advantages of buy and hold are relatively straightforward—even if they’re not easy to appreciate during a market downturn. But what, exactly, are the advantages of hanging onto a diversified portfolio?

One answer lies in the mathematics of returns.  Notice (Figure 2) that gains and losses are not symmetrical, and the differences becomes greater with magnitude.  A loss of 10% requires a modest 11% gain to get back to the original portfolio value.  But a 20% loss requires a 25% gain, a 30% loss doesn’t recover until the portfolio has achieved a subsequent 43% gain and a 50% loss doesn’t get back to even until the battered portfolio gone up 100%. 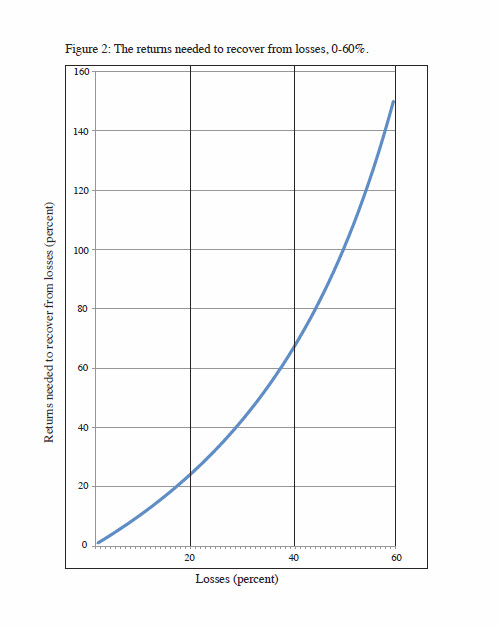 When a portfolio holds different asset classes, which move up or down out of sequence with each other (which,in the vernacular, are “not highly-correlated”), it tends to smooth out yearly investment performance.  Portfolios that deliver smoother returns don’t have to experience extreme recovery to stay in positive territory.  As a result, they will have higher terminal values than choppier portfolios, even if the average yearly return is the same.

Another answer lies in the idea of reversion to the mean.  When one asset class (like U.S. stocks) is soaring, and everything else is lagging, that means the soaring asset class is getting relatively more expensive than the others.  Eventually, prices will return to normal in both directions, and the other investments will have their day in the sun.  So when someone abandons a diversified investment approach after years of underperformance, she loses twice.  She has already paid the “penalty” (so to speak) for being diversified when diversified was losing to U.S. stocks.  Then, when she goes all-in on U.S. stocks, she loses the “benefits” that eventually follow when those other asset classes go up faster than the Dow.  The late 1990s and early 2000s were a perfect example of this.

This can be summed up neatly by looking back at the investor’s dilemma during the tech bubble.  People who held a diversified mix of the four asset classes—U.S. stocks, foreign stocks, commodity-linked investments and real estate—enjoyed a 13.05% average yearly return from 1994 through 1999.  They achieved a 9.96% return in the subsequent five years, from 2000 through 2005.

Were they happier with their higher return in the first five years?  No.  They were firing their advisors, because the U.S. stock market happened to be gaining 23.55% a year and they felt like losers.  Were they unhappy with the lower 9.96% yearly returns the diversified portfolio delivered in the subsequent five years?  No; in fact, they were ecstatic, because their portfolios were outperforming at a time when the U.S. market was losing value.

Of course, many investors today are facing this frame-of-reference risk head-on.  The U.S. market has been booming since the bottoming out in March of 2009, while the rest of the world (Eurozone, Emerging Markets etc...) has been mired in a recessionary hangover.  Real estate had a bad stretch after the Great Recession.  It’s easy to question the value of those other assets in a portfolio with the benefit of hindsight.  But with the benefit of historical perspective, the underperformance of broad asset classes usually reverses itself, and we never know exactly when that will happen.

At times like we are experiencing today, when the U.S. markets are enjoying a long uninterrupted run of good fortune, frame-of-reference risk starts to come out of the closet and threaten your financial health.   All we know about frame-of-reference risk is that, just like the more well-known volatility risks, it lures investors to abandon their long-term strategy at the wrong time—and when people give in to it, it becomes a net destroyer of wealth.