As the U.S. economy has slowly, steadily lumbered out of the Great Recession, the biggest drag on recovery has been housing.

As you can see from the accompanying chart, existing home sales have never recovered their 2007 levels, despite several government stimulus efforts (which represent the spikes in the graph).  Meanwhile, newly-constructed single family home sales have been hovering near levels that represented the bottom of previous recessions.  In the latest statistics, groundbreakings on new homes actually fell by 2.8% in October compared with September. 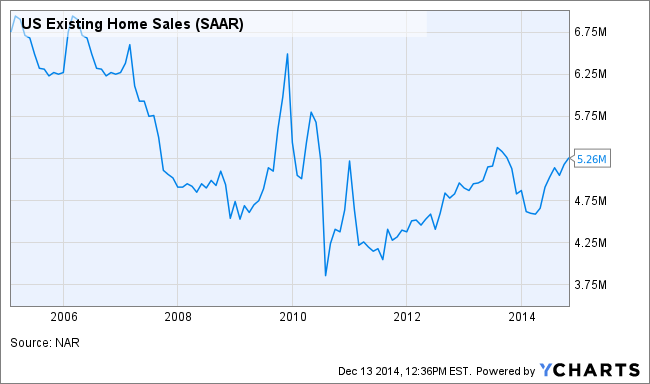 Depressed home sales—both new and used—have a negative effect on many sectors of the economy, from the materials to make the houses, appliance sales—plus, of course, the income of many thousands of construction workers, appraisers and realtors.  During healthy times, home construction and sales make up 9% of all economic activity, compared with just under 6% today.  When you take a second look at the chart, it’s remarkable that the American economy has been able to show continued growth while dragging housing activity like a ball and chain behind it.

But things may be looking up in the housing sector.  In recent weeks, Fannie Mae and Freddie Mac, the two government-backed mortgage companies that provide loan guarantees to lending institutions, have quietly adjusted their loan guarantee guidelines in ways that will make it easier for borrowers to secure loans.  Under the new rules, any loans with no missed payments for 36 consecutive months after they were first issued will be backed by the Freddie or Fannie should they default.  In the past, the agencies kept their policies unclear, and maintained that they could force lenders to buy back nonperforming loans without explanation.  The new policy will make loans less risky for lenders to extend to consumers.

Perhaps more importantly, new guidelines were issued that will make it easier for Gen Y buyers to come into the market.  Since 2008, lenders have been requiring home buyers to have near-perfect credit, and even then to pay 20% down on their home purchase.  Now, going forward, Freddie and Fannie will start backing loans where the borrower puts down just 3%—a huge relief for first-time homebuyers.  Look for these simple shifts in policy to accomplish more stimulus to the housing market—and to the U.S. economy—than any of the emergency measures passed in the wake of the economic downturn.  And, sometime in the first quarter of next year, you might see articles talking about an unexpected housing recovery and windfall GDP growth that has economists scratching their heads.