By now, you've read that the economy added a "lackluster" number of jobs in June, which suggests that the unemployment rate is

reading water.  This follows similar reports in May, and makes it easier to feel gloomy about America's long-term economic prospects.

But if you've been watching the jobs numbers in recent years, you might feel a bit dizzy from the gloom followed by euphoria followed by gloom--and if you're not dizzy, you might feel confused.  If you look at the attached chart, the situation might be a little easier to understand.

The first thing you notice is all the blue bars cascading under the horizontal line toward the left side of the graph.  That represents jobs lost during the awful financial crisis of 2008-2009, when brokers at the major financial institutions were recklessly selling junk securities into the global financial system and taking the world to the brink of economic collapse.  Then you look at the recovery period, including the fiscal stimulus that added jobs in the second quarter of 2010.  (Also note the end of the fiscal stimulus, when job creation dropped back into negative territory.)  Since then, growth has been steady, but compared with what was lost, you can see that the jobs market is still digging itself out of a deep hole.

But if you look more closely, you can see how cyclical those job growth numbers have been recently.  There were marked declines in the summer of 2010, the summer of 2011, and now the Summer of 2012.  The headlines didn't give us this perspective last year, and this year the press isn't doing a very good job of helping us see that the Summer has been consistently associated with less robust job growth than the other quarters of the year.

In each year, after June, July and August, there have been fairly predictable upturns--and then, of course, the press announced with great fanfare that job growth had once again picked up.  We don't know if that will happen this year or not, but based on recent track record, it is certainly possible that people who are spooked by the June numbers may be reading optimistic news toward the end of September--not because of any underlying change in the economy, but due to the cyclical nature of this pattern of job creation.

Why does this matter?  Because investors affect the market either negatively or positively depending on how they view prospects for the economy.  If they read that the economy is stalled or about to teeter off of a precipice, they sell risk assets and retreat to Treasuries, pushing share prices down, spooking others, and stocks become cheaper to purchase for longer-term investors.  When there are more optimistic jobs reports, and investors start to feel more confident about the future, people buy back into the market, pushing prices up.  As the rollercoaster rolls upward, it rewards those investors who were patient or opportunistic when the news was gloomy.

This is not new news; research by Morningstar and the Dalbar organization have shown that the average investor gets much less return than the market averages.  This is just one possible example of how this unhappy process works against the majority of investors, and gives the steadier investors a little wind at their backs.  It also might make you feel a little less concerned that, once again, the months traditionally associated with summer vacation have seen a decline in overall hiring. 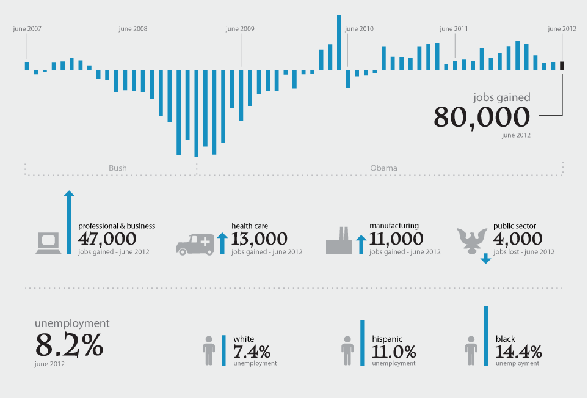