The U.S. stock market has delivered positive returns to investors for six consecutive years, and in five of those years,

How is that possible, since America’s corporations, to a large extent, ARE America’s economy?

One answer is share buybacks.  These are exactly what they sound like: a company uses some of its extra cash to buy back outstanding shares of its own stock.  Or, in many cases recently, companies issue bonds in the current low-interest-rate environment and use the cheap money to make aggressive stock purchases.

Big picture, there are two ways for a company to give back some of its profits to shareholders.  The most straightforward is to return some of that money in the form of dividends, which, until the 2013 tax year, used to receive preferential tax treatment.  (They are now taxed at a shareholder’s income tax rate.)

Buying back stock is the other alternative.  A share buyback reduces the number of shares available to be purchased.  This, in turn, raises the average revenues and profits per share.  It also reduces the supply of stock available to investors, which tends to raise demand for increasingly scarce shares.  As you can see in Figure 1, the total number of shares outstanding for all S&P 500 firms, after rising dramatically from around 1990 to around 2005, has gone into an unprecedented decline over the last 10 years. 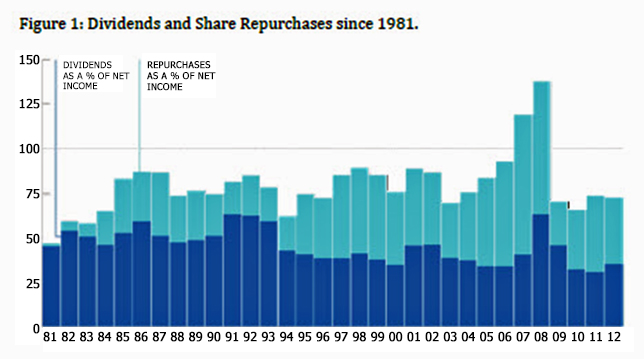 Fewer shares, and higher earnings per share, both tend to cause the price of a stock to go up, even if the company isn’t any more profitable than it was before.  This explains what would otherwise be a mathematical anomaly: how stocks and profits per share can rise faster than the economic growth of the country as a whole.

Arguably, this is a more efficient way to return money to investors than simply writing a dividend check.  When the stock goes up, it generates capital gains for long-term (more than 12 months) investors in the stock and these capital gains are taxed at preferential levels of 0% for lower income earners, up to 20% for those in the 39.6% bracket.  Better yet, these capital gains can be deferred until the investor sells the stock.  They might even be deferred into a year when the investor is in a lower tax bracket.

As you can see from Figure 2, over the last 33 years, companies have tended to pay slightly lower dividends as a percentage of net income, and have dramatically raised the amount they’re spending to buy their own stock.  In fact, during the long bull market following the Great Recession, the largest buyer of stocks, in aggregate, has actually been Corporate America itself. 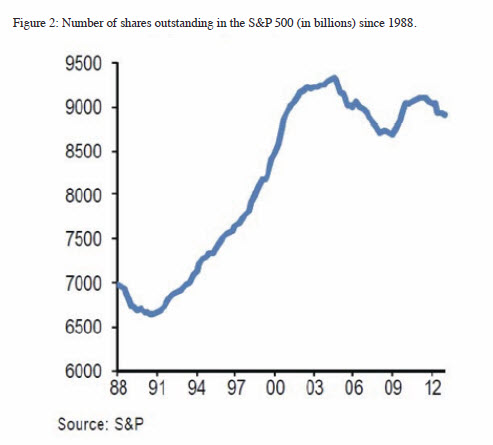 The numbers are pretty dramatic.  In 2013, the companies listed in the S&P 500 index spent $478 billion on share repurchases, a 24% increase over 2012.  Last year, that figure rose to an estimated $565 billion.  In 2007 and 2008, companies, in aggregate, managed to pay out, in total, more than they earned—borrowing some of the money that they returned to shareholders.

Looking at Figure 3, produced by the Federal Reserve Board of Governors, we can see that as stock market prices have gone up, and share buyback activity has soared, so too has total corporate debt, to levels far exceeding anything our economy has ever seen before. 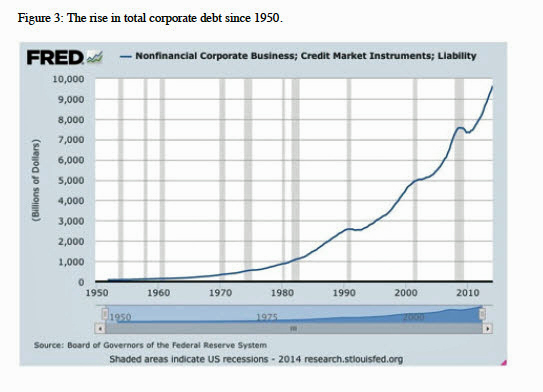 Is this borrowing-to-buy-your-own-stock activity sustainable in the long-term?  Probably not.  When interest rates rise, companies will almost certainly slow down their debt issuance, and some of the money funding share buybacks will no longer be available.  By then, however, the economy may be in full recovery, and companies won’t need to buy their shares in order to keep their stock prices on an uptrend.  Then all of us will go back to a more normal relationship between growth of the economy and growth of our investments.