Why would any investment "opportunity" guarantee a negative return to its investors, who happen to be some of the shrewdest minds in the

This situation actually exists today--and the story is interesting.  The European Central Bank has recently dropped its bank deposit rate to -0.1%.  That means that if European-based lending institutions invest their assets in the Central Bank's money fund, they are guaranteed to receive less money when they take it back out again.  The fund is a guaranteed loser.

The comparable number in the U.S.--the return offered by the U.S. Federal Reserve to banks that want to park their excess capital in an interest-bearing account--is 0.25%.  That isn't very much, but many banks find it preferable to, for example, giving you a 30-year mortgage at around 4% (current rates, in other words) when the Fed's own economists expect the Fed Funds rate to reach 4% sometime in the next year or two.  This explains why $4.34 trillion in bank reserves are sitting on the sidelines at a time when our economy sorely needs an investment boost.  (You can see a graph of total reserve assets here: http://research.stlouisfed.org/fred2/series/WALCL ).  And it also explains why people with excellent credit scores are having trouble finding a bank willing to finance their home purchase. 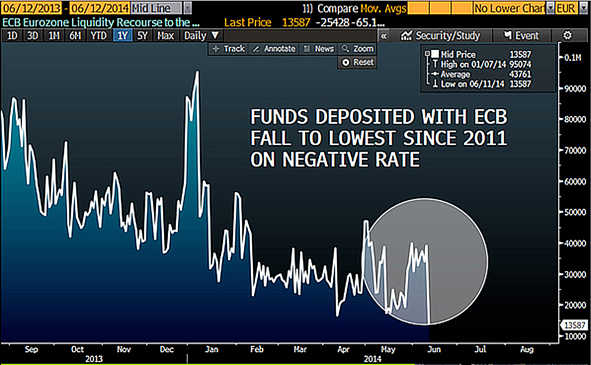 So why has the ECB dropped its own rate below zero?  By making it actually painful to park banking reserves, it wants to shake that sleeping money out of its accounts and back where it belongs: into the European economy.  The strategy appears to be working; the graph shows that reserves have dropped--very suddenly, since the announcement--to their lowest point since 2011.  This may be the only example in history where billions of dollars were invested in an investment "opportunity" that was absolutely, positively guaranteed to lose money.