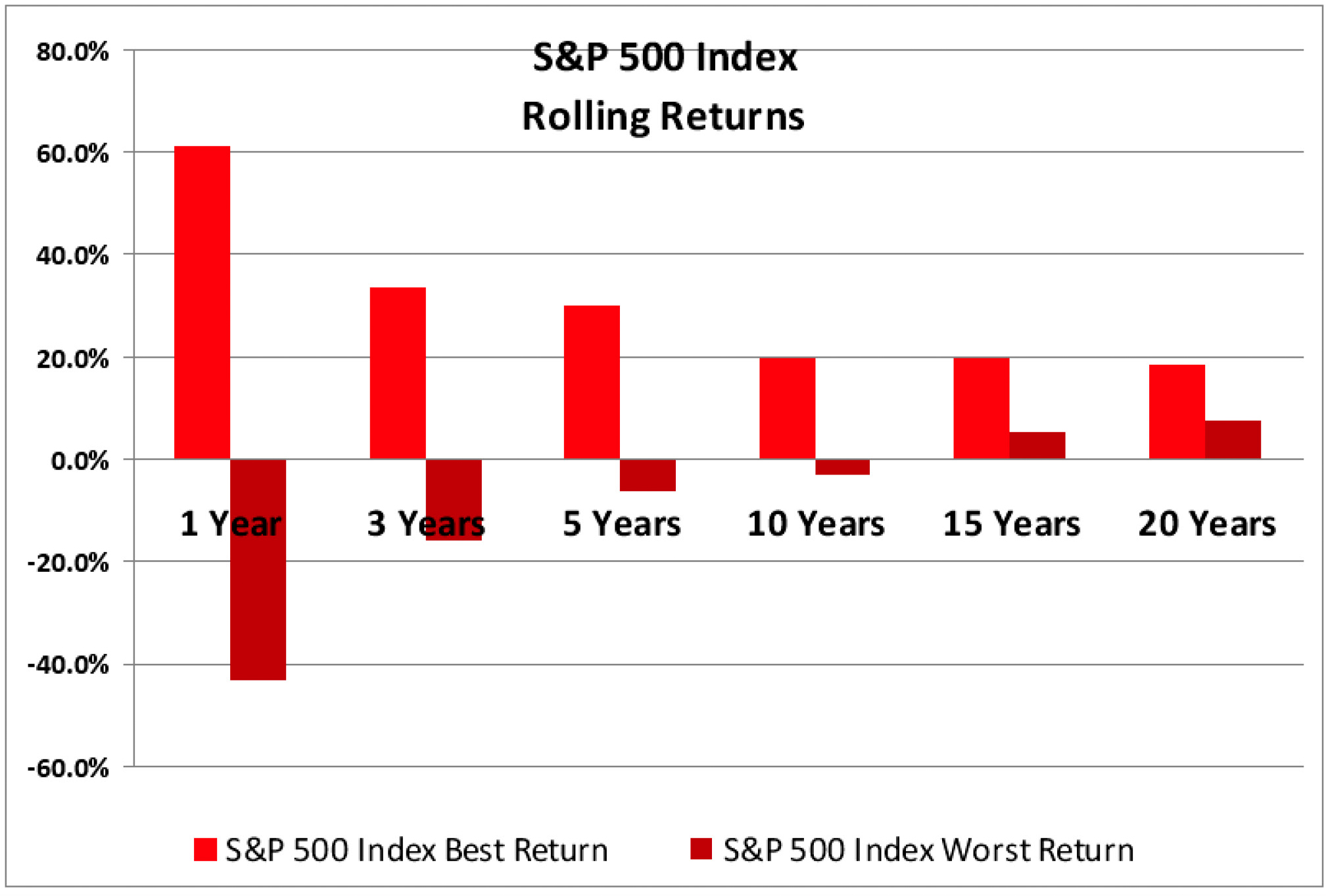 Based purely on U.S. data, the professional advisors seem to be getting the better of the debate, as you can see in the accompanying chart, which shows rolling returns from 1973 through mid-2009.  As you can see, the outcomes in any one year have been frighteningly hard to predict, ranging anywhere from a 60% gain to a 40% loss.  But if you hold that stock portfolio for three years, the best and worst are less dramatic than the best and worst returns over one year, and the returns are flattening out gradually over 10, 15 and 20 years.  No 20-year time period in this study showed a negative annual rate of return.

But this is a fairly limited data set.  What happens if you look at other countries and extend this research over longer time periods?  This is exactly what David Blanchett at Morningstar, Michael Finke at Texas Tech University and Wade Pfau at the American College did in a new paper, as yet unpublished, which you can find here: http://papers.ssrn.com/sol3/papers.cfm?abstract_id=2320828.

The authors examined real (inflation-adjusted) historical return patterns for stocks, bonds and cash in 20 industrialized countries, each over a 113-year time period.  The sample size thus represents 2,260 return years, and the authors parsed the data by individual time periods and a variety of rolling time periods, which certainly expands the sample size beyond 87 years of U.S. market behavior.

What did they find?  Looking at investors with different propensities for risk, they found that in general, people experienced less risk holding more stocks over longer time periods.  The only exceptions were short periods of time for investors in Italy and Australia.  The effect of time-dampened returns was particularly robust in the United Kingdom, Japan, Denmark, Austria, New Zealand, South Africa and the U.S.

Overall, the authors found that a timid investor with a long-term time horizon should increase his/her equity allocation by about 2.7% for each year of that time horizon, from whatever the optimal allocation would have been for one year.  The adventurous investor with low risk aversion should raise equity allocation by 1.3% a year.  If that sounds backwards, consider that the timid investor started out with a much lower stock allocation than the dare-devil investor--what the authors call the "intercept" of the Y axis where the slope begins.

Does that mean that returns in the future are guaranteed to follow this pattern?  Of course not.  But there seems to be some mechanism that brings security prices back to some kind of "normal" long-term return.  It could be explained buy the fact that investors tend to be more risk-averse when valuations (represented by the P/E ratios) are most attractive (when stocks, in other words, are on sale, but investors are smarting from recent market losses), and most tolerant of risk during the later stages of bull markets (when people are sitting on significant gains).  In other words, market sentiment seems to view the future opportunity backwards.

Is it possible that stocks are not really fairly priced at all times, but instead are constantly fluctuating above and below some hard-to-discern "true" or "intrinsic" value, which is rising far more steadily below the waves?  That underlying growth would represent the long-term geometric investment return, more or less--or, at least, it might have a relationship with it that is not well-explored.  The old saw that stocks eventually return to their real values, that the market, long-term, is a weighing machine, might be valid after all.