Are you getting enough sleep?  If not, you might be costing your employer significant productivity, which the Rand Europe think tank has now translated into aggregate dollars across the global economy.

The researchers say that the U.S. and Japan are by far the economies losing the most through sleep deprivation.  Some 1.2 million working days are lost in the U.S. each year, with costs amounting to an astonishing 2.28% of America's GDP ($411 billion); see chart.  Japan is number two on the narcolepsy scale, losing an estimated 600,000 working days and $138 billion worth of lost productivity.  Germany, the U.K. and Canada are, by comparison, getting more and better sleep. 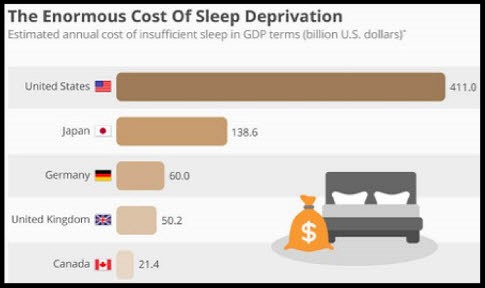