The coronavirus has injected uncertainty into the global economy. Markets appear to be reacting to news that the virus has spread beyond China to South Korea, Italy, Iran, and other countries. While Vanguard has a global team of economists, lack of certainty about how far the coronavirus will spread makes economic projections particularly challenging. In the absence of that certainty, below we provide a deep analysis of how the coronavirus may affect China's growth and the potential for spillover.

The coronavirus COVID-19 is likely to slow 2020 global economic growth by about 0.15 percentage point, according to Vanguard economists. That equates to roughly $135 billion in goods and services not produced, or at least delayed.

The epidemic's economic consequences this year will be driven by three factors—the virus's reach and duration; fear, which inhibits travel, consumer spending, manufacturing, and trade; and government actions both to arrest the virus and stimulate faster growth. The net effects won't become clear for at least several months.

The onset of the coronavirus adds great uncertainty to China's economic path, said Qian Wang, Vanguard's chief economist for the Asia-Pacific region. In addition to concerns about data collection and transparency, the emergence of the virus coincides with the government's annual merging of macroeconomic data releases for January and February, a process that smooths distortions due to the Lunar New Year holiday.

As noted in our economic outlook for 2020, the effects of the multiyear escalation in U.S.-China trade tensions became evident in 2019, and stimulus measures struggled to rejuvenate a fraught private sector. Thus, we entered the year expecting a continuation of the decade-long moderation in Chinese economic growth, into the upper-5% range this year.

The virus clearly has changed the Chinese economy—to say nothing of everyday life for roughly 20% of the world’s inhabitants. Many Chinese have not returned from traditional Lunar New Year trips, countless factories have been shut, and millions of students have had to rely on online schooling. 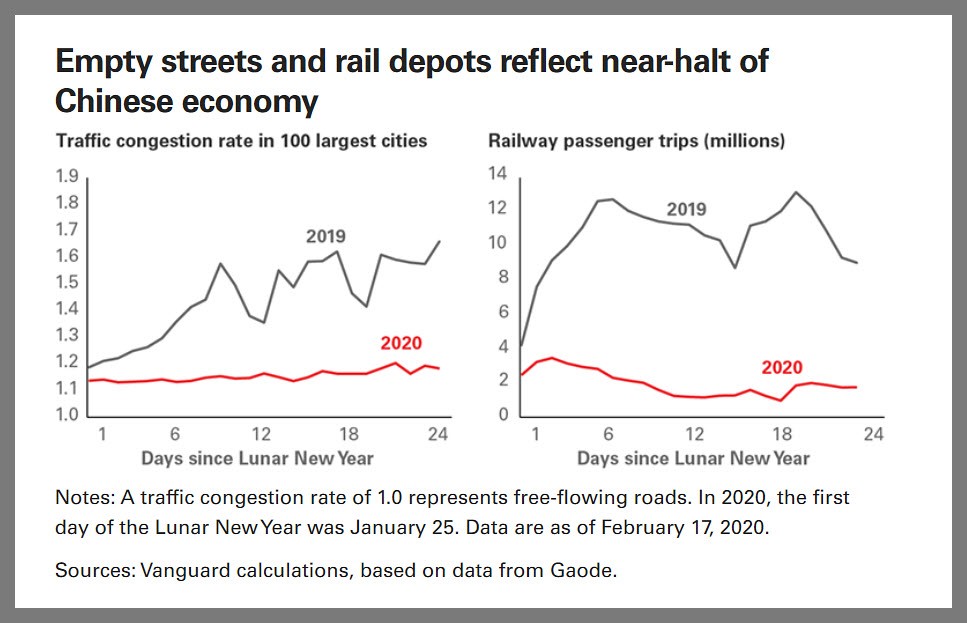 Our Investment Strategy Group estimates that the virus will take about 0.5 percentage point of growth from China's economy this year, said Ms. Wang. That represents roughly 534 billion yuan, or $76 billion, in goods and services not produced, or at least delayed.2 We now expect China's 2020 growth in the range of 5.0%–5.5%.

More than One Path is Possible for China's Economy

A couple of scenarios could leave China’s 2020 economic growth in the 5.0%–5.5% range. The more optimistic scenario would be if economic activity, following a peak in the number of confirmed coronavirus cases, returns to normal between late February and mid-March. Even so, we'd expect first-quarter growth to be noticeably affected by the virus, given that manufacturing and consumption largely stood still in February. In this scenario, first-quarter growth would be modest at best, bringing full-year growth down to the mid-5% range from a reported 6.1% last year.

A second, more plausible, path to 2020 growth in the low-5% range is a continuation of mass quarantines and business shutdowns, with economic activity not returning to normal until perhaps early in the second quarter. In this scenario, we'd expect a meaningful decline in economic output from the fourth quarter of 2019 and a sharp, V-shaped recovery afterward. There would be moderate supply-chain disruptions around the globe.

A less likely but important scenario to watch for is the "false recovery," with activity getting back to normal only to be followed by a reemergence of the virus. In this case, output would lag through the first half of the year, the government would enact more aggressive stimulus programs, and full-year Chinese growth would fall into the high-4% range. Global growth would slow by perhaps half of a percentage point.

China’s 2020 Economic Path will not be Clear for Months 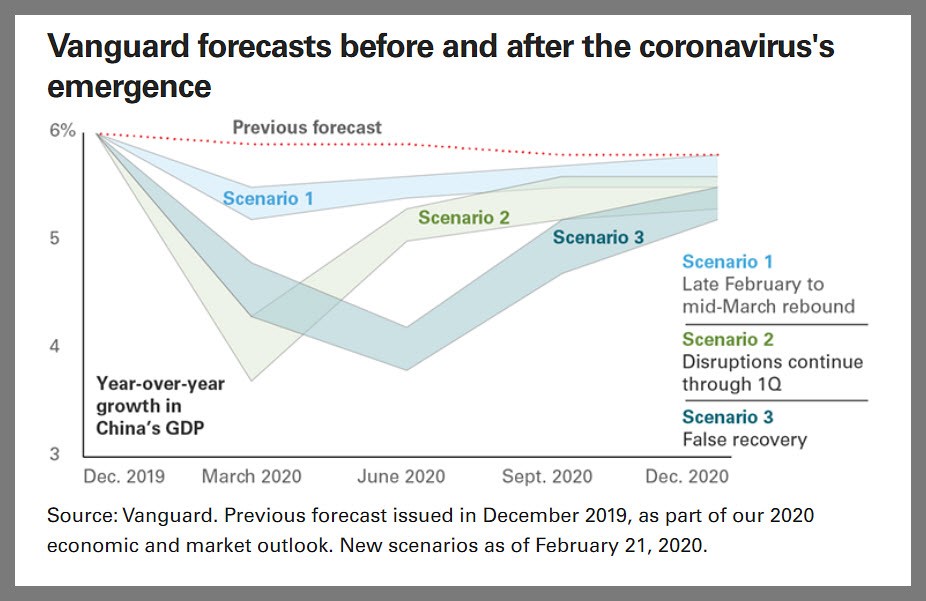 It's important to note, Ms. Wang said, our assumption that the virus will stay primarily contained in mainland China. If it spreads more widely outside China, a bigger global slowdown could occur.

The Coronavirus’s Economic Consequences Outside of China

Adam Schickling, economist for Vanguard, estimated that $59 billion or more in economic activity outside of China would be lost or at least delayed by virus-related reductions in trade and travel.3 His estimate reflects the size of the Chinese economy and its links to much of the rest of the world. China now accounts for roughly 18% of global economic activity, including 31% of manufacturing, 12% of exports, and 18% of travel spending.

While certain U.S. industries—notably, auto and auto parts makers and textile consumers, such as clothing retailers—could be hit hard by extended disruptions in supplies from China, the economic effects of the coronavirus on the broad U.S. economy should be modest. Indeed, although the U.S. is the largest destination for Chinese exports by dollar value, we envision in our base case just 0.1 percentage point in lost or delayed U.S. economic activity.

As shown in the chart below, emerging markets in Asia are likely to be hit much harder economically than the United States. 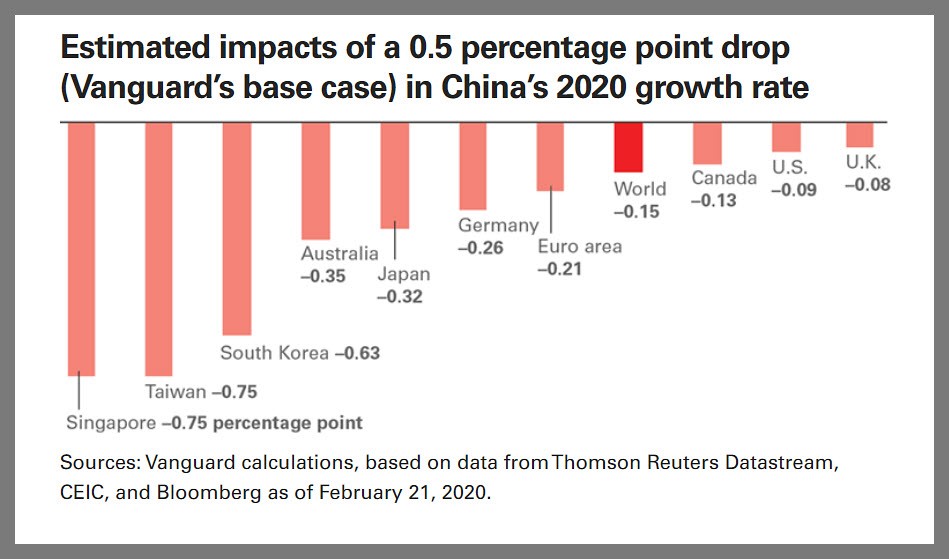 The Longer-Term Economic Outlook for China

"The coronavirus brings volatility to China and the world, but it does not change long-term trends, such as globalization, technology, and demographics," said Wang.

China joined the World Trade Organization in 2001, and export and housing booms followed. Real (inflation-adjusted) annualized growth peaked at a government-reported 14% in 2007.

But the country's economic growth has been slowing more or less steadily since the global financial crisis of 2008–2009. The slowdown is a natural part of the transition from an industrial-led to a consumer-driven economy. It also reflects an aging population and, more recently, the U.S.-China trade conflict, which only in late 2019 was partly resolved with a "phase one" pact.

Changes in trading relationships, politics, and governance have complicated China's transition to a developed economy. And rising uncertainty externally may increase the temptation for Chinese policymakers to emphasize short-term growth stability to the detriment of longer-term financial stability and structural reforms. The result could be Japanese-style stagnation or emerging-market-style instability, in which falling productivity growth and lower capital investment lead to much lower growth.

On the other hand, U.S.-China tensions could prompt Chinese leaders to pursue reforms and greater economic productivity. Under such circumstances, the chance of both a smooth rebalancing and a hard landing would increase, with smooth rebalancing more likely given adequate policy cushions and recent progress on excess economic capacity. 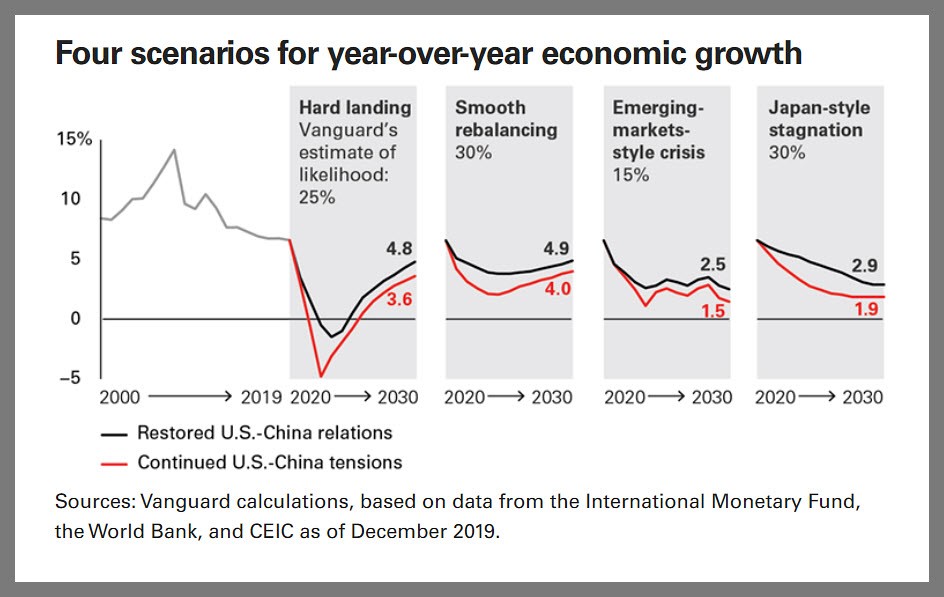 For more than a decade now, globally diversified investors have enjoyed a more or less uninterrupted run of rising stock and bond prices. Risk at times may have seemed more theoretical than real. But if the risk of investing is not always as visible, it is ever-present just the same.

Remind clients to keep their eyes fixed on their long-term goals and to maintain portfolios that are balanced across asset classes and diversified within them, in mixes that reflect their tolerance for risk.

When the financial markets are in turmoil and account balances start to fall, there is a strong temptation to ask your financial advisors to "do something" to stem any perceived losses. Yet it is often the case that staying the course-or doing nothing-proves to be the better path.

Here is one recent example: A hypothetical 60% stock/40% bond portfolio that stood at $1 million on the morning of November 1, 2018, would have lost 5.7% of its value by Christmas Eve. Yet selling the portfolio at that time and fleeing the markets, even if briefly, would have cost an investor tens of thousands of dollars in two months, versus the alternative of staying invested.

When faced with a similar situation, consider how you might feel if markets rebounded and you could have recouped all your money, and more. That's why it's best to stick to the long-term plan you and your advisor have built. Any changes should be made because of changes in your life, not changes in the markets. If you have any questions about making portfolio moves, remember to talk to your financial advisor before acting. 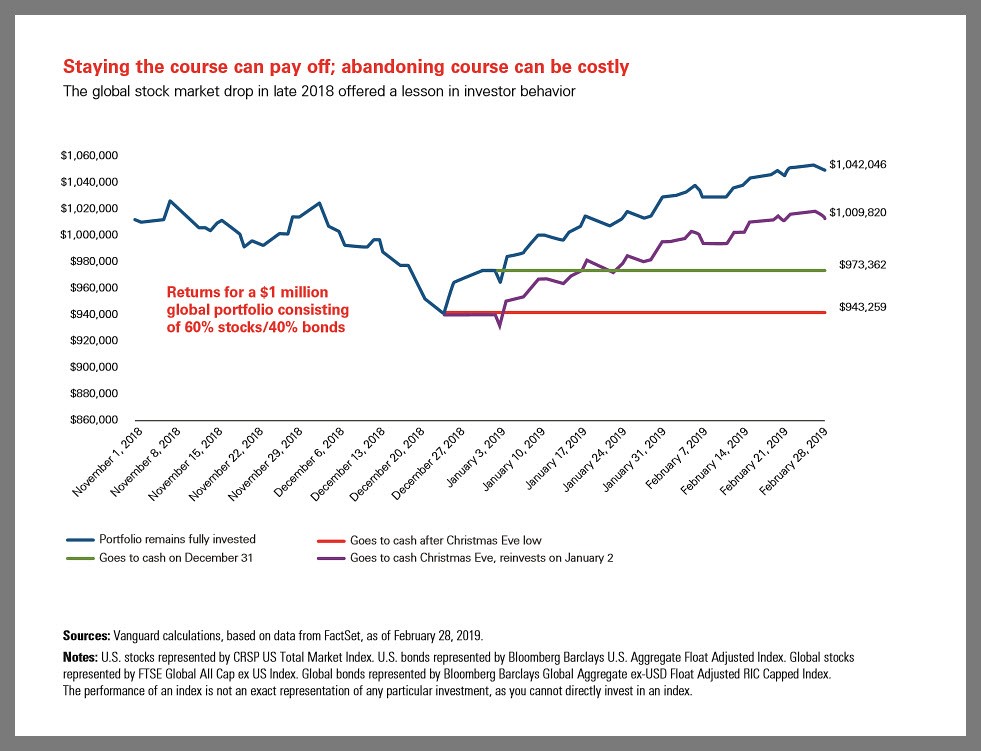