From an investing standpoint, we are in uncharted waters, right? The two-month downturn, February and March, were certainly severe. But an article authored by Paul Kaplan of Morningstar, using data from Ibbotson Associates (a Morningstar subsidiary), shows that bear markets can come in all shapes and sizes, and they are not actually very unusual. 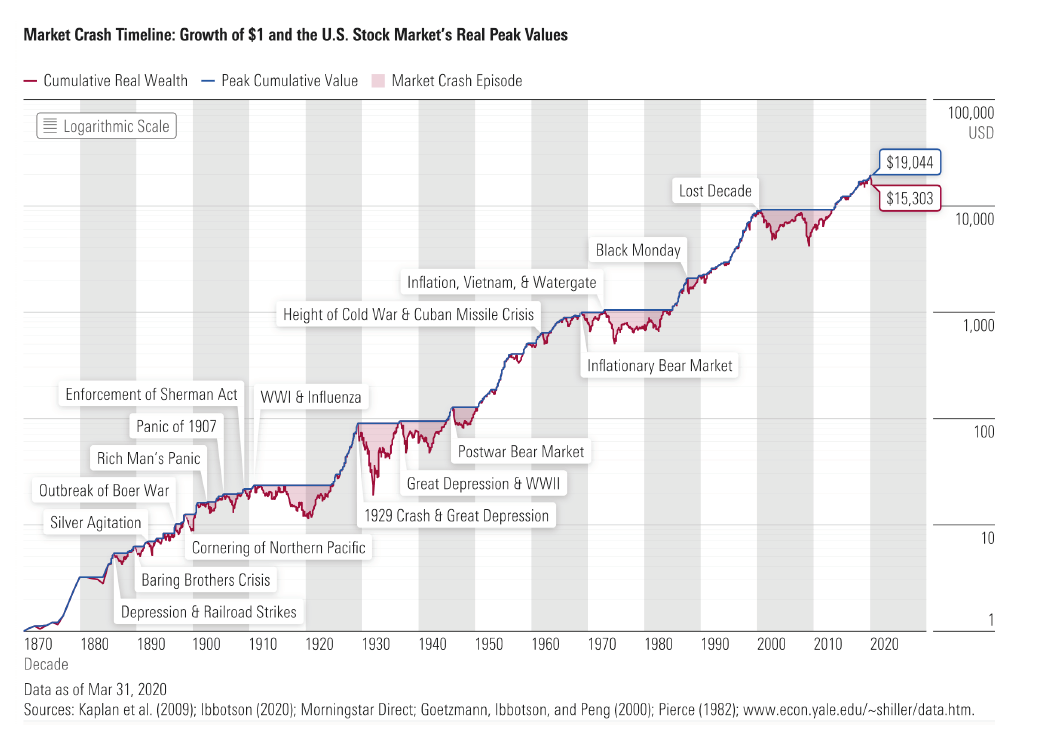 The chart here goes back 150 years, and shows 17 bear markets, ranging in severity from the 1929 crash through the Great Depression to the relatively quick downturn during the Cuban Missile Crisis in 1962. Over that long time period, bear markets (defined as a 20% decline in the major indices) occurred roughly every nine years. Each time, obviously excepting the present one, the markets eventually recovered to achieve new highs, but some—as you can see—took much longer than others.

The article ranks all 17 bear markets according to the length from the beginning of the downturn until the time when the index had recovered to the same level, and also takes into account the severity of the decline. So for example, an investor holding equities at the beginning of the bear market beginning in August of 1929 would have experienced a 79% decline in the value of his holdings, and wouldn’t have gotten back to even until November of 1936—seven years later. The next bear market started the following February, and saw another 49.93% drop, so this was a pretty painful time to be invested.

In contrast, the Black Monday crash starting in August of 1987 saw a downturn of 30.21%—pretty scary, until you consider that an investor would have been made whole less than two years later, in July 1989. The downturn associated with the Cuban Missile crisis barely qualified as a bear market; investors experienced a 22.80% decline, and were back where they had been before a year and a half later.

The article doesn’t attempt to minimize the pain that investors are experiencing during the present downturn, or extrapolate how long it will take to get back to the previous high. But it does note that over the last 150 years, a one dollar investment in the U.S. market would have grown to $15,303 by the end of March 2020. As you can see from the chart, we are far from experiencing the pain of some of the more severe downturns of the past, and overall, staying invested through the scary times has inevitably turned out to be a winning strategy.