Should today's 70-year-old American be considered "old?"  How do you define that term these days?  Statistically,

your average 70-year-old has just a 2% chance of dying within a year.  The estimated upper limits of average life expectancy is now 97, and a rapidly growing number of 70-year-olds will live past age 100.

Perhaps more importantly, today's 70-year-olds are in much better shape than their grandparents were at the same age. In most developed countries, healthy life expectancy from age 50 is growing faster than life expectancy itself, suggesting that the period of diminished vigor and ill health towards the end of life is being compressed.

A recent series of articles in the Economist magazine suggest that we need a new term for people age 65 to 85, who are generally hale and hearty, capable of knowledge-based work on an equal footing with 25-year-olds, and who are increasingly being shunted out of the workforce as if they were invalids or, well, "old."  Indeed, the article suggests that if this cohort does NOT start returning to the workplace, the impact could be catastrophic on society as a whole. 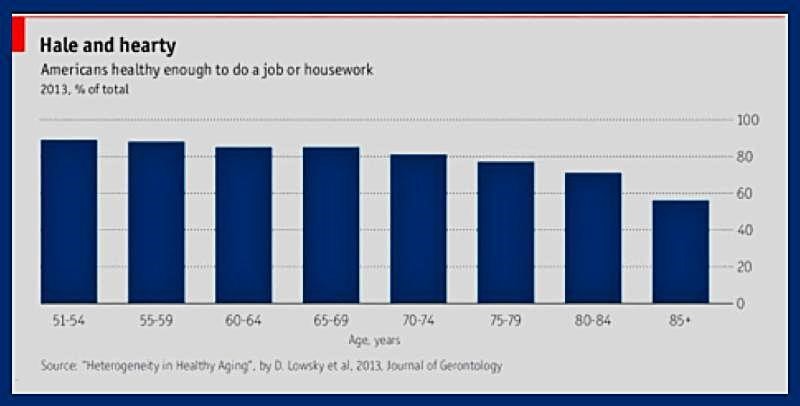 Globally, a combination of falling birth rates and increasing lifespans threaten to increase the "old-age dependency ratio" (the ratio of retired people to active workers) from 13% in 2015 to 38% by the end of the century.  That, in turn, could lead to huge fiscal strains on our pension and Social Security systems, because fewer workers would be paying for retirement benefits for more retirees.

What to do?  The article notes that, in the past, whenever a new life stage was identified, deep societal and economic changes followed in the wake.  A new focus on childhood in the 19th century paved the way for child-protection laws, mandatory schooling and a host of new businesses, from toy making to children's books.  When teenagers were first singled out as a distinct demographic in America in the 1940s, they turned out to be a great source of economic value, thanks to their willingness to work part-time and spend their income freely on new goods and services.

The next most logical shift in our thinking could be separating out people age 65-80 from the traditional "old" and "retiree" category-and calling them something different.  (The article doesn't offer a suggested name.)  They might continue at their desks, or downshift into the kinds of part-time work that emphasize knowledge and relationships.  Many who experienced mandatory retirement retired to the so-called gig economy.  Though gigging is usually seen as something that young people do, in many ways it suits older people better. They are often content to work part-time, are not looking for career progression and are better able to deal with the precariousness of such jobs. The article notes that a quarter of drivers for Uber are over 50.

More broadly, a quarter of all Americans who say they work in the "sharing economy" are over 55.  Businesses that offer on-demand lawyers, accountants, teachers and personal assistants are finding plenty of recruits among older people.

Still others are preparing for life beyond traditional retirement by becoming entrepreneurs. In America people between 55 and 65 are now 65% more likely to startup companies than those between 20 and 34.  In Britain 40% of new founders are over 50, and almost 60% of the over-70s who are still working are self-employed.

One large economic contribution made by older people that does not show up in the numbers is unpaid work. In Italy and Portugal around one grandmother in five provides daily care for a grandchild, estimates Karen Glaser from King's College London. That frees parents to go out to work, saving huge sums on child care.

All of these changes represent societal adjustments to a reality that isn't well-publicized: that the traditional retirement age increasingly makes no sense in terms of health, longevity and the ability to contribute.  The sooner we find a label for healthy people age 65 to 80, the faster we can start recognizing their potential to contribute.