The bull market continued for another year, causing market indices to soar to new heights over and over again

Looking at large cap stocks, the Wilshire U.S. Large Cap index gained 6.70% in the fourth quarter, providing a 21.84% return for the year.  The Russell 1000 large-cap index finished the year with a similar 21.69% gain, while the widely-quoted S&P 500 index of large company stocks gained 6.12% during the year's final quarter and overall returned 19.42% gains in calendar 2017.

International stocks are also participating in the Bull Run.  The broad-based EAFE index of companies in developed foreign economies gained 3.90% in the recent quarter, and ended the year up 21.78% in dollar terms.  In aggregate, European stocks were up 22.13% in 2017, while EAFE's Far East Index gained 23.37%.  Emerging market stocks of less developed countries, as represented by the EAFE EM index, rose 7.09% in dollar terms in the fourth quarter, giving these very small components of most investment portfolios a remarkable 34.35% gain for the year.

Looking over the other investment categories, real estate, as measured by the Wilshire U.S. REIT index, posted a meager 1.70% gain during the year's final quarter, yet finished the year up a respectable 4.18%.  The S&P GSCI index, which measures commodities returns, gained 9.90% in the 4th quarter, to finish the year up 5.77%.

This was a year when investors ignored the dire headlines, North Korean missile threats, hurricane devastation and a rapidly-growing national deficit to produce one of the smoothest investment rides in the past century.  As you can see in the accompanying chart, which was compiled through the end of October, the VIX "fear" index has produced the lowest volatility since data has been collected starting in 1990.  In October, the S&P 500 index broke its all-time record of consecutive days without a 3% drawdown.  The biggest single-day drop in 2017 was just under 2%. 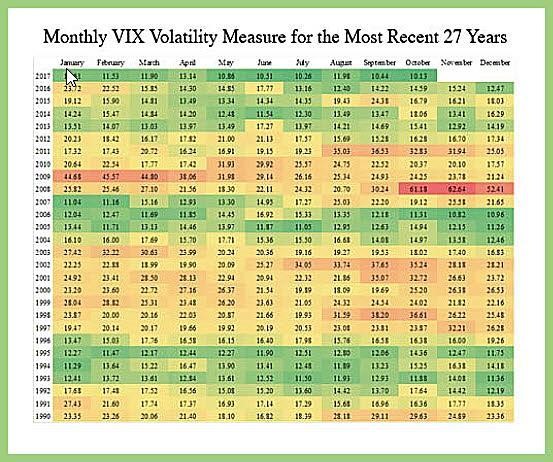 How long can this continue?  Who knows?  The S&P 500 is now trading at around 18 times forward earnings, which is above the historical average of 16-which, loosely translated, means you aren't getting a bargain when you buy stocks today.  At the same time, we are experiencing low unemployment rates and solid profits for American companies.  The U.S. economy is growing at a 3% rate.  And the psychology of the markets doesn't match what you traditionally see at market tops: people still seem to be suspicious about how long the market rally will last, unlike the normal buying frenzy that often presages the next sharp downturn.  (To see what a market frenzy looks like, are you hearing more about bitcoin than you have in the past?)

And indeed, not all stocks have prospered despite the rise in indices.  A company called Range Resources lost 54% in 2017 due to continuing low fuel prices, and firms you've heard of incurred significant drawdowns, including General Electric (-43%), Mattel (-43%), Advance Auto Parts (-42%) and the Apache oil and gas company (-34%).

Eventually, there will be a broader bear market which will see most stocks lose value.  It will be impossible to spot by forecasters, but will seem inevitable with the benefit of hindsight.  The important thing to remember is that few people have ever become extremely wealthy by timing the market and jumping out because they think they can predict the next downturn.  Many have gotten significantly wealthier by holding on whenever the raft hits the rapids.  We missed the rapids in 2017, but everybody knows they're coming-someday, though perhaps not soon.  Let's make sure we have a tight grip anyway with proper asset allocations. 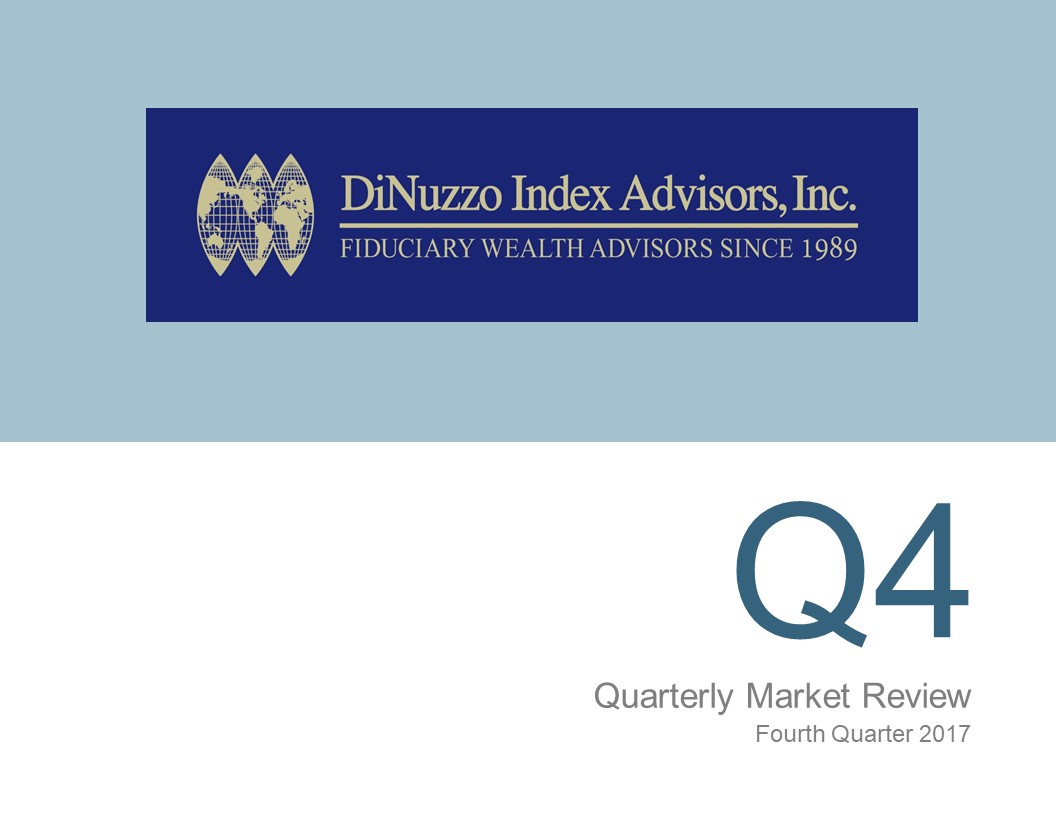 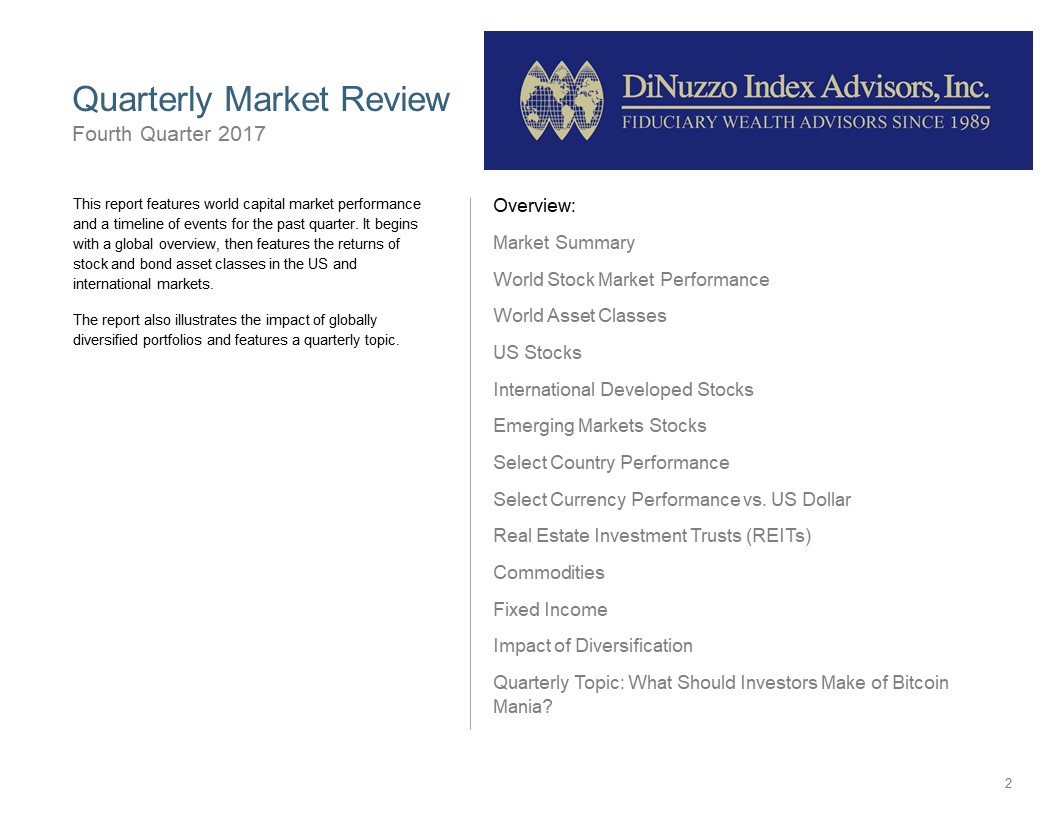 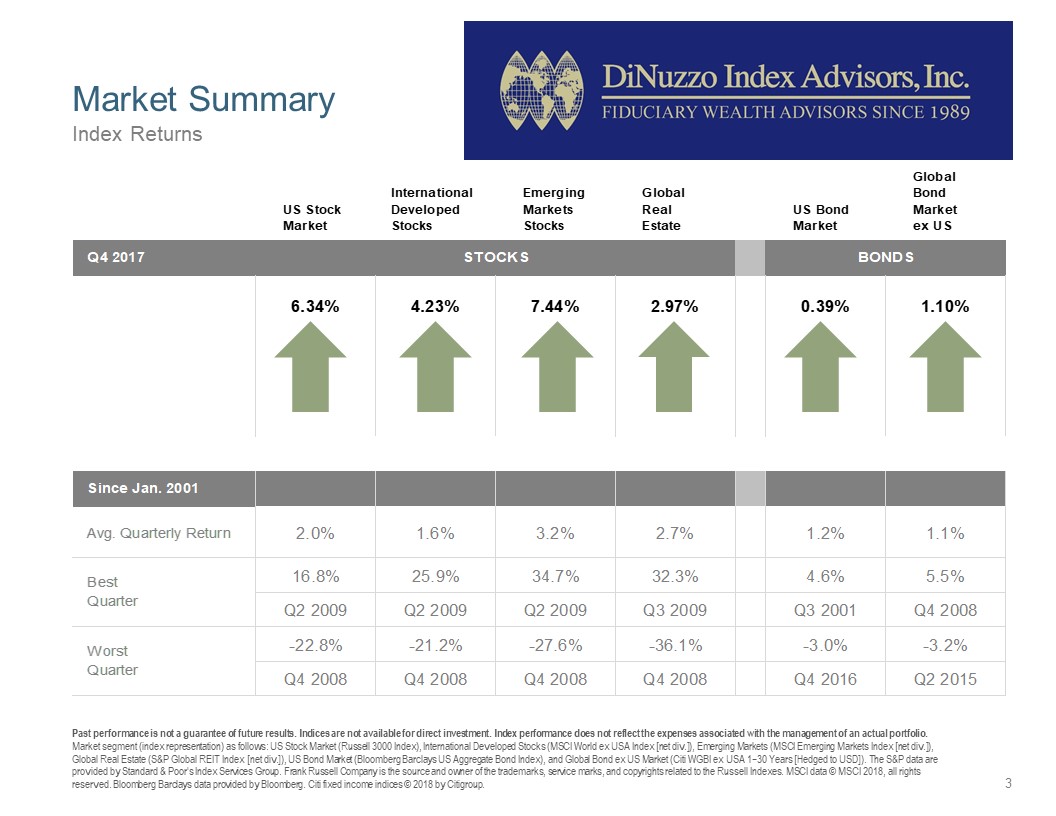 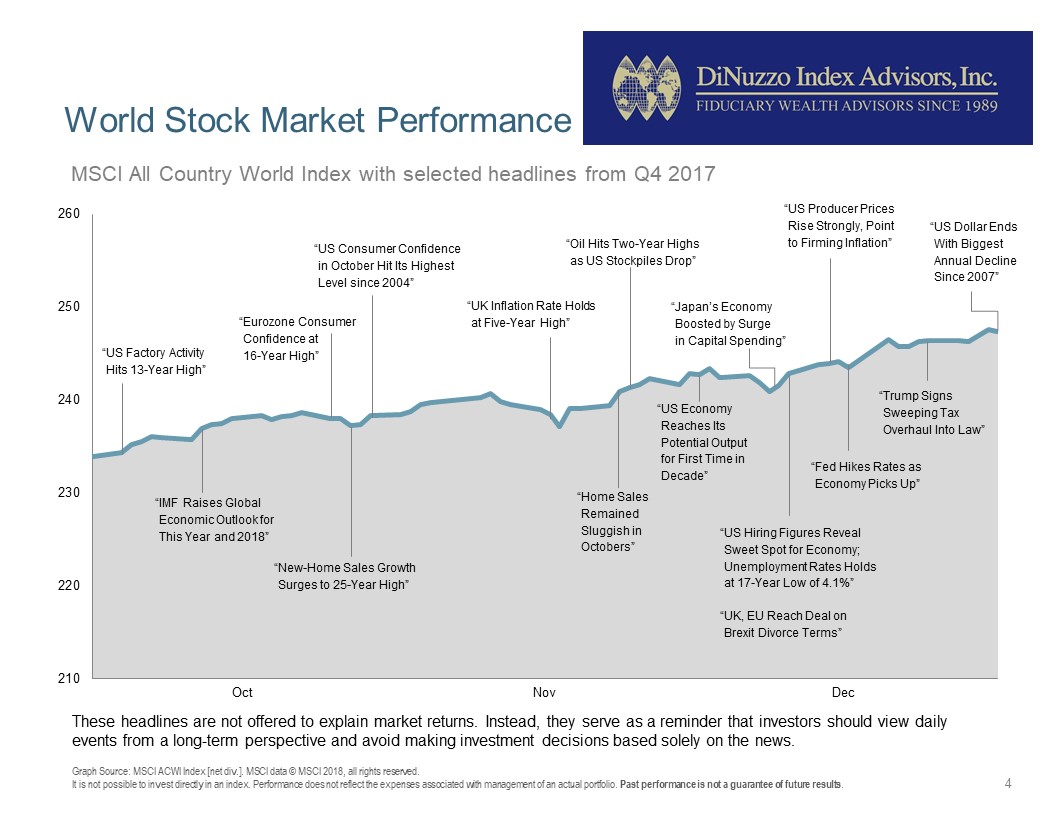 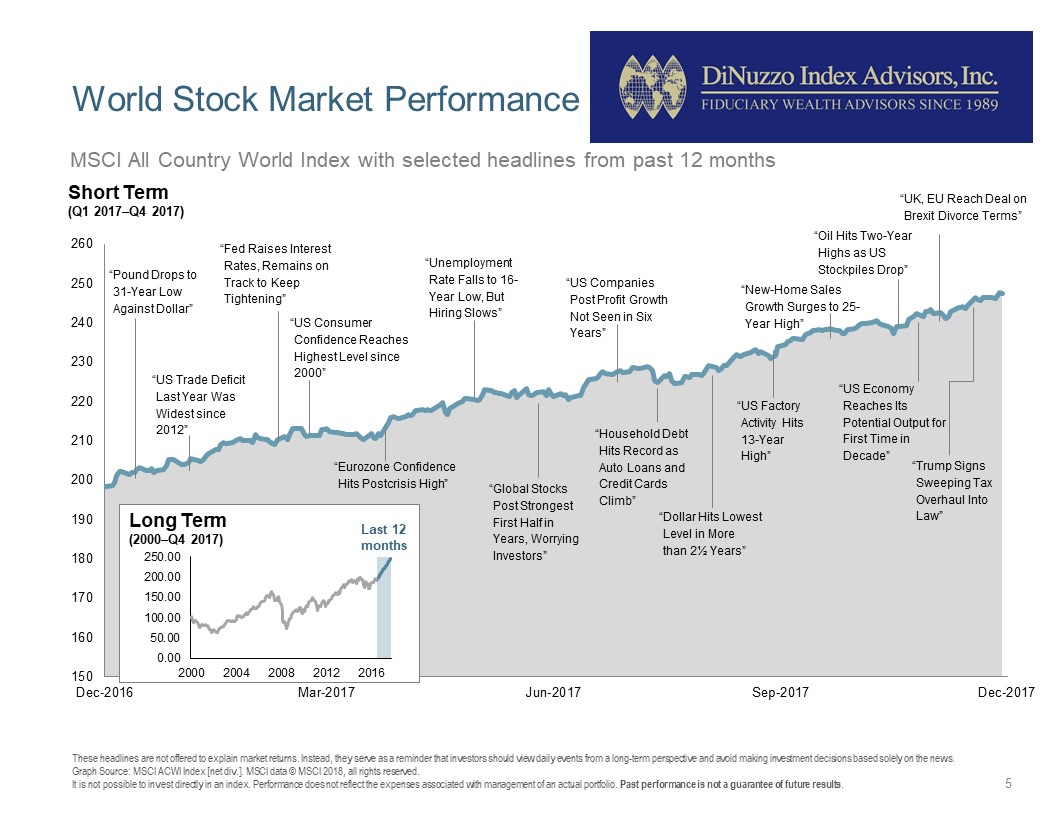 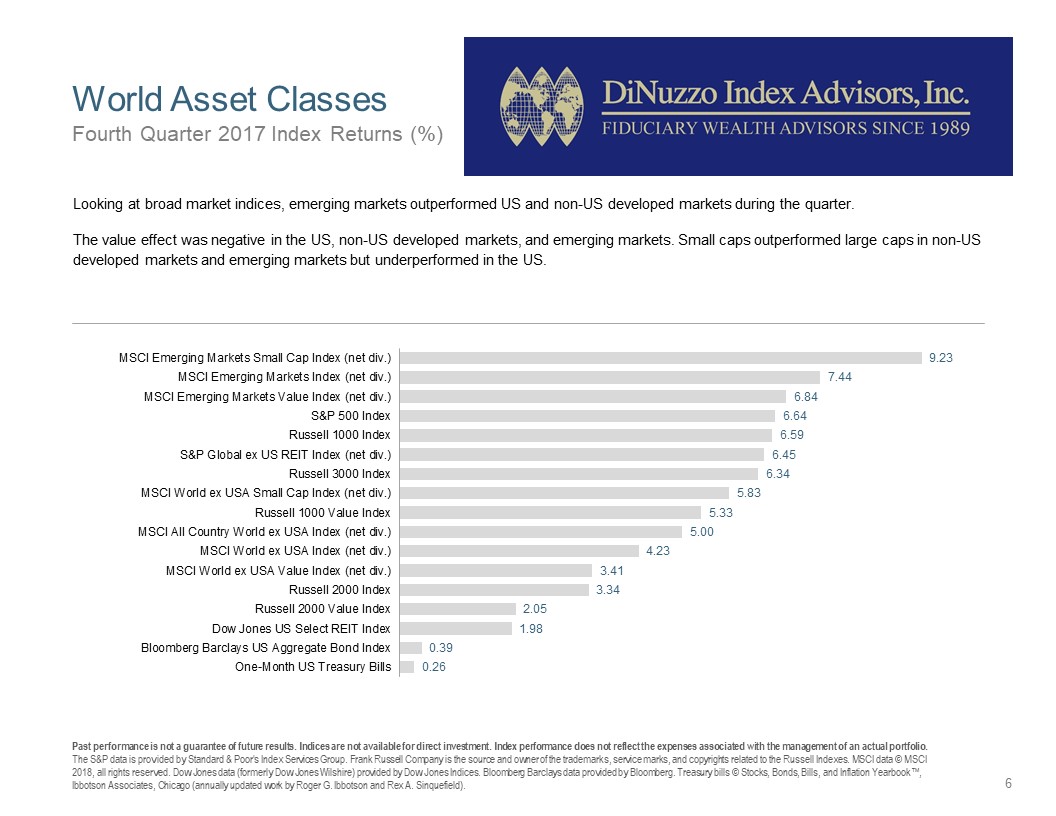 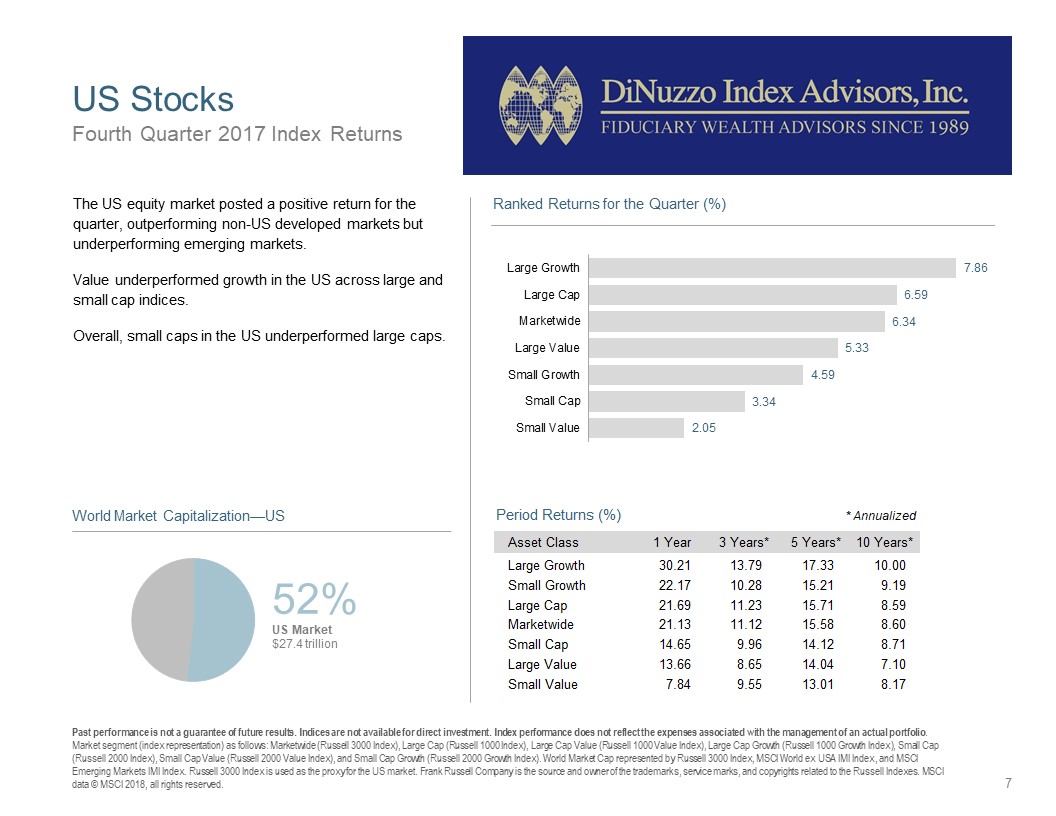 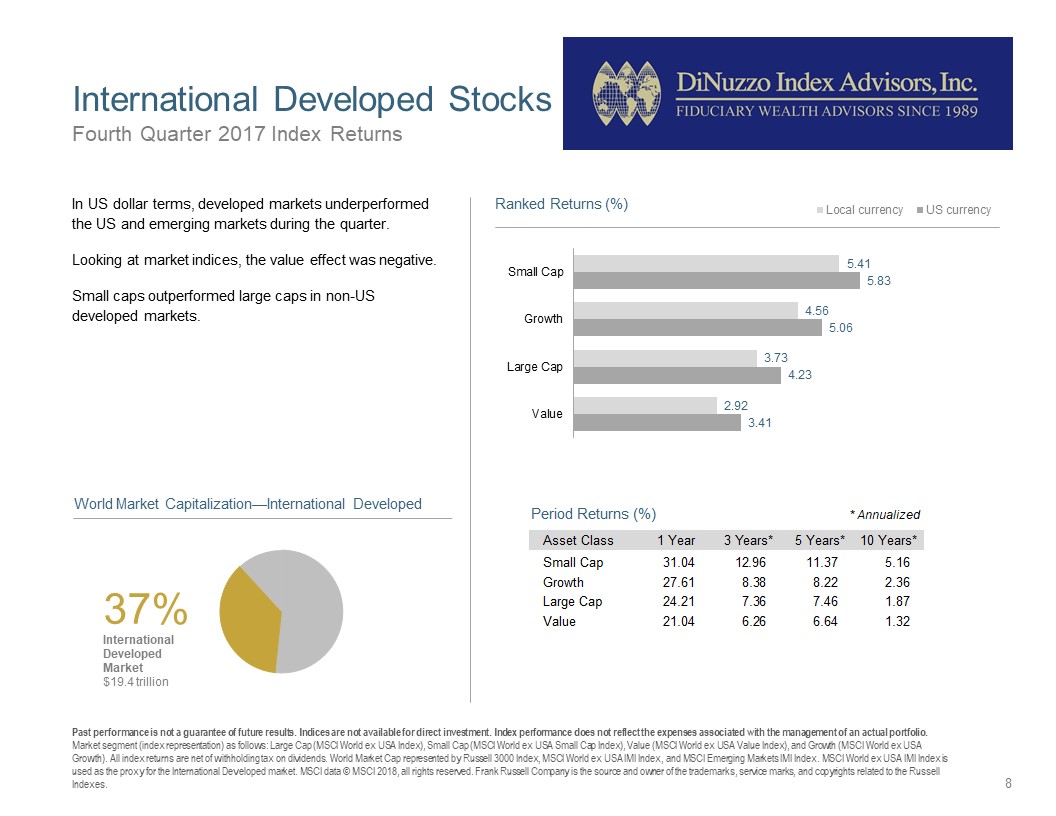 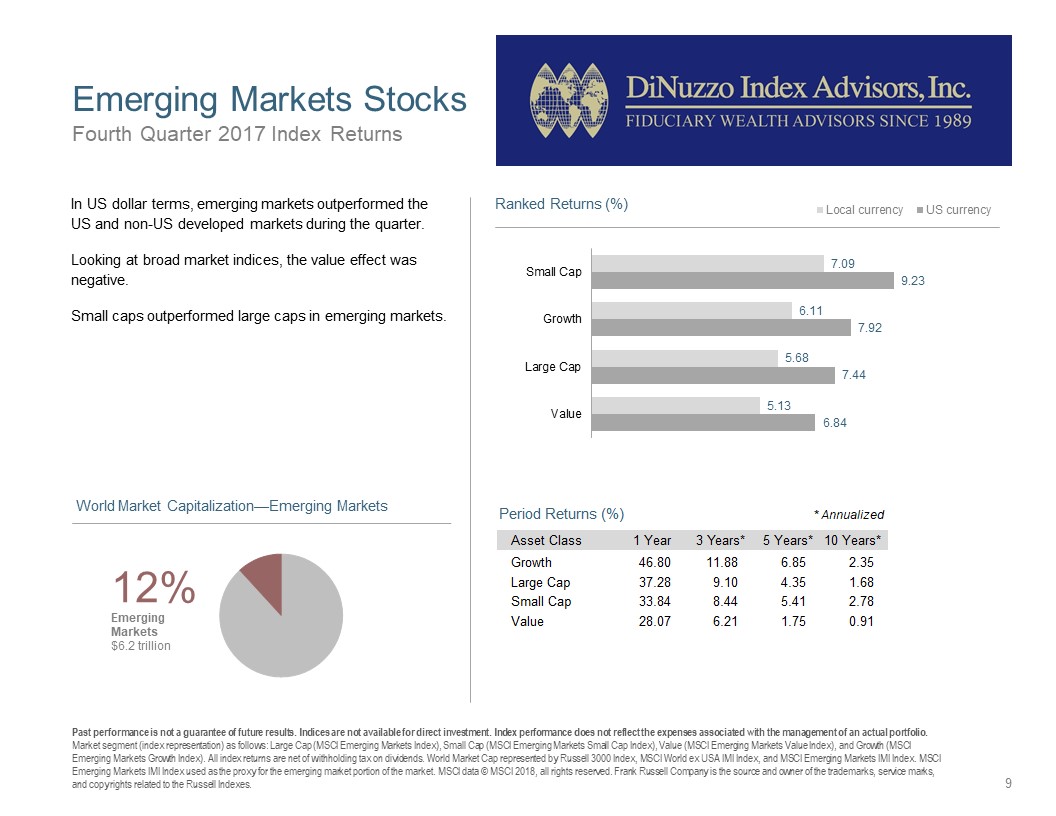 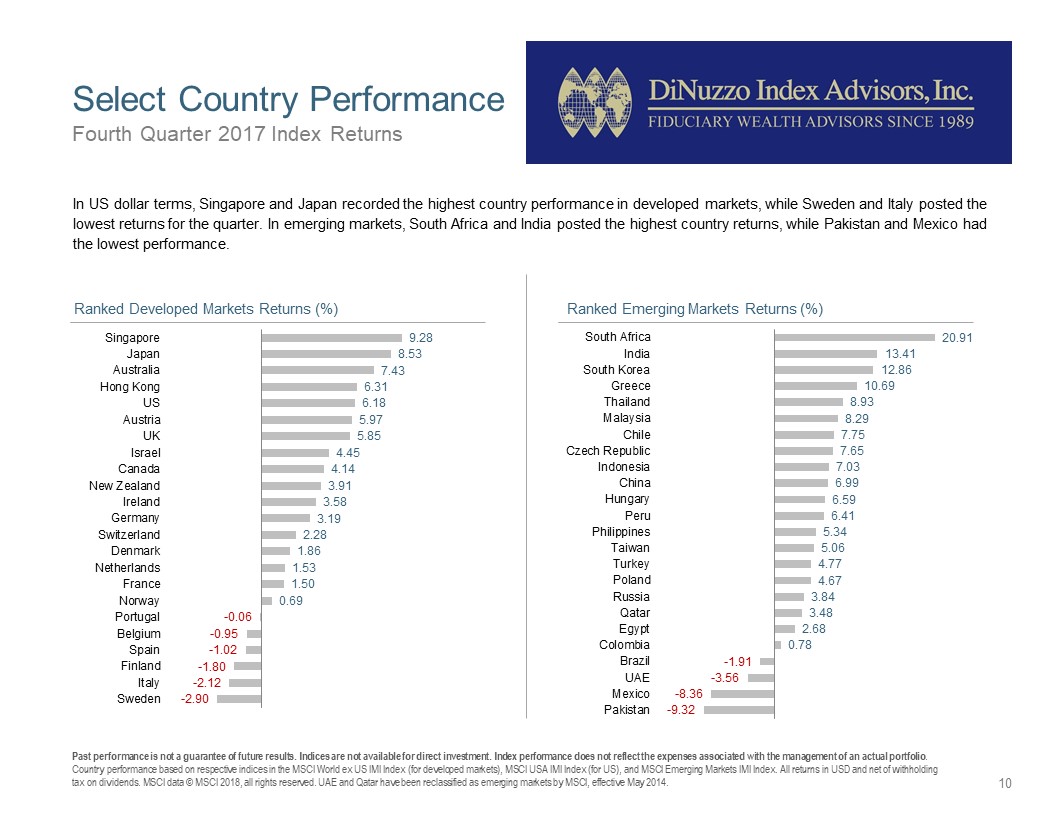 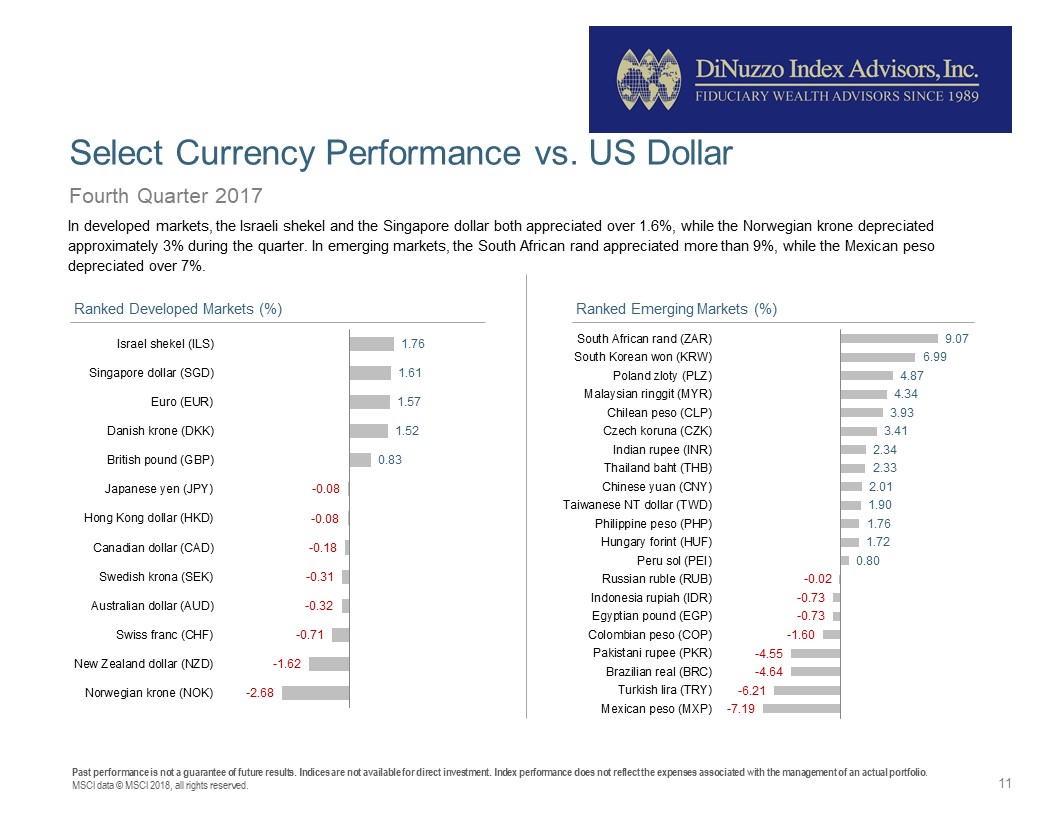 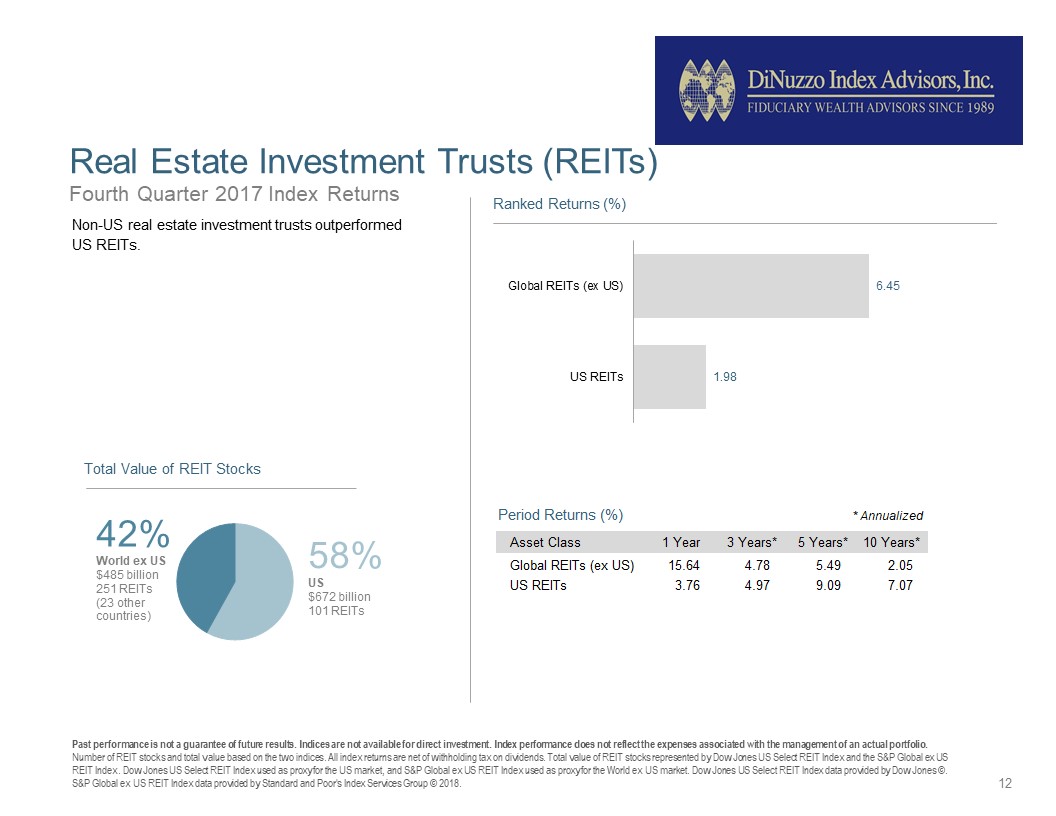 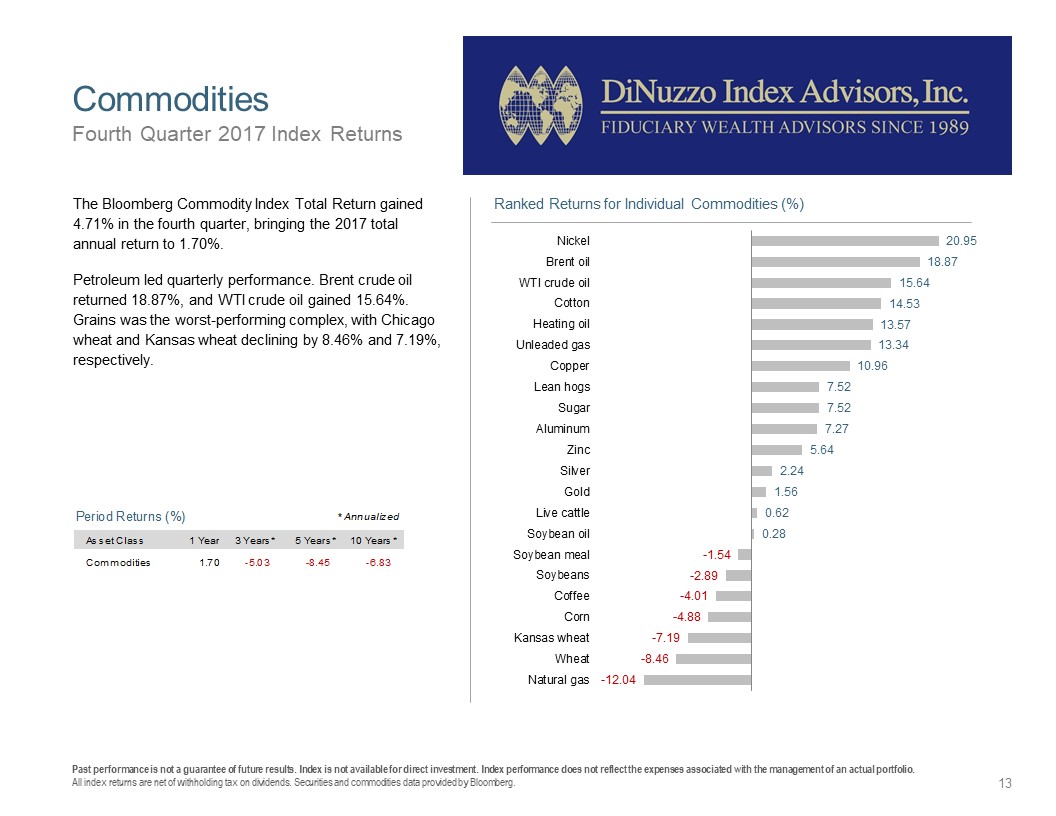 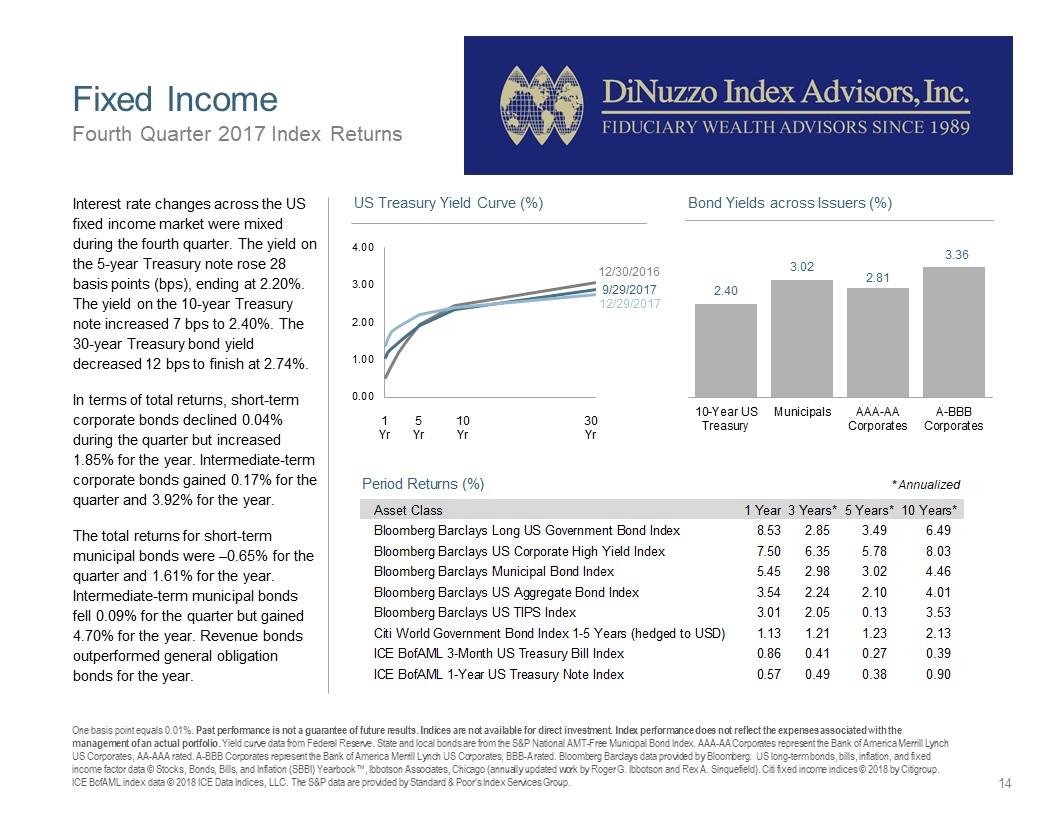 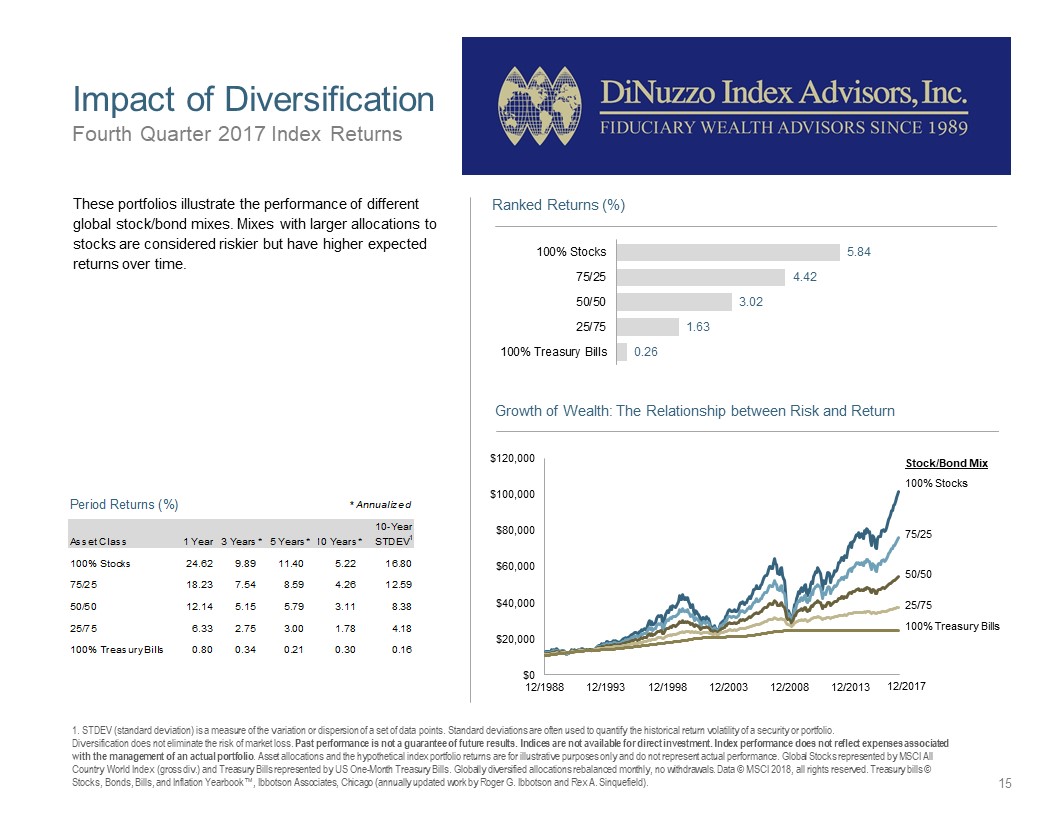 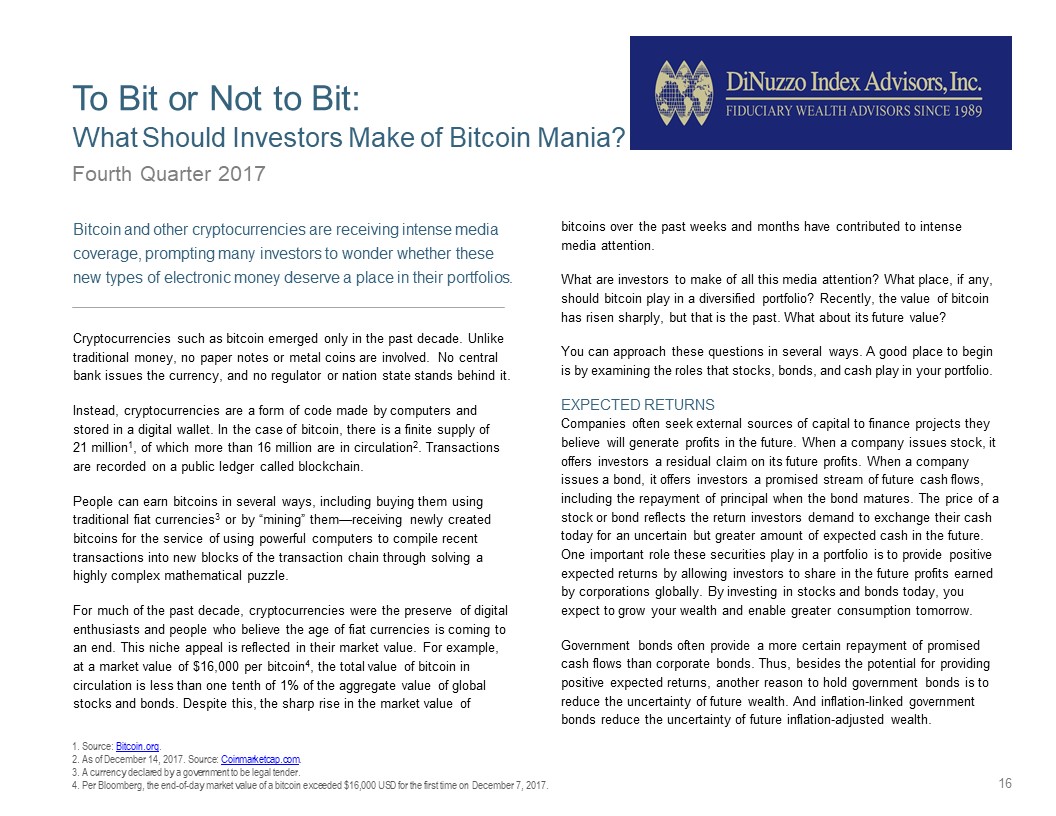 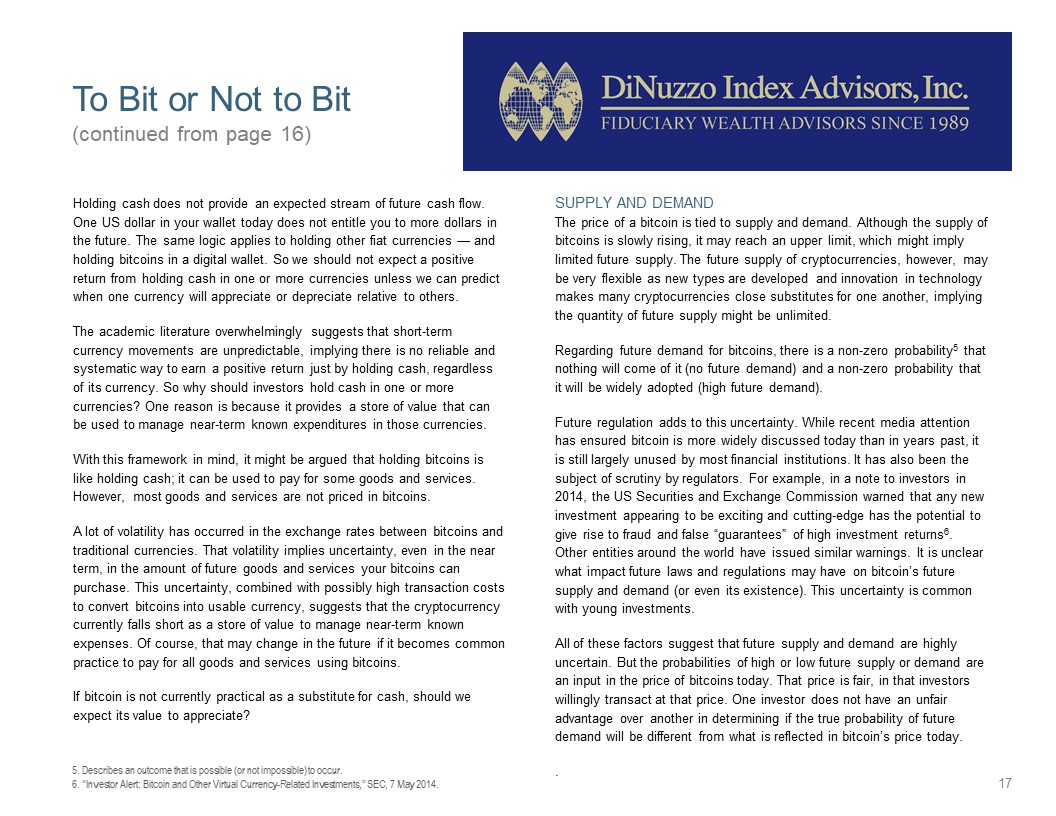 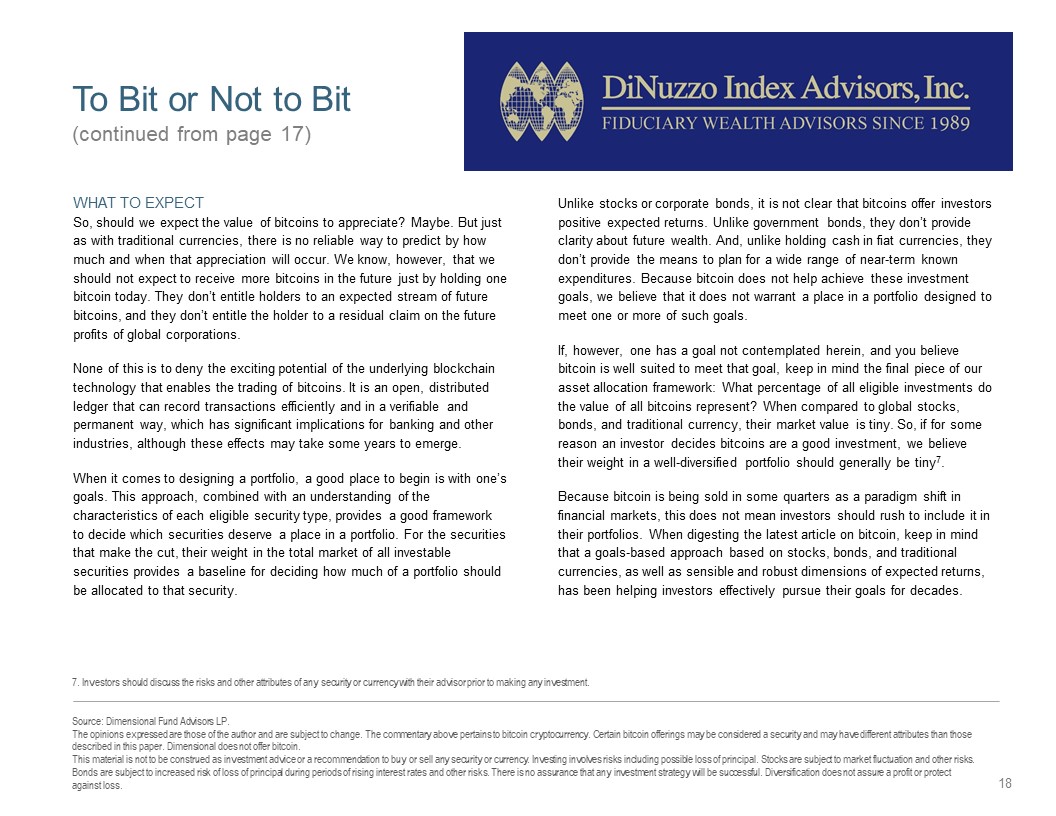