We are deluged with numbers like how many jobs were created this month and last month, or the ever-fluctuating

number of jobless claims, or number of people who may or may not have stopped looking for work.  The most recent Bureau of Labor Statistics report says that U.S. employers had 4.635 million job openings in May, which is up from 4.464 million in April.  The Labor Department recently released its latest reporting, telling us that non-farm employers hired a “seasonally-adjusted” 288,000 workers in June, and we are told that the unemployment rate now stands at 6.1%.

The accompanying chart puts the current and historical U.S. labor situation into much clearer perspective.  It shows the number of unemployed persons per job opening as of last week, and the same number going back to 2001.  Back before the “tech wreck” bubble burst, there was approximately one job seeker per job opening.  That doesn’t mean that everybody was trained or suitable for every job, but it does indicate that finding work was probably not impossible for able-bodied and skilled individuals. 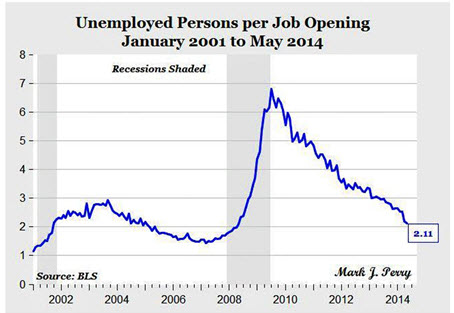 During the Great Recession, that number jumped up to an average of roughly 7 job seekers for every opening.  Today, after an extended choppy improvement in the prospects of workers, there are 2.11 unemployed workers for every job opening, and the trend is the friend of the unemployed.

This chart shows, perhaps more clearly than other indicators, an improving economy and tightening labor markets, which usually signals more competitive pay packages as companies start doing something they haven’t been doing for years: actually competing for qualified workers.  That, in turn, could cause the Federal Reserve Board--which watches unemployment numbers closely as it sets rates--to raise interest rates sooner than expected.  It may also raise the cost of doing business for companies throughout the economy, raising the inflation rate as those extra employment costs are passed on to consumers.

In addition, as economist David E. Kelley has pointed out, more jobs at the tail end of a market expansion can add an unexpected boost to GDP growth by raising corporate capital spending.  In a presentation in San Francisco, he recently said that when companies lay off people, and then eventually start hiring back to previous staffing levels, they really don’t need to buy anything new.  They can give their new employees the cubicle, computer and desk of the fired workers.

But once they’ve replaced the jobs lost, the next hire needs new equipment.  “What we’re seeing now is that the economy is going to need capital spending to go with the improvement in employment,” Kelley told the group, “and we are starting to see that in capital goods orders.”

For investors, higher inflation, higher interest rates, but more unemployment and higher GDP, is kind of a mixed bag.  But at least the jobs situation can be better understood with this new chart, and more jobs and higher salaries are ultimately better for the American people as a whole.